Back to Profile Gallery > Daybreak Oil and Gas 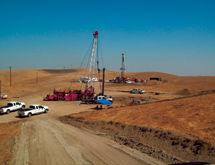 When Jim Westmoreland came on board Daybreak Oil and Gas Inc. in 2007 as president and CEO, his 24 years of experience in the industry told him that the small company needed to rethink its oil developments. “I began to look into the operations and it became apparent to me that participating in the wells Daybreak was participating in was very risky,” Westmoreland recalls. “The wells were deep, very expensive wells, and any failures would be financially devastating for a small company like Daybreak.”

The company then set in motion a plan to sell its operations in Louisiana, Alabama and Texas and, with the proceeds, it started assembling a large acreage in Kern County, Calif. Daybreak ended up acquiring 35,000 acres of leases and began conducting 3-D seismic surveys

In 2009, Daybreak began drilling on its Sunday No. 1 exploratory well. “Our wells are shallow wells, easy to drill, no exotic completions such as fracking, so they are less expensive than a lot of wells drilled these days,” he says. “It ends up costing around $300,000 for the complete well, versus the other wells we were previously doing, which were several million dollars.”

Since the success of Sunday No. 1, Daybreak has drilled 22 wells, 18 of which have been successful. The company also put together the Sunday Central Processing and Storage Facility to handle its particular needs. “Our oil is considered heavy oil; it is 14 to 16 API (American Petroleum Institute) gravity oil,” Westmoreland explains. “We have to heat the oil in order to get it to pour, which means that – in order to get it out of the tanks and into the trucks – we have to heat it up to 150 to 160 degrees.”

Setting up the processing facility required some upgrades in infrastructure. “We had to run about three miles of power lines to the facilities because there was no power out there at all,” Westmoreland says. “We now have a state-of-the-art facility that works well. We use electricity to heat the oil; we do it at night, when the rates are lower.”

Daybreak continues to explore and drill and recently finished an eight-well drilling program in which it drilled seven successful wells. “The company is currently producing, net to the company, 20 to 25 barrels of oil per day,” Westmoreland says. “We expect with these new operations to be soon producing 50 barrels a day.”

Westmoreland predicts that this increased oil production will enable the company to continue its steady growth. “The thing about these wells is that they will produce oil for 20 years or better, so they will keep a steady cash flow to keep the company operating and possibly expanding to other areas in California,” he says. Daybreak finds itself in a position to consider new opportunities in the area. “We still see a lot of opportunities in our acreage, but we’re not opposed to looking at new opportunities in the San Joaquin Valley, or elsewhere as long as it fits our criteria which is shallow oil less than 5,000 feet which is where we’ve developed our expertise,” Westmoreland says. “We just want to make sure the new opportunities fit our profile. We are looking exclusively for oil, not gas.

“We want to develop shallow oil wells that cost less than a million dollars to drill and complete. We don’t want them to be too involved with fracking, which sometimes cost more than the drilling of the well. We are looking at conventional completions, just like the ones that have helped this business grow for the last 100 years.”

Although Daybreak is a small company, it is set up similarly to the larger oil companies, which Westmoreland thinks gives the company an advantage. “We have the leases in hand, we have the seismic data over the leases,” he says. “We’ve drilled exploration wells and found oil, and we have built production facilities to process that oil. Now all we have to do is drill wells.”

Daybreak, he says, “has put together all the pieces just like a big oil company. We now have the capital to develop and grow the company and create substantial value for our shareholders.”