Back to Profile Gallery > DCD Mining and Energy 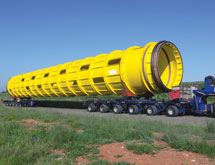 An international provider of manufacturing and engineering products serving the energy, mining and other sectors is entering a new era of its operations.

South Africa-based DCD, formerly known as DCD Dorbyl (Pty) Ltd., rebranded and restructured itself in 2012 in an effort to expand its local operations worldwide. The company is now comprised of four clusters:

The four clusters combined are comprised of nine business units, each of which has a long history of operation. DCD Dorbyl (Pty) Ltd. initially was established in 1947. “We are well-known worldwide for our products serving the energy and mining sectors,” Manager of Marketing Hendrik Schoeman says.

“This further entrenches DCD as a preferred partner to governments and the market leader in heavy engineering in Africa,” Schoeman continues. “The group is also now ideally positioned to capitalize on development in emerging economies worldwide, and on niche industry expansion in developed economies such as the U.S.A., Europe, India, Australia and China.”

DCD Heavy Engineering supplies heavy mechanical equipment such as large ball and sag mills used in gold, copper and platinum mining. DCD is one of the leading suppliers of these large mills worldwide, according to the company.

DCD Venco produces medium to heavy fabrication equipment, manufacturing and mechanical component refurbishment. These include dump trucks, bulldozers, wagon tipplers and mills. The unit can fabricate and manufacture products up to 50 tons.

The Mine Support Products unit manufactures underground support systems used in mining, specifically the ROCPROP roof support system, which it exports to other African nations as well as the United States, United Kingdom and Australia.

Market Expansion
The restructuring will position DCD as one of the leading providers of equipment within its markets. “In the current economy, the markets we serve are very competitive,” Schoeman says. “In order to succeed, we need to ensure we are the leading player in these markets. We feel this restructuring will strengthen our current capability to continue servicing both in the global market as well as the local South Africa market.”

DCD hopes the new focus will allow it to grow its revenues from $500 million to more than $850 million annually. “We know and understand the sectors we serve, and feel this will allow us to expand our business by giving us a focus on four individual markets,” he adds. EMI