DESFA was established in 2007 to operate the National Natural Gas System (NNGS) that transports gas from the Greek-Bulgarian border, the Greek Turkish border and the LNG receiving terminal on the Revythousa Island in the Gulf of Megara to consumers in continental Greece.

The business, which was founded on 30th March of that year following the provisions of law 3428/2005 on the liberalisation of the natural gas market, is a 100 per cent subsidiary of DEPA, which is the Greek public gas corporation. Under this move the Greek NNGS was transferred from DEPA control to be fully operated by DESFA, making the business responsible for operating, managing, exploiting and developing the entire NNGS system and its connections in order for it to be economically efficient, technically sound and integral to serving the needs of Greek natural gas users in a safe, adequate, and reliable manner.

The network that DESFA is responsible for provides natural gas to Greek consumers and consists of the main gas transmission pipeline and its various branches, the border metering stations that are situated at Sidirokastro, near Serrers and at Kipi, near the Evros River, the LNG receiving and regasification terminal at Revythousa Island, and natural gas and metering stations. In addition, it includes natural gas control and dispatching centres near Athens and Thessaloniki, operations and maintenance centres and an advanced remote control and communication system.

The main transmission pipeline under DESFA’s responsibility has a total length of 512km and a design pressure of 70 barg, and travels from Promachonas, which is on the Greek-Bulgarian border to Attica. Along this route are various transmission branches, with a total length of 706km that supply natural gas to the regions of Eastern Macedonia, Thrace, Thessaloniki, Platyt, Volos, Trikala, Oinofyta, Antikyra, Korinthos, Thisvi, Attica and Evia Island. In order to maintain complete efficiency of the pipeline it features line valve stations to be used in emergencies or scheduled maintenance, scraper stations for cleaning operations, cathodic protection to prevent corrosion and fibre optic cables for remote supervision and communications. 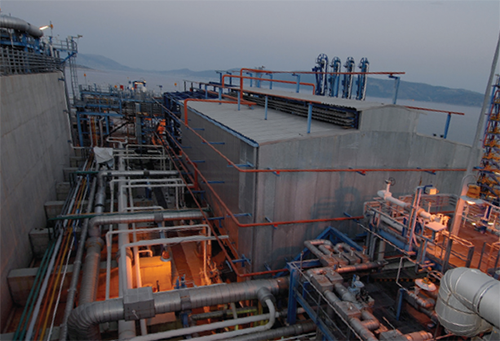 A key asset of the entire NNGS is DESFA’s LNG terminal at Revythousa Island. Situated just 500 metres from the shore of Agia Triada in the Pachi Gulf of Megara, the Revythousa terminal represents a state-of-the-art facility and a major national asset for Greece as it secures energy supply, provides operational flexibility and enhances the capacity of meeting consumer peak demands. The terminal has been in operation for more than ten years and is designed and operated in accordance to the strictest safety and technical specifications. LNG arriving at the terminal is stored in two tanks with a total capacity of 130,000 cubic metres, is regasified and is then supplied to the NNGS.

Upon taking control of the network in 2007 DESFA initiated a significant investment and update programme at Revythousa that continues to date. The first upgrade phase, which took place in 2007, saw the upgrading of the terminal’s receiving and regasification capacities. This project, which at the time represented one of the most important investments to ever be carried out in Greek energy infrastructure, enabled the terminal to receive larger ships, thus increased LNG capacities, tripled the processing capacity of the terminal and increased the overall supply capacity to the national transmission system.

Further upgrades to the high performance electricity and heat co-generation unit occurred in 2009 and more recently DESFA has commenced the second upgrade phase by undertaking feasibility studies into the construction of a third LNG storage tank and further increasing gasification capacity.

Investment and improvement into the network is an ongoing and major part of DESFA’s overall operation. Alongside the work at Revythousa, DESFA has a number of significant projects under construction and/or commissioning. These include the building of a compression station at Nea Mesimvria, Thessaloniki, and the installation of a number of new metering and regulating stations. The expansion of the high-pressure transmission network to Aliveri, on the Island of Evia, started its commercial operation in November 2012.

Keenly aware of its duty to continuously improve the NNGS, DESFA also has projects it is working on for future development. One of these is ‘Megalopoli’, which involves the expansion of the high-pressure transmission network from the Agioi Theodoroi region to the area of Megalopoli in Arcadia. The organisation is also involved in the Greek input for the cross border South-Stream project, which is being developed to import new Russian resources to the EU.

Throughout all of these developments DESFA’s key aim is to be recognised as an excellent operator of the Hellenic Natural Gas Transmission System in Europe. The organisation realises the importance of achieving an efficient and reliable transmission network, as well as the future role that LNG may play in the European energy mix. Acknowledging this, DESFA is a member of a number of international organisations, such as GIE, where it plays a major role in determining future energy policies and developing important relationships to expand natural gas infrastructure. As natural gas looks set to play a vital role in Europe in the coming years there is little doubt that DESFA will be one of the key organisations in achieving a balanced and secure energy supply for the continent.