Det norske oljeselskap ASA (Det norske) has had a vibrant history in the Norwegian oil and gas industry since it was founded in 1971 as one of the first Norwegian oil companies.

In 2007, the Norwegian interests of DNO were merged with the activities of Pertra ASA. Founded in 2002, Pertra was the first Norwegian company operating on the NCS in the last ten years. At the same time, negotiations were underway for a further merger with Aker Exploration, which became effective from December 2009 under the name Det norske with Aker ASA assuming the position of largest shareholder.

Today Det norske is the second largest operating company on the NCS with regards to number of operatorship’s, exploration and drilling activity. This includes an aggressive drilling programme secured by long-term rig contracts, including one with Aker Barents until 2014. This rig is owned and operated by Aker Drilling, and is considered to be the most advanced offshore mobile exploration unit in the world.

Capable of operating under the most demanding conditions, the rig is designed to meet the harsh weather conditions of the offshore NCS such as rough seas, strong winds, wave heights of up to 35 metres, and even ice in some areas. It can operate at water depths of between 100 and 2000 metres, with the potential to extend this to 3000 metres.

Importantly, Det norske has been shrewdly investing in its well portfolio over the last few years operating nine exploration wells in 2009 with additional involvement in five partneroperated wells. This was followed by nine exploration wells, including three appraisal sites in 2010 making a grand total of 15 wells with partner-operated assets. This year Det norske intends to operate ten wells in addition to several partner sites, and has safeguarded its drilling operations until 2012 through secured funding. 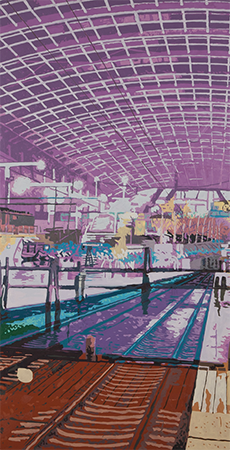 Equally, the company has taken important steps throughout 2010 and 2011 in order to reach its goal of becoming an oil company that is fully capable of both developing and operating fields. In this respect, Det norske is working on maturing its Draupne, Frøy, and Jette assets into possible developments. The Plan for Development and Operation (PDO) for Jette was submitted in September. Although the field itself is a relatively small development with regards to other North Sea projects, it also marks Det norske’s first field development as operator. This represents an important milestone for the company – not least in its goal to increase production from its current 2000 barrels of oil per day (bopd) to 15,000.

Located just to the east of the Jotun field, Det norske intends to produce Jette through two horizontal wells, tied back to the Jotun floating production, storage and offloading vessel (FPSO). Based upon a 30 per cent recovery rate, Jette is predicted to contain about 14 million barrels of oil equivalent (mmboe). Production is projected to begin in the first quarter of 2013, with average daily production in the first year to be around 14,000 barrels – of which around 9000 barrels will accrue to Det norske. The success of this development will also place Det norske in a much stronger position for tackling some of its larger projects, such as Draupne.

To date Det norske has been scheduled to participate in a total of 13 exploration wells this year, where it will also hold the role of operator on four assets. Of particular note, has been the major gas discovery in the Norvarg prospect of the Barents Sea licence, where Det norske is a licence partner alongside operator Total E&P Norge AS. Even before the exploration well was completed, preliminary data favourably indicated gas at three different levels. On closer inspection, there are indications that the discovery could hold between ten and 50 billion cubic metres (bcm) of recoverable gas, which corresponds to between 63 and 315 mmboe. Most significant has been the discovery of a 400-metre interval reservoir in the Kobbe formation, which, following a production test, has suggested a strong maximum flow rate and higher-quality gas.

The most important discovery in Norway for many years is Aldous Major South. This was discovered by Det norske together with the operator Statoil ASA, and partners Petoro AS and Lundin Norway AS. Initially it was estimated that the discovery could hold between 200 and 400 mmboe, however new figures suggest that this could be doubled to 400 to 800 mmboe. As owner of 20 per cent of the license, this translates into a figure of between 80 and 160 mmboe for Det norske.

It has also been confirmed that the reservoir in Aldous Major South is connected to that of the Avaldsnes field to the east, which is operated by Lundin Norway. Based upon a combined resource estimation this Aldous Major South/Avaldsnes discovery could prove to be one of the ten biggest discoveries ever made on the NCSClearly Det norske is entering a phase of extensive activity, with many developments beginning to come to fruition and discoveries coming on line. This correlates well with the company’s ambitious policy and plans for continued growth. At the heart of this is using smart solutions, and selective resources to get more out of each reserve.
This promotes value not only for the business and its shareholder, but also society on a wider level as users of these fuel sources