Det norske oljeselskap (Det norske/Detnor) is a leading Norwegian companyoperating within the oil and gas industry on the Norwegian continental shelf.

Its roots date back to 1971 when Det Norske Oljeselskap (DNO) was founded. It received its first revenuesin 1974 through a shareholding in the British Heathfield and began its first Norwegian license in 1984. For a long period DNO was not active on the NCS. But from 2001 DNO was back on the scene. In 2007 the company merged with Pertra to establish Det norske oljeselskap ASA (Det norske). In 2009 Det norske merged with Aker Exploration, and Aker ASA became the new major shareholder in the company. Since then Det norske has continued to expand andremains energetically active within the industry. The company head office is based in Trondheim, with offices in Oslo and Harstad. Today Det norske has over 230 employees and is currently listed on the Oslo Stock Exchange with the ticker DETNOR.

Today Det norske is pursuing an aggressive exploration programme concentrating on its work with new exploration models in mature areas on the Norwegian shelf. Det norske has been involved in a number of fields and significant discoveries. The company is active in a number of oil fields including Atla, Varg, Jotun, Jette, Ivar Aasen and Johan Sverdrup. 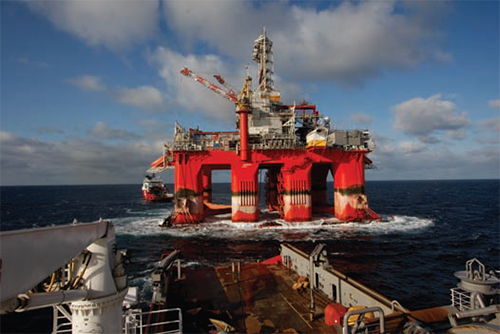 In fact, its involvement with the Ivar Aasen project is a key development for the company, asthis field is Det norske’s first major development project as operator and is a project that represents a cost of 25 billion NOK. During the first quarter of 2013 the Norwegian Councilof State recommended the development of theNorth Sea field and the Norwegian Parliamentapproved permission to develop the areaon 31st May. The site is expected to deliver 16,000 boepd net to Det norske by 2016 with production set to increase to 23,000 boepd by 2019. Det norske as operator has signed a preunitisation agreement to work in partnership with production license 457. The agreement allows for a co-ordinated development of oil field discoveries and sets out principles for the work process towards an initial unitisation split. The unitisation agreement is set to be finalised by June 2014 and once completed, the Ivar Aasen facilities are expected to improve project economics and extend the life of the field.

The Ivar Aasen field is situated west of the Johan Sverdrup field in the North Sea – Johan Sverdrup is Det norske’s largest asset. The Johan Sverdrup field is not only vast in size; the quality of the reservoir is also world class. The porosity is high, often exceeding 30 per cent. What sets the reservoir on Johan Sverdrup apart from many others is the coarse grain size. This entails large pores and exceptional flow properties. The properties of the reservoir have been thoroughly documented through production tests in several of the wells. The most recent production test was performed in well 16/2-17S, located in the central part of the field. The well 16/2-17S (Fault Margin) confirmed an 82-metre thick oil column, of which 49 metres were of very high quality.

Moving into the future Det norske is currently set to maintain is current momentum and further develop its holdings on the Norwegian shelf. It is a dynamic company capable of fluid and adaptable expansion with a programme of optimised portfolio development based on strategic relinquishment and farming in and out of licenses. This allows it to remain active in the areas where fields are most cost-effective and offer optimal future returns. An extensive exploration programme to discover new fields as well as to further develop drill potential for current projects supports its keen eye for market development. During 2013 Det norske plans to spend NOK 1500 million on exploration and intends to participate in up to ten wells.

The company is proud of its reputation as the fastest growing and most ambitious oil company on the Norwegian shelf. It believes in smart solutions and maintains a culture of an enthusiastic, entrepreneurial spirit amongst its staff. Equally, Det norske is keen to work closely with contractors to encourage cutting-edge technology to create new approaches and solutions. This energetic approach to the oil and gas market sets Det norske oljeselskap apart as a truly engaging business with an ever-expanding portfolio of discoveries.