Back to Profile Gallery > Detour Gold 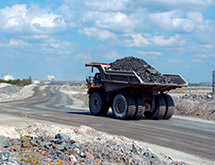 In its first full year of commercial production, the mine at Detour Lake in northeastern Canada produced 456,634 ounces of gold. With the startup phase over, the mine’s owner, Detour Gold, is focused on reaching full production and finding new gold deposits in the area.

Detour Gold formed in 2006 after acquiring 100 percent control of the Detour Lake goldmine in northeastern Ontario from Pelangio Mines. A 2010 feasibility study completed by BBA Inc. showed the open pit mine should produce approximately 649,000 ounces of gold annually during the anticipated 16-year life of the mine.

Production began in September 2013 and activity has been ramping up every month since. After topping 450,000 ounces in 2014, Detour Gold expects to produce between 475,000 and 525,000 ounces of gold in 2015, according to the company’s 2014 end-of-year report. Detour Gold uses a gravity process followed by leaching to recover 91 percent of the gold dug out of the ground.

Through the first half of 2015, it appears Detour Gold will hit those production targets, though the company saw some challenges early in the year. Issues with conveyors and ore movement were compounded by the frigid winter weather in the first three months of 2015, causing the mill to operate only 78 percent of the time. That lower operating time led to 105,572 ounces of gold produce for the first quarter.

But the conveyor belt problems were resolved by mid-February, according to the report, and the processing plant soon returned to design capacity. In the second quarter, production rose to 125,348 ounces of gold – a 6.8 percent increase from the second quarter of 2014.

The company continues to improve its milling capacity and mining rates. By the end of 2014, the average mill throughput rate reached 54,310 tons per day (tpd) and a mining rate of 234 tpd, according to Detour Gold’s year-end report. Refining its equipment and finding new efficiencies have further increased activity. The processing plant has been operating at its design capacity of 55,000 tpd since March 2015 and milling rates reached 2,712 tons per operating hour (tpoh) in the second quarter of 2015 – well beyond the design rate of 2,500 tpoh, according to Detour Gold’s quarterly reports.

Seeking New Deposits
By the end of 2014, Detour Gold had 14.9 million ounces in gold reserves, giving it the largest gold reserve among producing Canadian goldmines, according to the company’s website. But the ore-rich area of Ontario has other lucrative veins waiting to be discovered.

The company is still evaluating a deposit located less than a kilometer northwest of the Detour Lake mine. The deposit, called Block A, has undergone 160,000 meters of drilling tests since 2012, according to Detour Gold, and has an estimated resource of 2 million ounces of gold.

On its own, the Block A vein would likely not justify expansion, the company says, but it could be developed alongside the Detour Lake mine to improve production without significant investment. The evaluation of Block A is being conducted in conjunction with the review of the life of mine plan for Detour Lake, which should be completed by the end of the year, Detour Gold says.

Other surrounding deposits hold more potential than Block A. Last year, the company completed 14,874 meters of drilling in 40 holes about six kilometers south of the existing Detour Lake gold mine. Through those efforts, it identified a promising mineralization system in the area, called Zone 58N. To explore Zone 58N, Detour Gold allocated $2 million for a limited drilling program to test the depth extension of the system.

Testing began in January and crews drilled eight holes totaling 5,700 meters. All eight holes intersected the mineral system and six of them returned significant gold mineralization. “The opportunity to identify and define a high-grade gold target is extremely valuable to us,” President and CEO Paul Martin said in a statement. “With the success obtained from this drilling program, we now plan to initiate a much larger in-fill drilling campaign on Zone 58N to better define the grade continuity of this mineralized system. Our team is excited about our exploration successes and looks forward to unlocking the potential of our prospective large land package.”

Further exploration began this summer with a $5 million program to use three drill rigs to drill about 50 holes totaling 30,000 meters. Detour Gold expects the program will be sufficient to determine the underground gold potential of the area.