Back to Profile Gallery > Downhole Products

Established in 1994, Downhole Products is an internationally recognised leader in the design, manufacture and supply of casing accessories and completion tools for the drilling industry.

With its headquarters in Aberdeen, Scotland, and additional offices in the US, Asia and the Middle East, the company’s vast portfolio includes a range of centralisers, reamer guide shoes and cable clamp protectors.

In 2008, the company was acquired by Varel International, a global manufacturer of high performance drill bits for the oil and gas industry. Managing director of Downhole Products, Ian Kirk, discusses some of the benefits this has brought to his company, and elaborates on the way in which the two companies work together: “Now that we are part of Varel International, we have access to a huge international database, which has given us more of an impetus to expand on a global scale. It is an effective pairing, as we are ultimately supplying the equipment that lines the hole being drilled by Varel International’s drill bits.”

Downhole Products provides its equipment to both oil operators and drilling companies, spanning the likes of ExxonMobil to Chevron. The company’s ability to secure contracts with some of the world’s most influential names in the oil and gas industry stems from a reputation for reliability and innovation, according to Ian: “The quality of our products is second to none and we are always looking to bring new innovative solutions to the market place. We see it as an important part of our strategy to seek continual improvement and this is something we are bringing to all the regions in which we operate.” 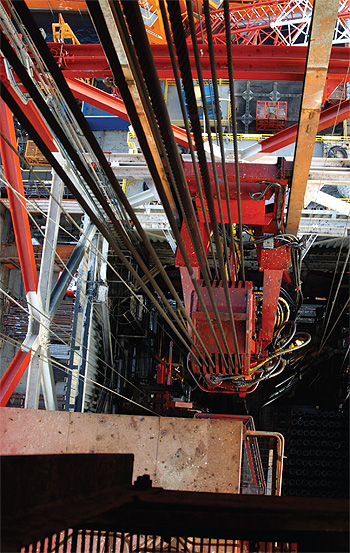 The company’s global presence is an important factor in its success, with more than 85 per cent of its turnover coming from its overseas operations. Of all Downhole Products’ global expansion projects, the most recent is the opening of its Asian office, which is situated in the Malaysian capital of Kuala Lumpur. Ian explains why, at a time when many others in the industry are cutting back on investments, Downhole Products is continuing to expand its operations: “Asia is pulling out of the recession quicker than most other areas of the world, and that is why it made a lot of sense to get our office open in the region sooner rather than later.”

Ian also expects the company’s operations in the Middle East to remain strong, with its Dubai office having now been open for more than a year. He continues: “Our operations in this region have been growing slowly but steadily, and business in that part of the world is much easier to predict as there are fewer peaks and troughs in the industry. In Saudi Arabia, for example, we haven’t witnessed much of a difference year-on-year, but at least it guarantees a steady stream of income.”

Downhole Products is always looking to expand its portfolio and, at the end of 2009, it released a new Drilling Enhanced Performance System (D.E.P.S.). Ian reveals the progress of this development: “This is a very exciting product for us as it takes Downhole Products in a totally new direction. The D.E.P.S. tool is going through real-time testing at the end of March in the USA. As the rate of drilling penetration is improving, the need for the effective removal of the cuttings is increasing as a result. This product will improve efficiency in this area and we are looking forward to getting it out into the market.”

This D.E.P.S tool is one of many products that have been developed by Downhole Products over the years, including the Spir-O-Lizer Centraliser range – one of the company’s flagship tool lines. Ian discusses how this design formed the basis of many of the company’s products today: “The Spir-O-Lizer Centraliser has been continually developed and we now have many variations for use in different markets. These are positive stand-off wellbore centralisers that are designed to lower both torque and drag by up to 40 per cent. Resistance is reduced thanks to material design, relieved angle blades which induce turbulent flow, and self-cleaning blades, which minimise build up of solids in the process.”

Another key product in the company’s portfolio is the Pen-O-Trator Reamer Guide Shoe, which is specifically designed for situations where the operators are concerned about potentially difficult wellbore conditions. Ian highlights the way in which the rapidly changing industry generates a rise in demand for such a product: “As wells are becoming longer and more complicated there is a growing need for tools that can reduce the friction for the drilling companies, and this is exactly what our designs will do. We already have over 80 patents in this area and a lot of the equipment we develop is IP protected.”

In addition to centralisers and guide shoes, Downhole Products also manufactures completion equipment, such as the Grippy Cable Protector, which features a four-point friction pad gripping system to facilitate a wide variety of API tubulars. Developed to ISO 9001-2000 quality procedures, this product also has a tapered wedge lock pin with dimples which, when inserted, secures the clamp to the tubular. The range of options available with the Grippy Cable Protector mean that it can be configured for both round and flat ESP cables, as well as SSSVs, chemical injection lines, smart well TECs and fibre optics.

Downhole Products will continue to build upon this portfolio as it broadens the span of its operations to other regions. Ian concludes: “We are also looking into the possibility of expanding into Africa, and we have a very aggressive worldwide growth strategy. In our early stages, we focused on developing our company organically, whereas now we are looking to make various acquisitions around the world. The downturn has naturally hindered the implementation of this strategy slightly, but we feel confident that we can now go ahead with our plans in order to double or even triple our company size over the next few years.”