Back to Profile Gallery > Dragados Offshore

Evolving with the times

The last 12 months for Dragados Offshore have seen the company increase its activity, taking on a number of extensive and important contracts for some of Europe and Central America’s biggest players in the oil and gas sector.

Established in 1972, its operations are based in Spain, at both its main facility in Puerto Real, Cádiz and its specialist graving dock in Algeciras, and in Mexico where it works out of a fabrication yard in Tampico.

“In Cádiz, the company is currently in the process of executing a total of five different projects,” states Jeroen Poppe, commercial manager of Dragados Offshore. “About to leave the yard to enter service is the Castor Project, a submarine natural gas storage facility able to contain 1.3 billion cubic metres of gas. As a part of this project the company has built two jackets that will be put to use at a gas storage facility built at the site of the former Amposta oil field.

“In 2010, ConocoPhillips UK awarded the company a contract as part of the Jasmine field development. This involves the construction of two large decks weighing approximately 7000 tonnes and these are expected to be delivered in the third quarter of 2012. Two other projects currently in development will eventually be found in close proximity, those being the expansion of the South Arne field on behalf of HESS Denmark and the Ekofisk project for ConocoPhillips Norway, while the fifth is currently in the detailed engineering and procurement phase. A separate undertaking on behalf of ConocoPhillips Norway, this will require the construction of both a 10,000 tonne and 3000 tonne jacket that will eventually be delivered in the first quarter of 2013.”

Business for the company has been just as buoyant at its Mexico yard, where it continues to support its long-term client Pemex. In 2011 the Tampico yard has successfully delivered a 200 bed accommodation platform and a central electrical generator platform that is currently in the process of being connected to a network of existing platforms: “Dragados Offshore is today in an enviable position where it can now target work in both Mexico and Spain that is due to commence construction towards the end of 2012, once the majority of its current projects have been concluded,” Jeroen continues. 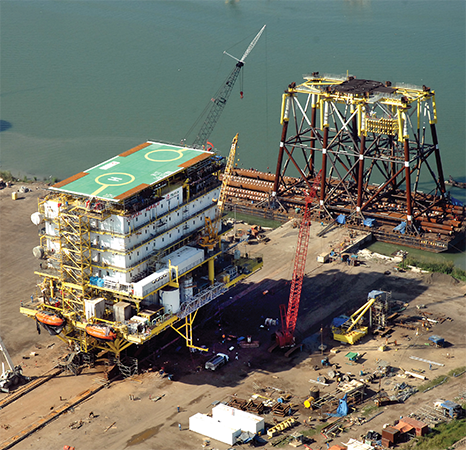 The success of the company on both sides of the Atlantic has come as a result of taking a different approach to business in each of its markets: “In Europe the strength of Dragados Offshore has long been its ability to approach each project with the perfect strategy and provide its clients with the best possible solutions,” Jeroen explains. “Historically, European clients have been known to be less focused on EPC projects, tending instead to hire separate engineering contractors and fabricators. While this has meant that the company hasn’t as yet fully developed its in-house engineering capabilities, Dragados Offshore has built up an ability to forge successful partnerships with other industry specialists.

“In Mexico on the other hand virtually all of the projects taken on by the Tampico yard are EPC based, so the company’s strength has been in developing a detailed in-house engineering capability to fully implement such projects. As such, it is the intent to export such capability for projects outside Mexico. In some cases it is difficult to break into markets like Brazil, which has regulations in place to ensure local content and services are given prominence. However in countries where these requirements are less stringent, for example the US Gulf of Mexico, Argentina, Venezuela and other Gulf of Mexico states, the company has made successful attempts to contract work that will undoubtedly help expand its focus area from its existing yard in Mexico.”

While most companies, when asked, consider 2009 to be the year their business suffered most as the global economic crisis took hold, Jeroen goes on to reveal that Dragados Offshore’s most trying time came in years before: “The real crisis, if you can call it that, for the company occurred in the months preceding the recession when the price of oil tumbled from $150 a barrel to as low as $35, an event that triggered the stalling or postponement of several major projects. With the oil price having recovered considerably in the time since, clients are initiating new projects that they now see as being more profitable in both the short and long term.”

As the company looks towards the future, Jeroen is quick to highlight that there are two avenues it is pursuing that its hopes will lead to increased growth and greater activity levels: “Dragados Offshore is looking at two particular things at this time when it comes to expanding its footprint in the oil and gas industry, those being geographical expansion and the diversification of its business. There are certain developing nations that are becoming the source of more and more work and while areas like the Middle East and the Far East are not currently part of the company’s plans, Brazil definitely is. As mentioned already Brazil does have strict local content requirements, so to overcome this Dragados Offshore needs to establish a local presence here and is already in search of suitable partners that can assist in the building of a modern, all purpose yard in the country.

“The changing nature of the oil and gas industry in the North Sea will also facilitate the need for Dragados Offshore to evolve its own operations. As time passes, the number of fixed platforms in the region will fall, while at the same time the number of deepwater floating structures will rise. This means that the company’s Spanish yards are now in need of developing deepwater solutions and facilities that can fabricate and integrate the work these future projects will require. By adding these capabilities, and exploiting the existing integration and graving dock yard in Algeciras, Dragados Offshore can ensure that it will be playing an important role within the industry for many years to come.”