The facilities themselves were first built in the 1970s, when they were owned and operated by preceded MOL, but were bought and privatised by E.ON Ruhrgas in 2006. Kardoskút is the oldest of the facilities, with Hajdúszoboszló and Pusztaederics built later; the site at Zsana is the newest of the four, having been built between 1992-1996, and it was extended between 2007 and 2009 following E.ON’s takeover.

E.ON Földgáz Storage is part of E.ON Gas Storage Gmbh, which belongs to E.ON’s Global Commodities, based in Germany; it also has a subsidiary in the UK and a branch office in Austria. The main client is E.ON Földgáz Trade Zrt. but it also works with third party clients such as the Hungarian branch of GDF SUEZ, RWE, and the Hungarian branch of Italian gas company ENI. Its clients benefit from a corporate culture based on five core tenets to deliver a superior service: integrity of service; openness of business; trust and mutual respect; the courage to deliver on its promises; and social responsibility for the local and wider community. 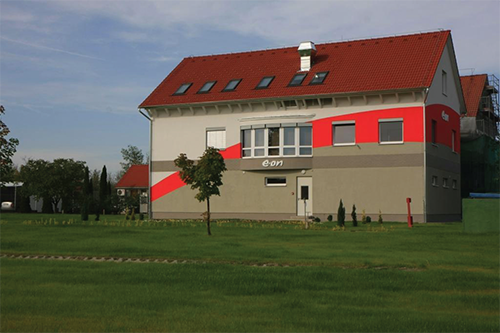 The relatively recent development of Zsana was a significant boost to E.ON Földgáz Storage’s capabilities and represents the biggest investment into the company during the last five years. Parent company E.ON invested more than 100 million euros into the site during Phase IV, which ran from 2007 until 2009 and enhanced mobile capacity by more than 400 cubic metres. Since that time, however, the crisis has bitten deeply into Hungary’s energy deeply into Hungary’s energy market causing it to become stagnant, leaving the company running at a level between 50 per cent and 70 per cent of its capacity. The Zsana investment has been costly and not fully utilised to date but, nonetheless has been an important investment for the future and enhances the storage services for Hungary.

“The last couple of years have seen the market in Hungary change,” László says. “Until 2009/2010, gas storage was used primarily as a tool for security of supply but in the last couple of years we have developed three pillars essential to the developing commercial viability of gas storage in the country. First is flexibility: we help balance the difference in demand between summer and peak consumption; this flexibility is also required as a base load for gas transportation by the Transmission System Operator. The second increasingly important pillar is price optimisation, in which we help reduce the supply cost through realising time and location swaps. The third pillar of course remains security of supply. EU gas consumption is expected to rise 20 per cent by 2020 so we expect our own market to begin rising in the coming years.”

The chief operating officer goes on to highlight some strong prospects for the future: “There are a couple of streams coming online around Hungary that we are looking to be involved with. First is South Stream, which is expected to be active by around 2017, will be an excellent opportunity for us because of the line’s proximity to our storage sites. Because we operate commercial and not just strategic storage hubs, Hungary’s increasing demand for storage following the introduction of South Stream will come directly to us. Plans for Nabucco West, currently under development, also require a buffer capacity that we can provide.”

Whilst the long-term future for E.ON Földgáz Storage appears bright, with plenty of business and new opportunities, the company must face an unpredictable market in its immediate future. The Hungarian energy sector is experiencing turbulence as its landscape shifts with Government looking to optimise its presence, whilst the demand for energy currently remains stagnant as an ongoing result of the financial crisis.

“At Pusztaederics there is a two-step plan of development underway,” László explains. “The first stage is to refurbish and reconstruct the withdrawal capacity and equipment at the site, and that is currently being executed. The second stage is to install new compressors in the plant. This work is part of ensuring our assets remain state-of-the-art, reliable, and safe. In total it will cost more than ten million euros, making us one of the biggest investors in the Hungarian energy environment at present. In the long-term we do not plan to increase our capacity: the main target is to keep it functioning as efficiently as possible through these types of refurbishments.”