E.ON Gas Storage GmbH is amongst the leading gas storage operators in Europe, working with partners as a builder-owner, operator and service provider on a number of key projects within the gas sector.

The company has 15 storage facilities in Germany alone and more than ten billion cubic metres of working gas volume, stored underground throughout Europe either in salt caverns or in depleted gas fields. The imported gas, supplied on a continuous basis by the producing countries, is being injected at times of low demand or price and stored until it is retrieved during the times when it is most needed.

Peter Klingenberger, managing director of E.ON Gas Storage GmbH, elaborates on the company’s capabilities: “The North of Germany is blessed with a lot of salt deposits and, in the north-westerly town of Epe, we operate the largest salt cavern storage facility in Europe. With roughly two billion cubic metres of working gas volume spread across a network of 36 caverns. 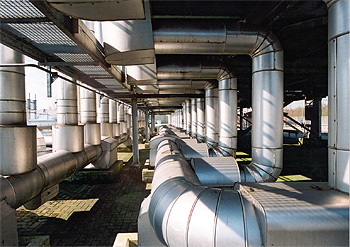 The unique conditions that make Germany optimal for gas storage are also present in Hungary, a country in which E.ON Földgáz Storage Zrt., fully owned by E.ON Gas Storage GmbH, is the sole storage provider and operator. Peter explains: “Our activities here encompass porous rock storage facilities and over 4.2 billion cubic metres of working gas volume split into four storage facilities of which Zsana is the biggest. We completed an enhancement to that plant last year, increasing pressure injection and withdrawal capacity, at an investment of around 130 million euros.”

Another region where E.ON is investing in gas storage is England, and operating as a wholly owned subsidiary of E.ON Gas Storage GmbH, E.ON Gas Storage UK is responsible for developing, building and operating storage facilities in one of Europe’s largest gas markets. Founded in 2008, this UK arm has been commissioned with the task of running some of the company’s most important gas-related projects. David Dorsett is this division’s head of business development, and he explains more details about the principle of the UK gas storage facilities where E.ON Gas Storage UK is investing: “The Holford salt cavern storage project  s currently under construction in Cheshire, and the Whitehill farm project in East Yorkshire is currently in the planning phase. Our initial challenge to start with was the successful construction of the Holford project, which will have a capacity of about 156 million cubic metres of gas, and we are well on the way to achieving this goal.”

There are two different sorts of gas storage options – depleted fields, and salt caverns, which can be found where there are salt deposits. David explains the salt cavern process: “We are essentially carrying out a process called solution mining in which we dissolve the salt to brine, which creates a cavern where gas can be securely stored. For this facility we are creating eight caverns, and that will take a few years from start to finish. The first phase of three caverns will be operational at the end of 2011, and by summer 2013 we should have all eight caverns operational with a total of 56 million therms of capacity. In terms of size it may not be the largest project, but it is unique in that it is fast churn and that we can inject or withdraw ten per cent of its capacity on any given day. When you compare that to the average daily UK demand of around about 320 million cubic metres, Holford could meet about five per cent of that.”

While David mentioned that Holford isn’t at the large end of the scale for this sort of project, Whitehill, E.ON`s second gas storage project in the UK, is on a much bigger scale. “Whitehill is almost three times the size of Holford, but it is still fast churn. This means we can take advantage of daily movements in market prices, and because we are still going through planning for Whitehill we have got the flexibility to change the design of that project to meet the market demand,” he explains. “Engaging with the market to understand what their requirements are is something we are

The changes in the European gas market have driven E.ON to invest in this new storage technology, as David highlights: “The UK continental shelf production is declining – at one point 70 or 80 per cent of our supply came from the North Sea, but currently that is probably in the region of 50 to 60 per cent and declining. The balance of our supply now comes from a range of other sources, such as importing gas through the Interconnector from Norway and LNG.

“The North Sea was the major source of flexibility in the UK market, so now we have to question where that flexibility will come from, and one of the key sources will be gas storage. Plus we also have to consider the security issue that surrounds relying less on the North Sea and more on imported sources of gas. Gas storage obviously addresses both of those aspects – the flexibility and the security.”

Many of the challenges faced by E.ON are related to how to structure and distribute the gas that is imported. Peter notes: “The Baltic pipeline’s Nordstream project will see 55 billion cubic metres per year capacity coming on-stream, on a load factor of almost 100 per cent. Furthermore we will be seeing imported flows from Norway, which will run on full load. Germany will be the meeting point of increasing gas streams from Norway, the Netherlands, and Russia, and we honestly believe that from that geographical position, it’s essential to have storage facilities here to structure these imported flows. On top of that we see – and it’s particularly true for the UK – an increase of the number of LNG receiving terminals and this is another stream of imported gas that will come into Europe, and it needs to be modulated according to the seasonal demand and also the demand of all the traders in all the markets.”

David also notes that the UK’s gas market is headed towards an even more volatile period: “I think the number of gas-fired power stations will increase, as will wind generation, which again means that there could be a lot more flexibility required in the gas supply market, which can be addressed with gas storage. That is where a fast churn storage facility like Holford becomes very valuable because it can respond to those daily signals. It does not have to just inject during the summer and withdraw during the winter. It can be optimised from day-to-day and week-to-week so it’s a project that will be typically cycling more than once a month.”

Peter continues with his perspective on the changes in the German gas market: “We see a stable or non-growing demand from households, because there are various trends today that work against increasing gas consumption, such as strict legal requirements for house insulation and triple glazing. There’s also an enormous growth rate for renewables and heat pumps, decentralised energy production and so forth.

“In addition, in Germany we are in discussion about the replacement of coal-fired stations, and phasing out nuclear, but so far there is no clear concept as to what will substitute these fuel sources. If it’s to be substituted with gas then we see a clear increase in demand for gas-fired power stations thus creating an even stronger demand for gas storage, but this is all pending.”

To remain ahead of the competition in what is a very exciting market, E.ON is heavily investing in several projects – in addition to the Holford and Whitehill storage locations already mentioned it is also participating together with RAG in 7Fields in Austria, and a variety of pipeline projects. Peter explains: “7Fields is a storage facility of roughly two billion cubic metres of working gas volume near Salzburg. We also believe that we will see the development of a hub at the German Austrian border, where the much talked about Nabucco pipeline would end, plus we are involved in the Tauern pipeline, the Cross pipeline project towards Italy. Finally we are building the Etzel EGS plant in Northern Germany, which is a cabin project and which will give another two billion cubic metres of working gas volume.”

Both Peter and David are looking forward to what the future brings for E.ON Gas Storage. David commented: “The Holford project will start operations next year and it is unique in that it is fast churn. Plus, we are actively moving forward on our Whitehill project and expect to get full planning consent this year and demonstrating that it has a place in the market and is an attractive investment opportunity. Looking beyond those we definitely see ourselves as a major player in the UK gas storage market.”

Peter concludes: “We will become one of the backbones of the gas supply chain here in Germany, and that means that we need to complete all our construction projects on time and on budget. We’re also trying to further safeguard the geological sites where we have the opportunity to build storage facilities, because they are becoming more rare – not every geological strata is suitable for gas storage facilities. From my point of view, this is of major importance, because if we don’t do that then we won’t be able to build any more storage facilities. That’s why we are further developing Whitehill in the UK, as we really want to keep a geological site ready for the next investment decision to come.”