Back to Profile Gallery > E-Tech Group

E-Tech Group started life in 1994 as BCD Cables and Peto Services, when Gary Williams, Paul Brown, Adrian Dawes and Derek Rose gave up their secure employment in the oil, gas and marine industries to risk everything by forming their own electrical services company.

The premise of this was to fill a perceived gap in the market, which they had identified, for an electrical engineering service offering the ‘total solution’ in these sectors. Whilst there were similar enterprises in the market, none fully encompassed every aspect of a major project. This clear USP gave the entrepreneurs the proviso they needed to start the business.

The company began by procuring and re-certifying equipment, primarily electrical cables through its BCD Cables, which was found to be surplus to requirements at the end of projects, from shipyards and offshore fabrication sites. This proved to be very successful and the funding generated allowed the foursome to expand and further develop the business. Following its original concept, the company created a unique total solution service for electrical projects in the marine and offshore industry. Director and co-founder, Gary Williams, describes the factors involved in the company’s formation: “At the time, there were many electrical contractors dealing in the oil and gas, and marine markets, but we wanted to take this service a stage further. Our service involves bringing in-house all the items that are normally outsourced by a contractor, giving us far better control of the supply chain.”

In the years that followed, the company expanded quickly through mergers, acquisitions and organic growth to a point where its founders felt they had covered the major service elements of the business. However the acquisitions 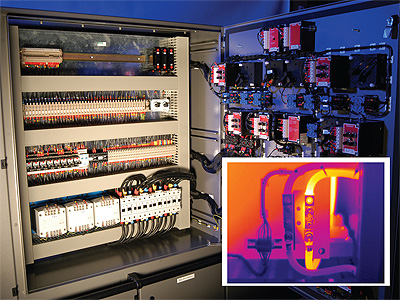 of other companies, which retained their names, had led to the business becoming somewhat fragmented and confusing for customers and staff. At one time the group consisted of fourteen different limited companies with a variety of trading names and appearances. As a result, in 2004, having reached a steady annual turnover of around £10 million and a permanently employed workforce of nearly 200, the business’ growth reached a plateau. To solve this growth challenge, the company embarked on a twoyear plan to create a single name and identity – E-Tech Group.

“The effect of the rebranding was almost immediate,” explains Gary. “It made a tremendous difference to us as a company – suddenly the clients could see the whole package that we offered and they could also see the size of the business clearly. Previously if we were tendering for a large project we would have to show several sets of accounts and explain the connection between the companies, but now it was all very clear to see. Our turnover started to increase, and over the next few years we leapt from £10 million to £16.5. The turnover continued to grow soundly and last year it reached £23.5 million, this year, despite the global recession, we’re on target to exceed this again.”

Alongside the mergers and acquisitions, the company also expanded globally. To date, E-Tech Group has established 11 bases across the UK, as well as three bases in mainland Europe, one in Dubai and more recently it has established a facility in Ghana. Gary elaborates: “Ghana has been identified as one of the growth areas in the West African oil and gas market. We’ve been there right from the start, having worked in the area for over two years, and invested very heavily in our operations there. From this new location, we are offering extensive support, logistics and engineering services to the operators and we are rapidly establishing ourselves in the area.

“To achieve this, we’re working very closely with the major operators, and with the Ghanaian National Petroleum Corp (GNPC). Having been granted free-zone status, we are able to operate from our own free-zone location and we’ve also secured several facilities to support our new base. We are looking to develop and assist a network of like-minded forward-thinking companies, which can complement our work and support each other.”

Finally Gary looks to the future of E-Tech Group, explaining how the business will develop and sustain its growth in the coming years: “We believe one of the key factors of our continued success is our ability to diversify. Our core skills are in the oil and gas, and commercial marine sectors. Our electrical engineers and technicians already possess the skills sets and have experience in these areas. However we are always looking for ways to apply our knowledge and expertise to different industries. We’ve looked for other sectors that require the same skills so we can secure new revenue and grow the business further.”

He concludes: “The future for us lies in ensuring we can maintain steady growth – we’ve reached a point where our turnover and profitability is growing steadily and that gives us, and our clients, the confidence to begin aiming for larger projects. The size of project we can bid for seriously depends on our own financial infrastructure, and so as we grow we aim move up to different levels of projects. This will be our focus for the future, we already have good steady core business in many areas and we will build and expand on that.”