Back to Profile Gallery > EAB Engineering

When EAB Engineering was first formed in 1952, the Norwegian company was a consultant in mechanical engineering.

Following decades of experience as a consultant for industry and offshore, the company shifted its outlook in the early 1990s to become a supplier of subsea oil and gas equipment for pull-ins and connections, subsea tooling, installation equipment, and permanent modules in the pipeline infrastructure. Alongside this it continues to offer a range of services including front-end engineering design (FEED) studies, and detailed design analysis.

In the three years since EAB last featured in European Oil & Gas Magazine, the company has experienced major growth to its workload and production volume. This can be credited to several reasons that Harald Bakke, managing director, outlines: “This year we will double our turnover compared to 2011. This is partly due to the conditions in the subsea market, which are very good compared to most other business sectors nowadays. It is also to do with a general improvement in market standing resulting from a more widespread reputation as well as greater appreciation from our main customers. Furthermore our main shareholder, Framo Engineering, was bought completely by Schlumberger last year and appointed to the Centre of Excellence for Schlumberger subsea activities worldwide, giving them new tasks and possibilities in the huge organisation. We have benefitted from this too.”

EAB works with some of the world’s largest subsea names including GE Oil & Gas, Aker Solutions, and FMC Kongsberg Subsea as well as dominating SURF companies like Technip and Subsea7. Through these, EAB has been directly involved with many of the pull-ins and connection systems currently available in the North Sea. Its products and services are delivered throughout the rest of the world too. Business has been growing in the Mediterranean during the last three years, for example, particularly in Egyptian waters. EAB’s standard pipeline end terminal (PLET) and in-line TEEs have been popular, but so have the more specialist high integrity pressure protection systems (HIPPS) modules, which increase safety by enabling the shut down of portions of large fields.

During the last year, EAB has also been delivering its largest subsea soft landing cylinder order to GE Oil & Gas for its work on the Gorgon Field, offshore Australia. To date more than 70 cylinders have been delivered to this project at a total order value of more than 15 million NOK. The cylinders themselves are large: three metres in height when fully extended and each unit weighing approximately two tonnes. A single cylinder, however, offers 400 tonnes breaking force and is being used at the Gorgon Field for landing structures up to 1000 tonnes. More than 400 subsea softlanding cylinders of this patented type are sold on the world maket 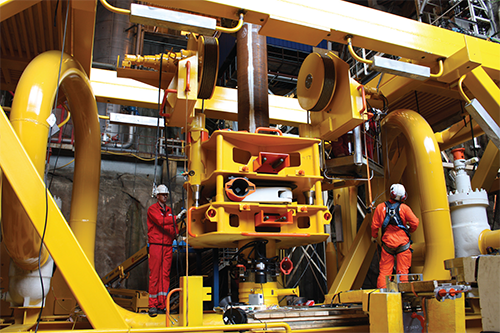 Harald discusses EAB’s growing business further: “We have an extremely strong home market, with a steady and growing number of projects in the North Sea. However, we also are seeing expansion of our reputation outside of this region, in the Mediterranean and Australia. In fact, Australia and the Far East are the markets we believe EAB will face significant expansion in the near future. Although it is more difficult to enter, Framo is already established there and we will take advantage of that to grow substantially in the years to come.”

Following its rapid expansion of business, EAB has to some extent become a victim of its own success. The biggest challenge it has faced during the last two to three years is finding enough experienced people to meet the capacity required for all its orders. What EAB does – the products it produces and services it delivers – requires very specialised knowledge and to train new employees strains the already limited resources of the company, so finding new people with the correct skill set has become essential. The potential impact of a subsea disaster is enormous; the increasing awareness of safety and reliability has also placed greater demand on EAB’s resources by requiring more testing, analysis and verification. “That is good, of course, but also demanding,” Harald says.

These challenges are not holding EAB back, though, and the company already has an array of projects lined up for the future. Ocean Installer awarded the company an EPC contract for the design and delivery of a 110-tonne tee manifold that will be installed during summer 2013. EAB also won a contract with Subsea7 for the delivery of three subsea structures to the Knarr field, operated by British Gas, in the Norwegian North Sea. Furthering its presence in Australia, EAB has also signed a contract with GE for an activator retriever tool (ART) to be used in GE’s Gorgon field projects. These actuators weigh up to 25 tons. Actuators require specially designed equipment for retrieval and re-installation in connection with maintenance. EAB is in the process of entering into contracts for delivering ARTs for several new projects.

As the selection of upcoming projects suggests, EAB’s business looks set to continue growing. “It looks like there will be a very steady business in the subsea market worldwide until at least about 2020, and our home market in particular will be very hot during this period,” Harald says looking forward. “EAB now has a very well established organisational model for executing these projects. Having become part of Schlumberger’s subsea strategy, we are moving into new offices and building a new test hall. We have a good standing in the market and are now preparing to expand our output capacity by two or even three times over the coming years.”