Back to Profile Gallery > EAB Engineering AS

EAB Engineering AS is a second generation, family run business that has been inoperation for the last 61 years.

It was foundedby Even Andreas Bakke in 1952 working with ropeways and transportation systems and is currently overseen by managing director Harald Bakke, who took the reins of the company in 1981. Under his stewardship EAB became involved in the subsea sector in 1989 and has since garnered a reputation for making big wavesin the industry. So much so in fact that recently the company became part of OneSubsea, which is a prestigious reflection of the high level ofexpertise and regard EAB has earned over the years. The company is currently based inNorway where it is considered a leading name insubsea development.

Prior to becoming part of OneSubsea the company operated throughout the 90s,developing close working relationships withthree of Norway’s main subsea and offshore operators, Kongsberg (now FMC Kongsberg),ABB Offshore Systems (now GE Oil and Gas)and Aker Kvearner (now Aker Solutions). During its time EAB was focused mainlyon supplying tooling to Norway’s subsea operators, however it quickly developed a soundknowledge base within the industry throughconsultancy work and its effective tooling solutions. Before long the company becameinvolved in the development and delivery of tools for subsea intervention and connection.With its growing confidence these areas wouldgo on to become key market areas for EAB and help to define it as a relatively small buttenaciously driven company. “We participated in developing various connecting tools thatcame on the market in the 90s,” Harald begins. “That includes spool connection systems, subsea winches, hub cleaning and inspection tools, seal replacement tools as well as tools for installation of Flowlines and Risers (FLT’s). We also developed and delivered the Flexconnect system to Technip, which was the beginning of a long-term relationship with the company.” 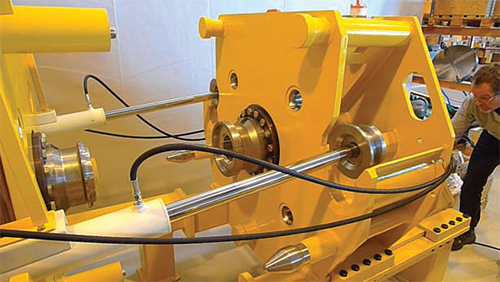 This early involvement within the subsea sector proved to be a significant advantage for EAB. Not only was it able to enter the market on the ‘ground level’, but it was also crucially able to identify itself among larger contemporariesas a highly skilled and innovative operatorwithin the sector. Today this has culminated in a number of important benchmarks for the business. Firstly as its confidence has grown, EAB has diversified its product range to include permanent subsea infrastructure in conjunction to its extensive range of subsea tools. Its permanent subsea structures include pipeline end manifolds (PLEM’s), pipeline end termination (PLET), riser bases, pigging stations, TEE’s and Manifolds. As such, serving known companies like Technip and Subsea 7 the company now attributes around 70 per cent of its business to permanent equipment sales, while the remaining 30 per cent is still centered on tooling. Within its scope of equipment provision EAB has delivered its own products that have demonstrated great value for the subsea market, as Harald elaborates: “We supply our Flowline Lifting Tool – FLT’s, which is close to being the industry standard, and even more so we supply our patented soft landing cylinders. These are delivered to provide a controlled and damped landing for almost any structure that is designed to be placed on top of another piece of equipment. These structures can be large, with weights up to 1500 tons or more, and of course operators are very concerned about a potential crash landing. These structures can cost several hundred million dollars so protecting them is very important. The EAB soft landing system is becoming firmly engraved as an industry standard and most of the larger players are using it as part of their standard equipment. More than 600 cylinders with braking capacity from a few tons to 450 tons have been delivered.”

Another major boon for the company has been its inclusion within the OneSubsea Group. Built on the strong reputation EAB has earned and on its unique subsea experience the partnership offers the company massive potential growth, as Harald explains: “For us to become part of the OneSubsea family has been quite a nice experience actually. We are a small company of 50 employees with a turnover of 35 million to 40 million dollars, but we were very well received by the top management of OneSubsea and we have already benefitted from this. We have been given responsibility for certain areas within the group’s subsea activities, one of which is that we service the installation companies as we are the only unit with the expertise in what installation companies really need.”

Elaborating on the technical impact of becoming part of OneSubsea Harald reveals: “It looks like the EAB connection system (ECS) will be part of the portfolio for the group and that will have a very large impact on the turnover for our company. The connector market is I think worth around two billion dollars so to even gain a small portion of that will mean substantial growth for EAB.” ECS is a clamp connection system for horizontal and vertical connections with a range from 6” to 24”.

Moving into the future EAB will continue to draw on its strengths as it develops its relationship with the OneSubsea family and readies itself for larger projects. “I think one reason we are where we are is that we have shown ourselves to be trustworthy,” Harald says. “We have gained trust in the market place through years of success. What I mean is that the consequences of faulty products or bad design are tremendous in the subsea industry. For one thing, installation vessels are expensive so if you make a mistake or if the module is difficult to install you could be losing millions of dollars a week. Likewise, if you have a spillage or problem with the structures then that could be catastrophic. We feel our customers value our track record and our capabilities.

“We have also shown that we are able to act discreetly, which is important when you consider that we have often provided solutions for competing service suppliers and installation companies, so in this respect being trustworthy has been vital.”

One of the most exciting challenges EAB anticipates over the coming years is in getting acquainted with the OneSubsea family. “We have to market ourselves to an organisation of 6500 employees, so getting to know the rest of the group will be a focus for us,” Harald explains. “We are also very focused on developing EAB in a sustainable way, while trying to avoid the problems that can be associated with growth. The next few years will be very exciting.”