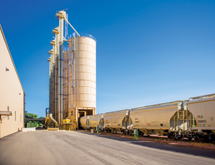 Some companies focus on only one portion of the energy industry, but Emerge Energy Services LP offers a unique combination by focusing on two, CFO Robert Lane says. Based in Southlake, Texas, Emerge Energy manufactures silica sand for oil and gas fracking, and offers fuel processing and distribution services.

The company is the result of a combination of three companies controlled by Insight Equity, a private equity firm based in Southlake. In 2002, the founders of Insight made a pre-fund investment in Direct Fuels, an independent regional fuel distributor and specialty processor based in Euless, Texas, that recycles transportation mixture, or “transmix” – comingled refined products, usually created at the interface of gasoline and either diesel or jet fuel as they travel through a pipeline – back into gasoline and distillate. In 2008, Insight purchased Birmingham, Ala.-based Allied Energy Co. (AEC), which distributes renewable and petroleum-based refined products and also processes transmix.

In 2008, Insight also acquired Superior Silica Sands (SSS), formerly known as Texas Sports Sand, based in Kosse, Texas. SSS, which had enjoyed a strong run as a supplier of proppant to the Barnett Shale, soon found its local market shrinking as natural gas prices fell. In order to help execute a turnaround and an expansion into Wisconsin, Insight hired two industry veterans each with over 30 years’ experience in industrial minerals.

While early plans briefly considered bringing wet sand down in unit trains from Wisconsin to be dried and sold out of Kosse, Insight and SSS management decided to execute a significant expansion into Wisconsin to capitalize on a first-mover advantage in what the team determined to be a major growth opportunity to service the extraction of oil and NGLs from shale.

By early 2011, SSS had opened up a 1.2 million ton per year dry plant in New Auburn, Wis., with direct access to the Union Pacific (UP) railroad. SSS was backed by Insight Equity and multi-year, take-or-pay contracts with industry-leading oil field service companies. As market demand continued to build, SSS followed that with a second dry plant, this one with a finished product capacity of 2.4 million tons per year, in Barron County, Wis., to which the Canadian National (CN) rail way built a spur. The company also secured several leases containing “some of the coarsest Northern white silica sand reserves of which we are aware,” Lane says.

In May 2013, Insight Equity combined SSS, Direct Fuels and AEC into a master limited partnership (MLP) and took the entire company public (NYSE:EMES). Since its IPO, Emerge has enjoyed tremendous market success, generating a total return to investors of 168 percent since its IPO, greater than any other MLP IPO in 2013 and second in total return among all MLPs.

Investors were apparently impressed with Emerge Energy’s culture of rapid growth and success. The Fuel segment provides a stable business offering diversity to the MLP, while SSS is the growth vehicle business; an enviable combination for a MLP. Today, “We consider ourselves one of the leading providers of Northern White silica frac sand to the oil and gas industry,” Lane says. “We are also one of the strongest players in the transmix and fuel distribution industry.”

Knowing What’s Needed
SSS’s experience in the sand industry sets Emerge Energy apart. Three years ago, when the shale market experienced a boom, there were not many producers of high-quality, Northern White frac sand. “We got into a market where one did not necessarily have to be an established producer in order to get very strong contracts,” Lane says. Although the number of competitors has increased, many do not possess the expertise Emerge Energy has.

For instance, many do not have the right sand, Lane says. “We believe we have some of the highest quality, coarsest sand available on the market. We also believe that we are one of the largest producers of 16/30 sand today.” With over 100 million tons of sand reserves in Wisconsin, Emerge Energy believes that SSS can provide the sand that is in high demand in the oil and NGL extraction industry for the foreseeable future.

In addition, even among those that have high quality sand, not all are able to capitalize on it. “We’ve really started to see a strong differentiation between those who know what’s needed and those who don’t have the capabilities.” Lane notes SSS’s reliable service, processing experience and expertise, and logistics capabilities as competitive advantages that set SSS apart from most of its peers.

Utilizing its on-site access to the UP and the CN, SSS has one-line hauls to almost every major basin in North America, including all major basins in Texas and Oklahoma, the Marcellus and Utica basins, and the Western Canadian Sedimentary Basin. SSS also has a dozen transload sites with more to come to accommodate the needs of its customers. This combined with on-site rail storage capable of holding more than 800 rail cars between its two Wisconsin facilities means SSS can produce a better response time in filling customer orders and getting the sand to where it is needed.

Today, SSS has 3.8 million tons of finished capacity between Barron and New Auburn. With both facilities fully enclosed, SSS runs its operations year round, even in the cold and snow of Wisconsin’s winters. “We believe we can produce our proppant with low overhead and at a cost competitive basis relative to other sand,” Lane notes.

A Winning Team
Emerge Energy specializes in maintaining an entrepreneurial working environment with a flat structure. “It’s all about having highly functional teams to get the best performance possible.”

At SSS, sales, operations, logistics and billing are all highly coordinated and work well together. In addition, “Insight Equity is hands-on, giving us valuable strategic leadership and working with us in all facets of the operations.” Lane notes that Insight’s financial backing and daily involvement has been a major contributor to the success of SSS and Emerge Energy.

SSS also works closely with leading regional and industry partners, such as Market & Johnson, which built the Barron facility, and Rotex, which SSS uses for all its screeners at its Wisconsin facilities. SSS credits its relationships with its suppliers, such as Marabou Superior and Prairie Transportation, for helping the company transition through its rapid growth.

Lane predicts continued success for Emerge Energy. “We’re going to continue to do our absolute best to provide our customers with coarse, high quality Northern White silica sand that meets their expectations and their needs.”