: “The company has been active in the field of tank gauging since the 1970s and introduced these solutions for high accuracy land based applications in 1984,” explains Hans Westerlind, head of marketing for Emerson – Rosemount Tank Gauging.

Over the next two decades the company increased its presence within the oil business, providing industry approved gauging equipment for refineries and tank terminals: “Gradually the company became the leader in its field and in 2001 was acquired by Emerson Process Management,” Hans continues. In the years since the company has continued operating under the Rosemount Tank Gauging brand name and its solutions today boost the ability to integrate easily with existing networks, DCS or host computer systems.

Emerson – Rosemount Tank Gauging systems are applied on all types of storage tanks, both fixed roof and floating roof varieties, and its radar gauges use the drip-off antenna concept, proven to work successfully in over 100,000 installations worldwide. They can be used in conjunction with almost any liquid, from light products such as liquefied petroleum gas, liquefied natural gas and gasoline, to heavier products such as crude oils and asphalt.

“The company’s business is fairly well spread across the world. Roughly one third of its business is conducted in the Asian market, another in Europe and Africa and the other in the Americas,” highlights Hans. “Asia in particular is a rapidly growing area were the company’s presence has grown in recent years while the general climate has improved fairly rapidly in the last two years all around the globe.” 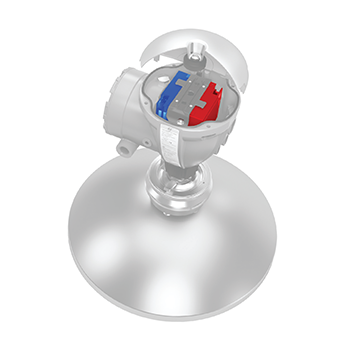 “The company most recently displayed this new generation of gauging solutions at the Stock Expo in Rotterdam in March 2011,” Hans states. “The main features of the Raptor are that it is a fully scalable system that comes complete with all-new safety features. It has SIL 2 and SIL 3 safety approval certificates and is the first high accuracy tank gauging system to gain these certifications.

“The Raptor is a new, flexible design that is equally suitable for large storage plants and smaller tank terminals, allowing the customer to optimise their supply to achieve the most cost effective solution regardless of the type of application they have. The Raptor also fulfils the growing customer demand for optimum product safety. In today’s environment customers require better functions that will assist in overfill prevention and this new generation of tank gauge comes with a unique ‘two-in-one’ functionality. This means the radar gauge in question is actually made up of two gauges in one housing. If one gauge should fail for any given reason, the second one continues the measuring process. This feature is not found in any similar product on the market today.”

The innovative features of the Raptor system do not end there, as Hans says, it is also capable of wireless functionality: “If the client wants to save even more money during installation they can take advantage of the Raptor’s wireless transmission properties. Utilising Emerson’s Smart Wireless Solutions, the client can wirelessly connect the tanks to their control room. This will require much less wiring and ground cabling, saving large amounts on installation costs.”

Since 2001 Rosemount Tank Gauging has utilised various forms of Emerson technology when developing its latest generation of systems and that synergy has been a key factor in the product gaining a high level of interest from within the oil industry: “The introduction phase for the Raptor is still underway however the company is now starting to take more orders and a small number of the systems are already up and running,” Hans reveals. “It will obviously take time to launch the system across all of the markets the company operates in, gaining regional certificates in itself is quite time consuming, but the market response seen thus far has been overwhelming.

“With this response the company is in a very good position to not only maintain its current presence in the industry, but also develop it further which is reason to be very optimistic. There are features of the Raptor that are completely new, that help put the company ahead of the competition and will allow it to increase its market participation within smaller terminals.”

As Hans enthuses, it is a combination of a strong, experienced workforce and the development of a ground-breaking product range that will allow Emerson – Rosemount Tank Gauging to progress forward over the next few years: “The company has always been known for providing quality customer service and this comes as a result of having hundreds of trained product specialists who are backed up by a comprehensive training programme. This means national and international oil company customers can get the support they need wherever they are in the world.

“To compliment the launch of the Raptor, the company also rolled out a comprehensive introductory programme, explaining the Raptor’s benefits and advertising it to current and perspective clients. So far this programme has been to around 35 different countries where it has been shown to distributors and end users. As a result of this the company has received several 100 customer enquires about the new system, a response that is truly astounding and gives Emerson – Rosemount Tank Gauging much to look forward to in the months to come.”