Encore Energy begins drilling the first of many horizontal wells in the Berea Oil Sandstone in Kentucky.

The company’s next several locations are positioned to the north in Lawrence County and offset to some of the best production in the Berea play.

The Kentucky Geological Survey has referred to the area as the best shallow oil play in the state and the Kentucky Oil and Gas Association has referred to the Berea as a “game changer.” In June, the company announced its well permit approval and began moving equipment on-site in the first week of July to begin drilling the Encore Adkins Bud #H1 horizontal Berea oil well, in Johnson County.

“We have been reviewing the Berea for the last several years and just in the last year we started making plans, deals and acquisitions in planning the horizontal well project,” Stengell explains. “We have just closed a major acquisition, which has given us access to drill off-set to the better producing wells in the play.”

Stengell previously served as the well operator for a successful horizontal Woodbine oil discovery in Texas. He holds an MBA from Western Kentucky University and has a graduate certificate in reserves and valuation from the Harold Vance Department of Petroleum Engineering at Texas A&M University.

In 2011, Stengell founded Bowling Green, Ky.-based Encore Energy after serving as president and CEO of a publicly traded E&P company. He also has experience in serving as an operator in Texas and Oklahoma.

Encore Energy previously began as a lease acquisition and brokerage company that worked with large E&P companies in the Utica Shale to acquire horizontal lease projects. In 2013, Encore Energy started acquiring leases in south-central Kentucky and drilling conventional oil wells. “Encore has drilled more than 30 vertical oil wells and is the most active well operator in south-central Kentucky,” Stengell adds. “Encore’s objective was to acquire assets and drill multiple well projects to prove-up acreage, creating a platform to bring in investment from larger E&P companies in the future.”

Attractive Opportunity
The Berea Oil Sandstone is attractive to Encore Energy because using non-conventional methods on a conventional reservoir produces higher-quality oil and better results than the shale plays. The oil play began to really gain steam about the time oil prices tanked a few years ago, Stengell says, at which time Encore began looking for lease opportunities.

“Shales are big, blanketed 200- to 300-foot reservoirs that are lower quality, thick and unpredictable,” Stengell says. “The Berea is where horizontal, non-conventional methods meet a beautiful, conventional reservoir.”

“It’s a learn-as-you-go technology,” Stengell continues. “Every single well drilled utilizes what was learned on the previous location, so you have an ever-changing and improving well technology in the Berea.” Encore is now making plans to drill in proven oil areas where the flowback period is much shorter. 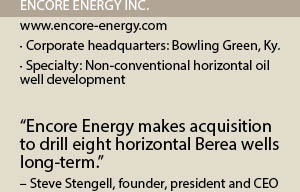 Minimizing environmental impacts is key as the company drills the horizontal well. “We understand the Bluegrass is beautiful and our non-conventional methodology is more friendly to the environment and leaves a much smaller footprint per dollar invested in the ground,” Stengell explains.

Encore Energy is a local and regional company with a focus on its environmental impact, which is much more attractive to land and mineral owners than the big oil and gas companies. “A lot of these people have controlled the major coal mines in this area for years and tell big oil they aren’t going to be pushed around and their family has been here forever,” Stengell says. “Those are the folks we deal with because they want to work with Encore because we are a local Kentucky company, grassroots and more concerned with building a relationship that’s down to earth.”

Based on Encore’s professionalism, workmanship and completion of its responsibilities and fulfillment of its obligations to land and mineral owners for its first well, the Encore Adkins Bud #H1, many mineral lease owners are seeking Encore to develop their properties. While building more relationships, Encore has been focused on optimizing the development of its horizontal well plan by utilizing all technologies available to achieve the highest level of production volumes, reserves and long-term sustain production.

“Although larger operators can utilize the 100 percent intangible drilling costs tax deduction from their drilling operations, these larger companies cannot pass on these tax benefits directly to their shareholders,” Stengell says. “At Encore, each qualified accredited director investor can deduct 100 percent of their investment against all forms of income, which results in a first year cash-out-of-pocket estimated tax savings of about 40 to 54 percent of their total investment. The combined cash flow and tax savings in year one is a critical component of Encore’s business model and return on investment to investors. The new proposed tax plan would make these deductions even more valuable to high-income investors.”

Encore Energy says Rule 506(c) has made the investment process much more transparent. “This disclaimer allows us to advertise our investment to high-net-worth, accredited investors who can involve themselves with us,” Stengell explains. “They come looking for us and it makes for a better business relationship. It ensures investors are informed about their investments and we verify they are accredited. It makes for longer-lasting relationships.”

Communication and transparency are key to maintaining investor relationships, which is why Encore Energy offers its investors an oilfield experience. “They visit the site, get a hard hat with their name on it and are put directly in the field so they can see everything that’s going on,” Stengell explains. “We let them get as close to being an operator as possible. Most of our investors visit two to three times per year when we drill. They love it and it’s all about the experience.”

Encore expects fourth-quarter 2017 to be busy because it has multiple field tours planned. “We are accepting large investments because so many high-net-worth people want to take the 100 percent tax deduction in the 2017 tax year,” Stengell says. “We are drilling multiple horizontal wells in 2017 and 2018, and investments received in 2017 will receive the 100 percent intangible drilling cost deduction for the 2017 tax year.”

In addition to field tours, Encore Energy also provides its investors with real-time information and hosts online webinars. About 80 percent of the company’s investors are repeat backers.

Continued Growth
Moving forward, Encore Energy plans to drill eight additional horizontal well locations in the Berea oil play this year and next. Although only one well is being drilled, the company is in pre-drilling operations for the remaining wells, including planning, location selection, surveying and permitting. “We intend to ramp up drilling in 2018,” Stengell adds.

“More than 20 percent of the state’s annual oil production is reported from the horizontal Berea operations of Johnson and Lawrence counties,” Stengell says. “Encore is planning to drill horizontal wells that utilize all proven technological improvements.”

Encore Energy says it will add jobs to the area, although it does not have an exact estimate yet for the total number of subcontractors it will need on-site. “It’s a rural part of the state and there is not a lot of money there, so our well will bring jobs and that’s a big deal,” Stengell says. “It will make a major economic boost to the community, so the community is very excited about the opportunity, as well. They are very engaged and want to help.”

Encore Energy will remain focused on Kentucky as it sees an unlimited amount of potential throughout the state. “We like it in Kentucky because everyone does a fabulous job,” Stengell says. “[That includes] everyone in eastern Kentucky, especially the residents want to take care of the environment and do things right.”

Disclaimer: Oil and gas investments involve a high degree of risk and are only suitable for SEC defined accredited investors who can afford the loss of their entire investment. The information herein may contain forward-looking statements and actual results may vary. No assurances can be made as it relates to production, reserves, income, timelines or any other estimates.