When other oil and gas exploration companies were retracting their operations in light of the decline in oil prices in recent years, Encore Energy Inc. continued to explore drilling opportunities and acquire drilling rights in Eastern Kentucky.

“We have skin in the game and have made major investments and sacrifices at a time when other companies were shutting their doors,” President and CEO Steve Stengell says. “This has resulted in a investment platform for our capital partners in what we believe to be one of the most prolific horizontal and non-conventional ‘tight oil’ oil and gas plays in the eastern United States.”

The Bowling Green, Ky.-based company last year began drilling its first non-conventional horizontal well, the Encore Adkins Bud #H1, in the Upper Devonian Berea Sandstone in the southern part of play in Johnson County, Ky. That well is the first of several the company intends to drill in the region. “In our last year of operating in the Berea, Encore Energy has demonstrated that it is a first-class operator,” he adds. “Many mineral owners have specifically requested that we drill, develop and produce their properties.” 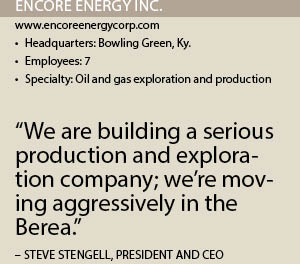 Encore Energy has recently acquired drilling rights to the JDH Estate lease, a large tract of land that was not previously leased by other major operators drilling in the most proven areas of the Berea play in Lawrence County.

“We are positioned to drill multiple horizontal wells in a half-dozen areas of Lawrence County directly offset to some of the very best proven and verified Berea production,” Stengell says. “We’re looking for institutional capital groups and sophisticated ultra-high net worth individuals as investors or to joint venture with us to develop multiple horizontal wells and prove up acreage across the entire Berea play.”

Encore Energy’s recent leases are near wells that reported the highest production rates across the entire Berea play. “We believe we have potentially 10 proposed horizontal well locations that are offset to the most proven production and/or the most recent permit and drilling activity in the play,” Stengell adds. “We are building a serious production and exploration company long-term; we’re moving aggressively in the Berea.”

Ramping Up
The company is in the process of drilling vertical top holes in preparation for its horizontal drilling operations. Encore Energy is also focused on lease verification, acquisition, title, surveying, engineering and other important and extremely expensive pre-drilling costs.

“We are de-risking the project and creating a platform for larger capital groups to invest,” Stengell says. “In the interim, we will continue drilling properties at our own pace. Each day, we are creating value.”

Stengell believes now is a good time to pursue activity in the region. “Oil prices are moving up, and with geopolitical tensions in the Middle East, you can already see activity ramping up in the Berea play and across the United States,” he adds.

The Kentucky Oil and Gas Association has referred to the Berea as a “game changer.” Stengell says he believes the region is comparable to deeper, more expensive oil and gas plays such as the Bakken and Eagle Ford shale and the Permian Basin.

“From a economic perspective, the well economics are very similar to the Eagle Ford, Permian and Bakken; however, [the Berea] allows capital groups to better diversify their investment because of lower well costs and allows them to possibly take advantage of the Rogersville shale [in Kentucky] in the future,” he adds.

The Berea is potentially productive across multiple counties in Kentucky, including Lawrence, Greeenup, Martin and Johnson counties, which represents a huge area of operations. “This could result in hundreds upon hundreds of horizontal wells that can be drilled,” Stengell says. “Even at an early stage of development, the Berea reportedly represents nearly 25 percent of the state’s total annual oil production, and the majority of this Berea oil production is located directly offset from our assets.”

Sparking a Revival
Stengell founded Encore Energy in 2011 after serving as president and CEO of a publicly traded exploration and production company. He also has experience serving as an operator in Texas and Oklahoma.

Stengell previously served as the well operator for a successful horizontal Woodbine oil discovery in Texas, which produced 58,000 barrels in the first year. He holds a degree in corporate finance from the University of Kentucky, an MBA from Western Kentucky University and has a graduate certificate in reserves and valuation from the Harold Vance Department of Petroleum Engineering at Texas A&M University.

Stengell feels Encore Energy’s activity in the Berea play will a positive and lasting impact on Kentucky as a whole. “The successful development of our leases could assist in reviving the entire Berea play and create hundreds, if not thousands, of jobs in some of the most rural areas of the state,” he adds.

For more information, contact Joseph Hooper at 270-745-0132 and visit the due diligence section of Encore Energy’s website at http://encore-energy.com/Operations.html

DISCLAIMER: Oil and gas investments involve a high degree of risk and are only suitable for SEC-defined accredited investors who can afford the loss of their entire investment. Offerings shall only be made to accredited investors through an SEC-regulated federal exemption from registration and covered security pursuant to SEC Regulation D, Rule 506(c). The information herein may contain forward-looking statements and actual results may vary. No assurances can be made as it relates to production, reserves, income, timelines or any other estimates.