Back to Profile Gallery > Enercal

Located in the south-west Pacific Ocean, around 750 miles from the east coast of Australia, New Caledonia is a French territory comprising dozens of small islands famous for their palm-lined beaches, lush rainforests, and lagoons rich with marine life. The responsibility for powering this Melanesian paradise lies with Enercal, New Caledonia’s national utility provider and the only 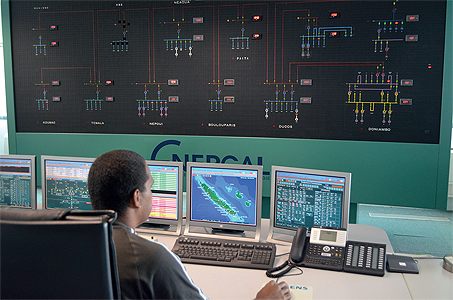 company in the territory that produces, transports, and distributes electricity.

Founded in 1955, Enercal was originally established to manage and implement the Yaté Dam project, a hydroelectric development that generates around 307 Gigawatt hours of power per year. Today, the company produces 55 per cent of the electricity consumed in New Caledonia, and 75 per cent of the renewable energy produced.

“Enercal routes electricity from production centers to the outskirts of municipalities and ensures real-time balance between production and consumption,” the company’s General Manager Jean-Gabriel Faget says. “Twenty-six out of 33 municipalities – including the area around Noumea’s La Tontouta International Airport – have chosen Enercal as the concessionaire for their electricity distribution.

“We serve 45,000 end users such as households and businesses, as well as major industrial facilities that require a huge amount of power for the transformation of nickel ore into metal. All those customers are connected to a single 150 kV transmission grid operated by Enercal and it is our job to ensure a smooth and harmonious relationship between the licensor and clients.”

A small isolated island in the heart of the Pacific, New Caledonia’s unique geography has presented Enercal with a variety of energy challenges over the years. Along with difficulty in importing raw materials, and no energy purchase possible from a close neighboring territory, Enercal is tasked with meeting the demand of New Caledonia’s electro-intensive industries, such as the three major nickel metallurgy plants that represent 75 per cent of the archipelago’s total electrical consumption.

Renewable energy
Conversely, the New Caledonian climate makes the territory a highly suitable location for the production of renewable energy, a fact that is driving Enercal’s mission to provide 100 per cent of public energy needs from renewables by 2025. Working in partnership with the government of New Caledonia, Enercal also hopes to decarbonize a significant part of the territory’s nickel industry within the next decade.

“In 2015, our government voted in the Scheme for the Energy Transition of New Caledonia (STENC) targeting 100 per cent renewable energies for public distribution (consumption of individuals and professionals except metallurgy) by 2030,” Jean-Gabriel explains. “Enercal is the linchpin of this scheme, making the energy transition possible through the adaptation of networks and system management tools that help with integrating renewable energies into the mix and delivering them to customers.

“A successful energy transition is based on controlling consumption and developing renewable energies in place of fossil fuels. Enercal is acting with its customers and the general public to encourage the control of consumption and we are also supporting the government in its multi-year investment programs to find new means of producing renewable energy and adapting the existing network so that it can facilitate this integration.

“Today,” Jean-Gabriel adds, “the energy transition is happening very quickly and the production of renewable energy can reach, or even exceed, 100 per cent at certain times of the day. Following the guidelines set out by STENC, our next step is to start selling this energy to the territory’s manufacturers of nickel metallurgy.”

For over 60 years, Enercal has developed New Caledonia’s means of producing energy, making widespread electrification possible for the territory. In the 1980s, the company commissioned the Néaoua hydroelectric power station in Houaïlou, along with a dozen micro hydraulic plants. In the decade that followed, Enercal installed New Caledonia’s first individual photovoltaic comgenerators with storage intended to supply electricity to isolated dwellings that cannot be connected to the public network.

Since 2010, Enercal has turned its attention to more renewable energy sources and in 2014 the firm established Enercal Energies Nouvelles (EEN) to further its activities in this area. A wholly-owned subsidiary of Enercal, EEN was founded with the intention of broadening Enercal’s means of production by favoring innovative missions and partnerships, studying the potential in New Caledonia for new energies and emerging technologies, and promoting energy efficiency projects. 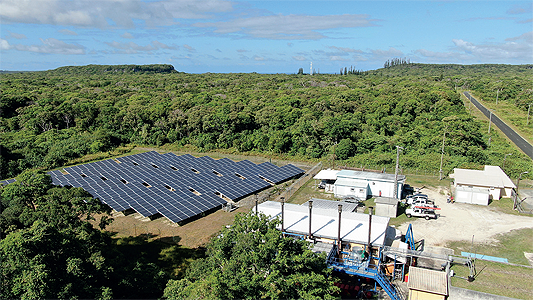 “Enercal Energies Nouvelles develops renewable energy production projects for which it alone, or in partnership, handles all elements of design, finance, construction, and delivery,” Jean-Gabriel states. “In order for projects to be part of a sustainable energy transition in the region, EEN favors innovative schemes that contribute to economic development or to the safety of our territory’s electrical system. It also prefers working with local companies and institutions to help boost New Caledonian communities.

“One of the challenges in the area of renewables comes from the growing share of intermittent energies, especially photovoltaics,” Jean-Gabriel remarks. “To combat this, Enercal Energies Nouvelles favors stable and available means of production such as hydropower, as well as storage solutions for the system. Enercal clients continue to receive direct support throughout the energy transition in the form of advice on topics such as energy saving, contract optimization, and self-consumption solutions.”

Enercal was the first company to install wind power capabilities on New Caledonia’s Isle of Pines in the 1990s, but maintenance costs in the tropical cyclone zone and low energy yield led the company to seek out more productive sources. Supported by EDF – and the global firm’s vast technical and technological expertise – Enercal and EEN have embarked on a collection of solar power projects that aim to contribute to New Caledonia’s energy mix and assist in the territory’s transition to renewable sources.

“We are pleased to say that we were responsible for the first solar power plant with storage in New Caledonia,” Jean-Gabriel comments. “It was the third-largest renewable production project in the territory and the most important of Enercal Energies Nouvelles’ work. The goal was to transform intermittent solar energy into predictable stable energy for the electricity grid.

“Alongside our attempts to revive the hydroelectric sector with a run-of-river development in the north of the territory, we have delivered New Caledonia’s first solar car park. Comprising 100 parking spaces covered with solar shades, the site is capable of producing 365 megawatt-hours of energy per annum.”

“Beyond the technical prowess on show throughout this project, the work we have done here with Enercal Energies Nouvelles will contribute to two major societal ambitions: food self-sufficiency 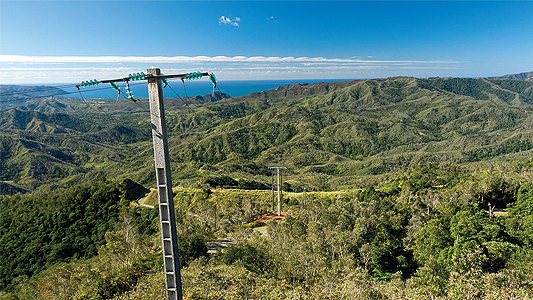 and electric self-sufficiency for New Caledonia,” said a spokesperson for Akuo on completion of the scheme.

“It’s an unprecedented achievement for the territory,” Jean-Gabriel added. “Focola is New Caledonia’s first agri-solar farm. It not only responds to issues of food and energy autonomy, but aims to boost local employment in the area. The solar shelters we have built to protect the market garden have a 1.7 megawatt-peak and will help in the production of 200 tons of vegetables a year. It’s very encouraging for the future of the energy transition.”

ISO 9001 and 14001 certified, Enercal is proud to be the only fully Caledonian company in the territory’s electrical industry and as a result, remains dedicated to the communities it serves and the local people it hires. As part of the firm’s rigorous corporate social responsibility policy, Enercal collaborates closely with higher education providers to allow Caledonians to learn new skills and obtain qualifications.

“We employ over 430 Caledonians across the territory, but the job market is narrow and it can sometimes be a challenge to recruit and retain talent,” Jean-Gabriel reports. “The energy transition requires an evolution in the professions we consider and anticipate, so our job and skills management program is designed to boost retention numbers by structuring missions and offering medium-term development prospects in the organization. Over the last four years, we have initiated more than 100 mobility files in the group. Perhaps most importantly, thanks to our partnership with the education sector, we have created a deep pool of skilled interns and apprentices who will go on to become Enercal’s professionals of tomorrow.”

In June, Enercal constructed a new customer service center in Poum, a small town in New Caledonia’s far north-west. Open each Thursday, and offering telephone consultations every day of the week, the new site will offer some of Enercal’s most remote customers easy access to regular support. The move is another step towards achieving the company’s goal of providing all Caledonians with access to quality electrical power at the best cost, fairly, securely, and with the interest of the general public at heart. A major player in the territory’s energy transition, Enercal is well-positioned to guarantee the safety and optimization of the Caledonian electric system for many years to come.

“Enercal will remain the benchmark energy company in service of the territory’s sustainable development, taking the necessary steps to make New Caledonia’s energy transition a daily reality for all that live here,” Jean-Gabriel declares. “It’s an exciting challenge that is changing our operating methods, our jobs, and our proximity to stakeholders.”