Back to Profile Gallery > Energinet.dk

“Trading since 2004, we are the transmission system operator for Denmark’s gas and electricity networks,” begins Torben Brabo, senior vice president of Energinet.dk.

Two years ago the Danish government set out in its ambitious environmental and energy policy that by 2050 it would provide a 100 per cent carbonneutral gas supply. “We are undertaking analysis of how the overall energy system and gas systems should develop so that over the next 35 years we can convert the existing mainly fossil based natural gas system to be progressively more green based.”

The state-owned business maintains a wellestablished infrastructure for transmission, and now focuses – together with the distribution companies – on intensifying the conversion of oil and coal fired consumption into gas, achieving immediate CO2 reduction, and at the same time significantly developing the production of a greater quantity of biogas. Biogas production has been in Denmark for the past 15 years, being used locally in smaller heat and power plants, but as Torben indicates: “A greater number of these projects are increasing in size and we expect up to 40-50 future biogas production sites, either connected to the distribution or transmission networks with an annual production capability of 5-15 million cubic metres per site.”

With rising imports of gas through Germany from the North European markets, Energinet. dk has recently completed a new 94-kilometre gas pipeline project in Southern Jutland, implementing further investment in the pipeline through the installation of four compression units in the main intersection of the Danish system in Egtved. The infrastructure has been 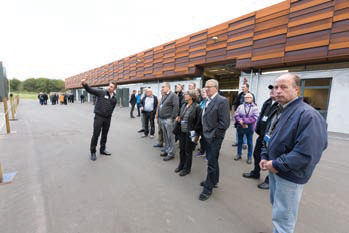 prepared so that it can pressurise gas at different levels for transit in each direction, enabling multiple usages from the investment. “We have also upgraded the SCADA and system operation tools to be able to get full value from the new import option. Historically, 100 per cent of gas in the system was supplied from the offshore fields in the Danish sector, so upgrading to two main sources is a big step,” says Torben.

Having drawn to a conclusion a very successful project, Torben mentions a few of the mishaps along the way: “In constructing the compressor station, we were keen to make it as aesthetically pleasing as possible, and as such reduced costs on installing sound reduction. However, when the four compressor units run simultaneously it produces a very high pitched, audible sound.” Concerned for its neighbours, Energinet.dk has already started upgrading the facility to eliminate the sound disturbance.

Eight years ago the business established an exchange to develop a transparent market price in the Danish and Swedish gas market. Through a partnership change, an opportunity opened to incorporate a new player with the knowledge to develop the exchange and its markets. In 2014 Energinet.dk teamed up with EEX, the German gas and power exchange and is currently focusing on development of the Danish/Swedish natural gas market and its alignment with continental European standards. “It could also open up opportunities for the distribution of some niche products, such as regional green gas products, or products based on gas from offshore fields in the North Sea,” points out Torben.

Through steady and analytical progression Energinet.dk is always aware of what challenges or opportunities lie ahead and as such takes a step-by-step approach to adaptations in infrastructure, systems, personnel or their competences. However, the business has been heavily developing the resources, shown with regard to i.e. gas quality. Following a period of heavy analysis on the co-ordination and mixture of gas quality to support free trade of gas across the borders, it was highlighted that Denmark utilises the widest range of the EU gas specification. “Essentially we allow a full combination of gases throughout our entire network, whereas other countries’ systems are geographically split using various sub-standards in the sub-systems. We conducted a review of all consumption aspects, establishing contact with all producers of appliances (household boilers as well as large turbines, etc.). The natural step has been to move forward in that direction. Complementing the move to a broader range of gases, all operatives in the supporting service sector and at the distribution companies have attended educational programmes to update their skills,” says Torben.

Energinet.dk participates and supports research projects based on electrolysis process, as part of its company strategy – working towards a future where the primary power production comes from wind and solar. “We need to be able to convert the power to an energy form that can be transported, stored and used in the wider energy sector,” adds Torben. Actively supporting two electrolysis projects, electricity from wind power and water is converted into hydrogen, which is used for upgrading biogas before it is injected into the natural gas grid. Biogas also contains CO2, and therefore it cannot be sent to the Danish gas customers through the natural gas grid. However, a new biological process, where microorganisms and hydrogen convert CO2 to methane, is upgrading the biogas. At the same time, the sister project is testing a new technology for chemical upgrading of biogas. “We test both hydrogen and methane products in our own transmission system in a 100-metre section of redundant transmission pipeline and connected M/R station. We need to test how large a percentage of hydrogen can be handled safely within the system, an area in which very few studies have been undertaken,” he explains.

Following the record setting year for Danish wind power in 2013, the business is preparing for the construction of a traditional power grid connection system, connecting new offshore wind farms to the main electricity grid. “We have several new wind farms in the area with the newest, Anholt, producing around 400MW and the next two major wind farms, signifying the sixth and seventh,” Torben highlights. A joint venture with Germany will see both nations developing wind farms in the sea between Denmark and Germany. Power connections between the wind farms and the two countries will provide both social-economic benefit as well as business opportunity. “We have just signed a co-operation agreement with the Netherlands, and another with the UK for new electricity interconnectors between the countries. We have also developed our national operating system, taking more and more renewable energy from local production sites, helping to strengthen the system,” he announces.

With the political aim of achieving the 2050 goal, Energinet.dk continues to introduce innovative thinking to the market, utilising its own assets and capabilities, as well as those from outside sources. Summarising, Torben notes: “Small steps and working in unison with our neighbours to produce regional and market based solutions are the key factors to a long-lasting greener future.”