Back to Profile Gallery > Eni Norge AS

Established in Norway in 1965 during the birth of the country’s petroleum era, Eni Norge has become a key licence partner in many of the major oil and gas fields on the Norwegian continental shelf.

As an operator in this market it maintains a policy of actively searching for new resources whilst ensuring optimum production from existing fields. The company is part of the Eni group – an Italian multinational major integrated energy company that has a presence in 77 countries and employs more than 78,000 personnel.

With the petroleum industry continuing to find new opportunities across the world, being competitive is key to remaining at the forefront. Eni Norge’s activities are built through exploration, purchase or exchange of license interests, and development of producing fields including the use of advanced recovery methods. In this respect, at the end of 2010 the company held 49 licences making it a partner in the major Norwegian North Sea oilfields.

Certainly one of the most significant single events for the company in recent years was the Norwegian Parliament’s approval of the plan for development and operation of the Goliat field in 2009. Eni Norge is both operator and license partner of the Goliat field, which is also the first oil field to be developed in the Barents Sea, in partnership with Statoil. It has two separate main reservoirs, both of which contain oil with an overlying gas cap, and is scheduled to start production during the fourth quarter of 2013.

In terms of progress with the project, Eni Norge is currently in the planning and construction phase, having awarded the majority of the development contracts to both international and Norwegian companies alike. Of particular prominence is the Sevan 1000 FPSO concept, which has been selected for use in the Goliat field. Developed by Sevan Marine, the Sevan 1000 has an oil production capacity of 100,000 barrels a day, a gas production of 3.9 million cubic metres a day, and oil storage capacity of one million barrels. The construction contract for this FPSO has been awarded to Hyundai Heavy Industries (HHI) in South Korea. 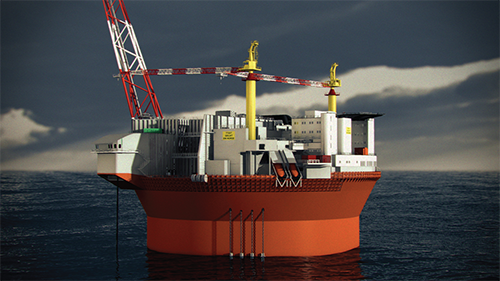 As recent major disasters have clearly indicated, the safety aspect of oil and gas operations can never be underestimated. Given this concern, strict regulations and demands were set up by the authorities in the plan for the development and production of the Goliat field. In fulfilling these stipulations, a new regulatory scheme for coastal response is being launched, on behalf of the Goliat licence. “In co-operation with the Norwegian Clean Seas Association for Operating Companies (NOFO) we are working to establish a permanent pool of fishing and other vessels as part of the oil spill contingency plans for the Goliat field,” notes Andreas Wulff, communications manager of Eni Norge. “This is a similar model to a scheme operating in Canada, and is the first time on the Norwegian market that fishing vessels can operate as part of these contingency plans. Thirty to 40 fishing vessels are now being recruited, which will be trained, equipped and modified for this purpose, with the aim of having a minimum crew of three individuals per vessel. This is a new approach to oil spill contingency and Goliat will be the first test ground for this pool on the Norwegian continental shelf.”

Complementing these activities, Eni Norge and Statoil have initiated approximately 30 research and development projects with relation to the Goliat field, designed to support the short, medium and long-term challenges and needs of this and other fields. “Many of these research projects have been conducted by Norwegian companies, and a particular example is a new form of vacuum technology. This has been developed to clean shore areas following an oil spill incident by use of a vacuum. Alongside new technology such as this, new concepts and methods of oil spill prevention have also been developed for application in the field,” highlights Andreas.

As well as the Goliat field, Eni Norge has several other ventures underway, one of which is the smaller Marulk field. Situated in block 122 of the Norwegian North Sea, this field will be developed as a tie back to the Statoil operated Norne FPSO. With a 20 per cent stake in Marulk, Eni Norge will be the field operator, which is
expected to go into production in Q2 2012.

Having spent many years as a license partner, where it has gained extensive experience, this move into the operation of producing fields is a noteworthy development for Eni Norge. Coupled with the potentially lucrative assets of the Barents Sea, Eni Norge looks set for further success in the future: “At present we have development and exploration fields where we are the operator, but not on a producing field. Naturally as one of the world’s major oil companies, oil production is at the heart of Eni. In this respect, it was a logical step for Eni Norge to move into this phase of the market. The Barents Sea is of strategic importance to Eni Norge, but also Norway as a nation, following 40 years of negotiation between Norway and Russia regarding the two countries’ ocean borderline. Following the expected ratification of the treaty from autumn 2010, we are now looking at an area of more than 85,000 km2 in the Barents Sea, which will be considered Norwegian territory and is of greater interest to oil companies looking at operating in this region,” concludes Andreas.