Environmental Protection Engineering (EPE) was founded in 1977, in Piraeus, Greece.

At first it concentrated its main activities on the protection of the marine environment, and today the business is active in all environmental protection fields alongside the marine sector. With over 30 years experience in this area, the company is an expert in marine operations, having dealt with all major spills in the Eastern Mediterranean region for the last thirty years. It operates a number of antipollution stations in Greece, Albania, Cyprus and Lebanon and plans to further expand its activities throughout the Middle East and the Arabian Peninsula.

Dr. Vassilios Mamaloukas – Frangoulis, oceanographer and director of the Marine Environment Department for EPE, explains how the company has grown to become the largest private business in the Mediterranean offering marine environmental protection services: “We always try to be one step ahead of our rivals by closely following all the latest developments in international legislation and available technologies in all fields of environmental protection. In 2001 we founded the first full service waste management company, Polyeco, and we built and operate a modern waste management and valorisation plant in Aspropyrgos. This provided us with the capability to deal with all types of hazardous and non-hazardous waste. Our broad and varied service range has won us a number of notable contracts over the years. Most recently we have been awarded a contract with the European Maritime Safety Agency (EMSA) to provide oil spill preparedness and recovery 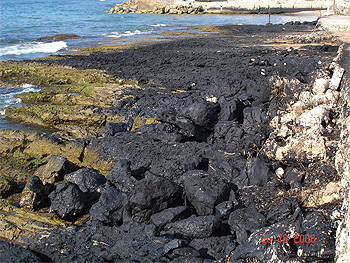 services for the Eastern Mediterranean with our M/T-OORD (Occasional Oil Recovery Duties) ‘Aktea OSRV’. As a standby oil recovery vessel, she is equipped with state of the art antipollution equipment and operated as an oil product tanker in the area. Last December ‘Aktea OSRV’ recently won the Lloyds List award for ‘Ship of the Year’.

EPE works with a variety of customers in the offshore sector. The majority are shipping companies, but it also provides its services to oil terminals of all types, including refineries. In this area, the business offers a full service range, from contingency planning to antipollution equipment installation and maintenance services, drilling, personnel training, and response to any type of oil or hazardous materials spills. This service is often provided through permanent contracts with clients.

Vassilios elaborates on these services: “The oil spill response service is our main offering – we’ve been providing this service since the company began and it’s what we are mostly known for. However we are building up a reputation in a number of other fields, which we believe will be in great demand in the future, such as ballast water treatment, and ship waste management, both of which are very important services. The company has developed its own Ballast Water Management System according to the D-2 standards of the International Convention for the Control and Management of Ships’ Ballast Water and Sediments. The unit is being tested for the type approval according to G8 guidelines to a European testing facility. We believe that our system will be commercially available from spring 2011 onwards.”

Another interesting field where EPE is active is the decontamination and rehabilitation of industrial and military sites: “We have undertaken major rehabilitation works of old industrial sites in Greece and Cyprus to allow for subsequent redevelopment,” says Vassilios “The demolition of the former Hellenic Chemical Industries in Cyprus, included the decontamination of the production processes from radioactive materials and strong acids, the treatment and final disposal of hazardous materials and the demolition of the industrial premises. We also have a manufacturing facility from which we produce equipment for ships, such as oil water separators, sewage treatment plants, and we offer cathodic protection activities.”

EPE’s oil spill service remains its most important business area, and the company carried out the response operation when the cruise vessel, the Sea Diamond, sunk near Santorini, off the coast of Greece, in 2007. Vassilios, who led the cleanup mission, elaborates on EPE’s contribution to the disaster: “It was a large scale operation – the biggest oil spill response in Greece and it had some extraordinary results. We’re very proud of having dealt so efficiently with the spill, having completely cleaned up the coastline for the people of Santorini in a very short period.

“Another notable cleanup operation came after the 2006 Israeli attack on the Lebanese power plant of Jiyyeh. As a result there was a huge spill that affected most of the length of the Lebanese coastline and our company carried out a number of operations there in response to the spill. We have cleaned most of the coastline, including the most polluted region right next to the power plant and we are now about to embark on the last contract for this spill, which will start now and conclude this large-scale operation that has lasted for over two and a half years.”

With the hope of developing the business to offer its vital services to other regions, Vassilios explains how EPE is looking to increase its staff numbers to progress the company: “I would like to see the company personnel grow – we currently have more than 300 people working for us, most of whom are highly qualified professionals. I would like to see this number increase, so that we can expand and continue to be on the cutting edge of response technology, providing high quality services for the shipping and oil industries in the future.”