Fabricom Offshore Services Ltd has come a long way in its five years of operation, first and foremost in establishing a presence in the North Sea.

Based in Aberdeen and Newcastle, Fabricom Offshore Services is a multidiscipline engineering, design and project management provider to this market. The company operates within the Fabricom Oil, Gas and Power Group, which in turn consists of various European companies as part of the larger global energy organisation.

Essentially Fabricom Offshore Services’ marketplace is in offshore brownfield engineering, and the centre of this industry in the UK is predominately Aberdeen. As such the area is hugely resource constrained, and dealing with this overspill of work has been a key driver behind Fabricom Offshore Services’ ongoing growth. The business also helps to increase oil and gas production by engineering value adding modifications to offshore facilities.

The company is particularly proud of its upcoming fifth anniversary, which serves to cement its position as a recognised company in the marketplace. “For any new business looking to operate in a very traditional market like the offshore sector, it is very difficult to break into initially. Having made our name and capabilities known over the last few years, we now have a strong track record behind us and are finding more and more opportunities arising as the business matures. A lot of potential clients are starting to approach us and we are keen to use these prospects to widen our customer portfolio,” notes Allan Cairns, managing director.

The last 22 months have been particularly notable for the business, with Fabricom Offshore Services securing several significant long-term contracts. This includes a three-year engineering services contract, with three one-year extension options, with Maersk Oil UK. “This project alone has brought 100 more people into our business, so it’s been a fantastic contract for us to win. We’ve also recently completed some work on the Juliet field for GDF SUEZ, so this has seen two new major clients brought into our portfolio. We’re also continuing to work with some of our more long-term clients such as Talisman Energy (UK) on a tieback project,” highlights Allan.

In fact Fabricom Offshore Services is seeing an increase in the number of tieback projects as part of a general market trend towards utilising older assets through subsea development. This process is far less capital intensive then larger developments such as new platforms and jackets, although these too continue to feature in the industry.

Recently, the company has signed a new long-term lease with the Quorum Business Park in Newcastle upon Tyne, signifying its continuing commitment to the North East region. 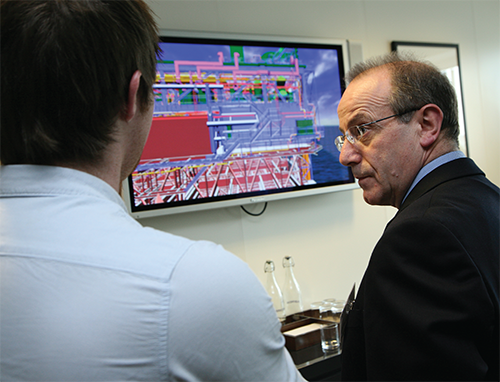 Previously, Fabricom Offshore Services had maintained a service office at the site, but the new contract is for the whole building. Crucially this offers a total capacity of 400 employees, which given that the company has exceeded all recent employment targets, is essential for its future growth. In 2010, Fabricom Offshore Services pledged to increase staffing levels from 80 up to 200 by 2012, yet it already maintains an employee base of 270 today. It is intended for this to reach over 300 staff by the end of 2012. This figure will be partially bolstered through Fabricom Offshore Services’ recent acquisition of additional office space in Aberdeen in order to be more client facing in the region.

As well as increasing employee numbers, Fabricom Offshore Services has been focused on mentoring and supporting existing staff. “At the beginning of the year we recruited a new head of human resources, and a learning and development manager, who are now helping to move the business forward right from the bottom upwards,” describes Allan. “Already we have around 35 trainees, graduates and apprentices in the business at various stages, and we are looking to increase that figure year on year, starting with 15 new individuals this September.

“We recognise that the secret of success for the business has been the quality of staff we have. An integral part of that has been retaining those experienced individuals that have a track record of excellence in the industry, as well as the development of young people through the business. Like many others, we are aware that there is a big gap in the industry and that a lot of very experienced engineers are coming up to the latter part of their careers, so we need to fill in the gulf behind them,” he adds.

This is certainly one of Fabricom Offshore Services’ greatest concerns going forward, and its investment into personnel training reflects its commitment to the offshore industry, and particularly the North Sea. Elsewhere in the business, work is also underway in order to move Fabricom Offshore Services forward with an eye to expanding its capability and market offering in order to increase the level of opportunities within the industry.