Since its founding in 2005, Falcon Oil & Gas has amassed almost 15 million acres of shale oil and gas plays with ready access to some of the world’s largest markets including Asia and Europe.

“To put it in perspective, our portfolio consists of more acreage than the entire North Dakota Bakken Shale play or the whole of the Eagle Ford play,” said CEO Robert Macaulay.

Falcon’s portfolio includes acreage in some of the world’s most attractive locations for new energy supply: Hungary, Australia, and South Africa. These assets include immense potential for both unconventional and conventional resources – giving Falcon a diverse and balanced portfolio of opportunities.

In addition to the size and potential of the acreage, the company is well positioned to access key markets. In Hungary, there is already a mature, established gas pipeline network linking the assets with the rest of Europe. In Australia, the property in the Northern Territory is linked by existing infrastructure to Darwin, where nearby industrial ports and LNG plants allow access to Asian markets.

Already, Falcon has attracted major investors, including a new joint venture with Hess in Australia. “Not only does Hess bring to the table its vast international experience in both conventional and unconventional plays, it is also a well established, trusted and successful company in Australia,” said COO Roderick Wallis.

Starting early
Falcon was able to gain this strategic position by leveraging experience with unconventional exploration in the United States and being among the first companies to apply that knowledge to the international arena. “In many ways, Falcon was a pioneer,” Wallis said.

The company was formed in Denver, Colorado at a time when unconventional drilling technology was advancing rapidly. In fact, Falcon’s core technical team includes some of the world’s top experts in unconventional assets. “A lot of people can claim to possess this knowledge today,” Macaulay says. “Falcon went one step further and one step earlier by deciding to take this technology abroad and gaining title to vast tracts of land ahead of the competition.”

With the assets and technical team in place, Falcon’s main goal over the next several years is proving the potential of its three sizeable exploration assets.

Makó Trough, Hungary
With an estimated 44 TCF potential resources, an established joint venture partner, and ready connections to a network of pipelines, Falcon is uniquely positioned to meet a hungry and dynamic European market. Wells from Falcon’s 245,000 acre production licence in the central Pannonian Basin have tested hydrocarbons from each formation. These resources are just 5km to gas processing facilities that are seeking new supply from as a result of declining oil and gas fields in the area.

Falcon’s immediate plans will focus on the shallow Algyö formation, or what Wallis calls “the ‘attic’ of what could be an enormous resource base in the deeper formations.” In the Algyö, Falcon has mapped over 35 prospects or ‘sweet spots’ each targeting between ten and 100 BCF, and has attracted the attention of Naftna Industrija Srbije (NIS) with which Falcon has announced a Joint Venture. The former Serbian national oil company is one of the largest vertically integrated oil and gas companies in Southeast Europe. The closing of the JV will start a 2012 exploration programme in which NIS will finance the drilling of three separate prospects in exchange for 50 per cent interest in the Algyö play. “In the event of a discovery, it could tie in to production through existing infrastructure in a matter of months,” Wallis highlights.

In the deeper formations where Falcon retains 100 per cent interest, the company has delineated the extent of the basin with seven wells and proved hydrocarbon potential in over 2.5km of vertical section. “Our next objective is to produce an economic flow rate from one of our existing well bores,” Wallis adds.

Beetaloo Basin, Australia
Falcon’s management gets very excited when they talk about the potential of the Beetaloo Basin. The company’s subsidiary Falcon Australia holds title to over seven million contiguous acres in four Exploration Permits. Located 600km south of Darwin in the heart of the Northern Territory, the area has ideal qualities for explorers: 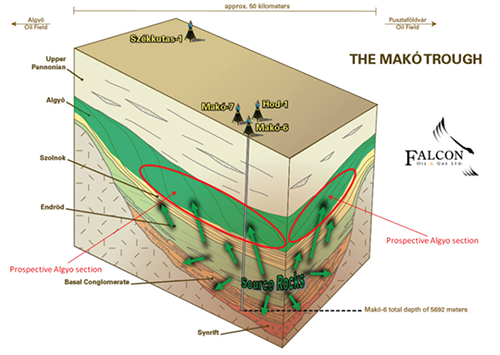 Ryder Scott estimates 18 billion barrels of oil and 64 TCF of gas from both unconventional shales and conventional structures. “We saw early on that this area had enormous potential,” explained Dr. Tom Ahlbrandt, Falcon’s prized VP of Exploration and one of the world’s leading experts on unconventional plays.

Ahlbrandt has been studying the terrain, seismic, and data from eleven wells that were drilled by an oil and gas exploration subsidiary of the mining company Rio Tinto between 1985 and 1994. According to Ahlbrandt, “At the time, Pacific Oil and Gas was looking for conventional porous and permeable sandstones. What it found was kilometers of organic rich shale, much of which it cored and described in the well reports as ‘bleeding oil’ from the cores and ‘gas bubbling madly’.” While this is a small number of wells considering the sheer size of the area, it is sufficient to identify that the Beetaloo Basin is hydrocarbon charged across a massive area.

After three years of initial exploration efforts, Falcon is ready to get to work. In July 2011, Hess committed to a Joint Venture covering two full exploration permits and a majority of the third. Hess will acquire a minimum of USD40 million of seismic data and can then elect to proceed with a series of five wells in exchange for a 62.5 per cent interest in the area. According to Wallis, Hess is the ideal partner for Falcon in the Beetaloo Basin for a number of reasons. “Hess is the leading explorer in the Bakken Shale play and will bring years of operational experience to the area. They are active in Australia with offices in Perth and have been successful with 13 of 16 exploration wells offshore Western Australia. And finally, they think the same way we do about exploration: identify and understand the petroleum systems first, drill second.”

Falcon itself will be advancing its 100 per cent work programme in the acreage surrounding the Shenandoah#1 well and in EP99, the southernmost permit in the basin. In August as this story went to print, Falcon was mobilising a rig to the Shenandoah#1 well site where it is planning to conduct five vertical tests in gas-prone zones. Regarding the upcoming Shenandoah tests, Macaulay states “Any flow of hydrocarbons to surface will support our opinion that the Beetaloo has immense productive potential. We are excited to learn about the gas zones in the middle of the basin and use this information to help steer our planning for further wells in the area.”

Karoo Basin, South Africa
The company’s work in the Karoo Basin, South Africa, provides another example of Falcon’s ability to secure competitive acreage positions in the international forum. In August 2009, Falcon was granted a Technical Cooperation Permit covering an area of 7.5 million acres in the most geographically strategic and geologically advantageous part of the basin. Within months, Shell, a Joint Venture between Statoil, Chesapeake and Sasol, and others applied for similar permits in the Karoo, each requesting large permit areas neighboring or surrounding Falcon’s permit area. Falcon has since applied for an Exploration License over its entire TCP area. Shell too has applied for three Exploration License areas totaling 90,000 square kilometers bordering Falcon’s permit to the north where it has requested a work programme to include between six and 24 wells.

The dynamics of the South African energy market make Falcon’s position very promising. Currently, South Africa depends on coal for 90 per cent of its energy needs. The state-owned power supplier Eskom, which produces 95 per cent of South Africa’s energy, started experiencing deficiency in 2007 resulting in countrywide rolling blackouts leading the government to search for diversity in energy supply.

The recent EIA report estimates of 485 TCF in the Karoo Basin have intensified interest and attention by industry participants and government officials. The landowners and people in the area have responded with widespread concern about fracture stimulation in the fragile environment of the Karoo, which as Macaulay who himself grew up in South Africa says, is “Understandable.” Further, with the exception of modest exploration efforts in the 1960s, very little onshore exploration has taken place in South Africa and there is little experience in regulating such activities. As a result, in February 2011 the government implemented a temporary moratorium on exploration activity while it examines the impacts of hydraulic fracturing and determines appropriate regulations.

Regarding the moratorium, Macaulay makes it clear that Falcon is patient. “When properly regulated, planned and executed, hydraulic fracturing is a safe and effective method of extracting natural gas which can provide an essential alternative energy source to coal for South Africa. To that end, the moratorium in effect is the right approach by the government so it can implement a world class regulatory system that addresses and governs proper operating procedures and environmental concerns.” Further, highlighting Falcon’s own history with exploration in sensitive areas, Macaulay says “As a company, Falcon is committed to implementing best practices with regard to community outreach, environmental precautions, and public disclosure. We do this not because we have to, but because it is right to do so.”

Today, Falcon is emboldened by the series of positive developments. The company is financed through the immediate work programmes on significant portions of its acreage in both Hungary and Australia. This includes work being undertaken both on the company’s own extensive acreage and by joint venture partners. These partnerships also bring more to the table than money – they bring technical expertise, scaled and efficient operations, and growth potential.

When asked about the future, Macaulay concludes, “Everything Falcon is doing today relates to building a stable base upon which the company can grow. We have the people, the financial resources, and the partnerships. The platform for this trajectory comes in the form of the three assets the company holds, each of which could on its own be a company-maker.”