Back to Profile Gallery > Fendercare Marine

This year marks the 25th anniversary of Fendercare Marine, a UK based business that has grown to become one of the world’s leading suppliers of marine services and products to clients in the shipping and marine industries, the oil, gas and renewable energy sectors, and to Navies worldwide.

In a quarter of a century the business has seen remarkable success, expanding its product and services portfolio and global footprint whilst remaining dedicated to solving the most demanding needs of its clients.

The company’s growth over its 25-year history has been considerable. It was originally known as Fender Care Ltd, a business formed in 1988 in a small, rural location in Norfolk, UK, with a core business of the sale, hire and refurbishment of Yokohama fenders. Only three years after this the business opened the first of its many global bases to help supply Middle East countries during the first Gulf War. Alongside this base the business today operates offices and stock hubs in Brazil, Australia, China, Nigeria, Angola, Ghana, India and Singapore. Expansion continued, with the business relocating to a new head office in Seething, just a few miles south of Norwich, Norfolk, where it still resides today. It entered the Ship-to-Ship (STS) market in 1995 working in operations involving transfers of various liquid cargoes between vessels of any size for Shell and many other oil majors.

This was an important step in the it’s history as it is now the world’s leading provider of STS transfer services. In 2012 alone the company transferred more than 475 million barrels of oil during nearly 3000 individual operations around the world from over 40 STS bases. Since 1995 the company’s STS record has been exemplary, with a safety record of zero environmental incidents in all operations.

In 2005 Fendercare Marine reached a key milestone in its history, when it became a member of James Fisher and Sons Plc, which is a leading service provider in the major sectors of the marine industry and a specialist provider of engineering services to the nuclear industry. During the 2000s the company has continued to expand by acquiring various businesses in its key operating areas, thus expanding its product and service portfolio as well as its customer base. Several companies which have joined the Group included E.J Bean, Turners Marine Trading, Hippo Marine and Strainstall Marine in 2012, which further extended Fendercare Marine’s reach into the offshore oil and gas sectors. 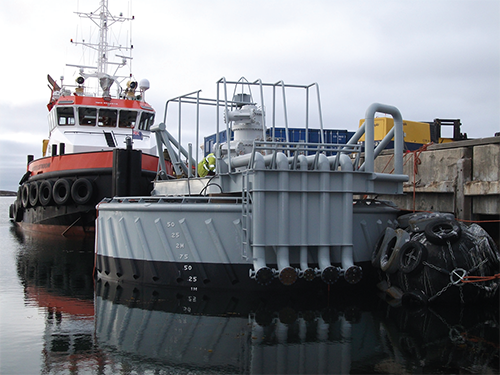 Instrumental to the continued success of Fendercare Marine has been the strong leadership throughout its management team, including managing director Eric Plane, who has been with the business since 1995. “Fendercare Marine is a company that operates in a wide variety of sectors within the marine industry and the supply of marine equipment to worldwide Navies,” he explains.

“One of the main reasons for our success and growth over these 25 years has been our focus on solving our customers’ problems. Our clients are hugely important to us and we genuinely go the extra mile for them, whether that is for transferring oil between ships or supplying a cyclone mooring to a contractor in a hostile part of the world. We work extremely closely with all our larger customers because the business relationship that we have is one based on longevity and quality of service. These customers typically include all the oil majors, most of the world’s indigenous oil companies, most of the major Navies of the world and most large marine contractors.”

As the offshore industry has grown so too the business has developed alongside it, often adopting an “if we don’t supply it now, we will soon” attitude. “Fendercare Marine has traditionally been a company of two distinct arms,” says Eric. “One arm supplies products all around the world whilst the other almost exclusively provides our customers with the ability to transfer oil between ships at sea.

“Using our marine knowledge and the experience we have gained we have recently started to provide our clients with a much wider range of services, SBM refurbishments, FPSO pilotage and support services, marine terminal hose change out services, subsea services such as air diving and ROV services, and stress monitoring for all sorts of offshore and subsea structures. The next stage in our evolution is to broaden our appeal to the upstream offshore oil and gas sector, and to that end we are launching lifting and testing equipment services and rentals. This is a mature business but our USP will be that we will offer these services not only from established commercial centres such as Singapore, but also in places such as Angola, Ghana, Malaysia and other remote locations where the established players have no presence.”

Angola in particular has been the site of one of Fendercare Marine’s most ambitious projects to date, when in 2012 the business took responsibility for providing marine terminal support services for two oil fields in the country as part of a £200 million contract to provide turnkey marine terminal management services. This particular project marks a considerable development for the company’s marine services business by demonstrating that it has the scale, technology, expertise and global reach to manage such complex global projects effectively.

This spirit of continuous development has been a constant throughout Fendercare Marine’s history, and looking ahead Eric is certain that it will continue. “Despite our recent expansion we believe that we are only scratching the surface of our potential capability and we see that the expansion of the offshore oil and gas industry in more remote locations will provide companies such as ourselves with a strong level of opportunity for the foreseeable future.

“Our focus for 2013 is to ensure that we have the right offering and the right infrastructure in places throughout the world where our customers are asking us to be, currently that is Brazil, India, Middle East, Singapore, Angola, East Africa and Australia. Our overall ambition is to be able to take what started as a tiny company founded 25 years ago in a back bedroom and turn it into a truly global marine services provider without losing our roots, our ethos and our passion for business,” he concludes.