Back to Profile Gallery > Fertoing Ltd

Founded in March 2003 as the engineering survey department of the GT Morstroy Group of Companies, Fertoing Ltd has enjoyed rapid growth since its inception as a small engineering department to the major supplier of engineering, navigational, subsea and hydrographic services it is today.

“We started as a small group of young engineers but have expanded through responding to the major suppliers and players in the Russian oil and gas market. Back then we had undisputed leaders in engineering working for us, but following a complicated process of development we now have a much better team with more experienced professionals,” says Ilya Logvinov, development director at Fertoing Ltd.

“The team we have gives us a competitive edge in the market; we are young, with an average of 34 years, and a lot of our investment goes into our personnel to boost their experience and offer more opportunities to them to get involved in new and interesting projects. Some companies invest a lot in equipment but may not see a return on the investment in time; however if you invest in your personnel you will see quick, positive results.”

Covering the entire territory of the Russian Federation, Fertoing performs a large scope of work in the field of integrated offshore survey, navigational, geotechnical and subsea support to the construction and operation of subsea, pipeline, river and marine transport facilities. “Our main areas of operation are in engineering, hydrographic and ROV for both shallow water and offshore projects,” Ilya highlights. “These services can be very complicated as we support our customers from blueprint phase to construction, and during operation and maintenance of the facilities. Offshore we use up-to-date hydrographic and navigation equipment, and a comprehensive range of ROVs, from observation class ROVs to large, hydraulic work-class vehicles.”

Having worked on 1105 projects in Russia since 2003, the company began performing complex hydrographic works to survey the operating base of floating drill facility Obsky-1 in the Gulf of Ob in 2007. This was a pioneering project for Fertoing, not only proving its abilities as an engineering service supplier in the development of offshore Russia, but also enabling the firm to dominate the hydrographic services market. In 2008 the company fully commenced operations at pipeline transportation facilities, delivering integrated navigational and hydrographic support for the installation of four underwater pipelines in the Bovanenkovo-Ukhta gas pipeline system in the Kara Sea. 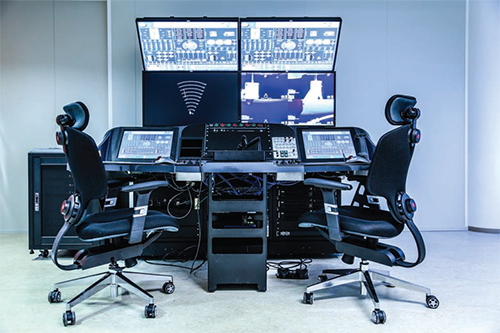 Today, headquartered in St Petersburg, with representative offices in Yuzhno-Sakhalinsk, Sochi and Murmansk, the company has completed more than 200 engineering projects for the Russian Federation in 2013 alone. “We are the first company to be involved in the hydrographic and full ROV support during the construction of the first Russian subsea production system, the Kirinskoye gas and condensate field in the Sakhalin Region,” says Ilya. “This is a big project for us as a Russian company and also a big step for the Russian Federation too as before we took over these operations all offshore work was completed by foreign companies. Despite the complexity of the engineering works, their exceptional challenges and adverse weather conditions, Fertoing successfully completed the work.”

Commencing work within the Sakhalin- Khabarovsk-Vladistok main gas pipeline project in 2009, the company began providing integrated engineering support to the construction of the Kirinskoye gas and condensate field in 2012. Located in the Sea of Okhotsk, 28 kilometres from the shore, the Kirinskoye field is viewed as the top development priority within the Sakhalin III project; the field’s development will contribute to favourable gasification conditions in the Russian Far East and the delivery of natural gas and condensate to the global market.

For the first time in Russian history a subsea production facility was installed in 2013, with an official ceremony held in October for the first gas production and its transmission testing at the onshore processing facility (OPF) of the Kirinskoye gas and condensate field. A major event for Russia, the command to launch gas production came from Russian president Vladimir Putin.

Fertoing is keen to further enhance the skills of its highly efficient and innovative team and enhance its services by investing in new equipment. “Our offshore work covers the majority of the year, from April to November, so there is a short period where we could try and find jobs elsewhere in the world. However we aren’t focused on making as much money as possible, our focus is on experience, so we choose to sit down and go over the work we have done, while also providing maintenance of equipment and training for personnel,” says Ilya.

“We recently constructed a new 500 square metre training facility for our personnel with VMAX Full-up XLX Console Simulation Package that is a complete replica of the work-class ROV, and practical class with navigational and hydrographic equipment imitating bridge of pipelaying barge, multi-support vessel or drilling rig.

“We want to improve the quality of operations and find additional areas of the business to implement our vocation expertise,” says Ilya. Furthermore, by constantly following the latest scientific and technological trends to improve and modernise equipment stock, Fertoing’s strong equipment capability enables it to dominate in services for the Russian Federation as well as engineering services for the world market.

Realising the company’s major role in the Russian marine engineering development, Fertoing actively participates in non-commercial social projects. One of them is the KronstadtNaval Museum, established in May 2012 by the united efforts of the enthusiasts and company full financial support. “The main objectives of the Museum are presenting the diving history of Russia, history of Kronstadt and promotion of vocations of a diver and marine engineer for all ages visitors,” says Ilya. The Museum houses a wide collection of diving equipment, which is all still operational. A special room is devoted to the heroic defense of Kronstadt and the defenders’ life during the Great War.

Fertoing looks set to flourish in the future as it continues to strategically enhance its service offering to earn a larger market share within the Russian offshore industry. “We want to continue the cycle of offering personnel training so we can take on more opportunities and interesting projects, which will thus lead to our continued growth and development. Wewould also like to see more Russian companies and engineers in the Russian offshore market, which is why we offer training to students who come in and practice during the summer time. If our personnel are interested in their job they will be more enthusiastic about finding interesting and unique solutions. This makes for great morale and a positive work atmosphere, and as a result, company stability and self-confidence,” Ilya concludes.