Back to Profile Gallery > Fire Protection Engineering AS

Fire Protection Engineering (FPE) was founded in April 2000 by a team of individuals with a long-standing history in the supply of fire protection systems for the oil and gas industry.

It was initially taken over by the Norwegian company Bjorge ASA in May 2007, and in January 2011 Bjorge ASA was divided and de-merged from Oslo stock exchange. FPE is today the daughter of the new company Align AS and through the acquisition of Sontum Fire and Safety, FPE’s position as a full-range supplier to new buildings, maintenance and modification (MMO), as well as the aftermarket has been significantly strengthened. Main owner of Align group and Fire Protection Engineering AS is the Norwegian private equity investor Hitec Vision.

The core competence of the business is established in engineering and the majority of its engineers and designers entered the industry between the late 1970’s and early 1990’s promoting a wealth of more than 30 years experience across the business. The crew of assembly fitters and service technicians also has extensive experience with assembling and servicing a range of fire fighting equipment, with several of the technicians awarded with multidiscipline qualifications.

The service department undertakes a large variety of tasks, such as installation, commissioning, trouble-shooting and repair, turnkey replacement and upgrading projects. FPE’s personnel have been involved as project managers and engineers in supplying fire protection systems and equipment to most of the platforms operating in the Norwegian sector of the North Sea, but also for projects in the UK, Singapore, Korea, China, Canada, Azerbaijan, Australia and Russia.

Speaking with European Oil and Gas Magazine, Svein Roar Sivertsen, sales and marketing director, focuses on business development: “The market today is still growing, but we foresee it flattening out towards the end of 2014 and into 2015. The future from 2016 and onwards depends on the willingness for the operators to invest and develop their discoveries.” 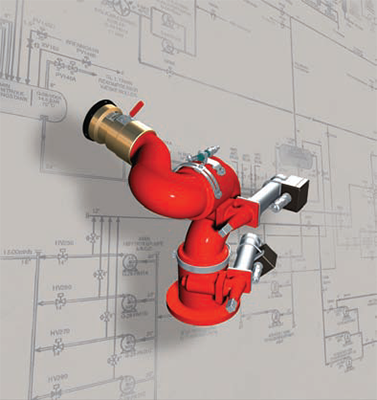 FPE has recently been awarded the framework agreement for Statoil’s Mariner & Bressey field in the UKCS. The major contract has a value of over 100 MNOK. Additionally the business was awarded the contract on the Aasta Hansteen project, the world largest SPAR platform with a value of over 50 MNOK, and Shell Norway’s onshore gas treatment plant, Nyhamna (Ormenlange), where FPE is delivering engineered fire fighting system solutions.

Following the business expansion and the establishment of an office in Houston, the company’s market share in the US and surrounding regions has improved, as Svein says: “Optimism is high as work in the area has increased. Since the opening of the office we have been awarded several contracts, and it is important for us that we are closer to the decision makers as well.” By ultimately being closer to the engineering companies FPE is in a strategically better position to follow-up each lead created out of the Houston office.

With order books comfortable for 2014, Svein addresses the future plans of the company in the oil and gas industry: “We have the aim of developing through organic growth. We view it as the most important aspect of development that is ongoing in the areas in which we already hold a strong position.”

Previously, the business was looking into development utilising the relationships with its sister companies within the group. Svein reviews the progress on this vision: “The daughter companies of Align AS have now established a concept called “LEGO”. Essentially this is a product and technology provider of safety and production critical solutions. i.e. FEED, concept and detail engineering for green and brownfield projects with globally recognised quality brands.”

Ensuring the quality, FPE AS has designed and constructed a state-of-the-art test facility, with a large capacity and high flexibility. From this facility, all water-based fire fighting equipment, such as deluge, sprinkler, monitor, hydrant and hose reel systems may be performance tested, at full capacity. The main business objective is to contribute to the protection of personnel and production facilities, by guaranteeing that extinguishing systems operate safely at all times.

In recognition of the importance in growing talent for the future of the industry the company has been working towards attracting new personnel with the right aptitude. “We have had success where we invite young graduate students for a session at our premises based on a speed date concept where we address the opportunities and possibilities of joining FPE. We have a good mix of junior and senior engineers where the young people are learning from the more experienced employees. We offer internal education and training with new topics each time and provide many possibilities for a strong and rewarding career,” explains Svein. Extending its training, FPE additionally promotes its academy, from which it runs a series of tailored seminars for customers, with topics at their request.

Moving into the future, the business recognises the financial goals that it aims to achieve, but what is fundamentally of importance is the vision of becoming the preferred supplier of engineered fire fighting systems for the global oil and gas industry.