Growing all over Europe

You may not think that a period of two years is too long for a great number of significant developments to take place in a company’s activities, but looking at the major projects Fluxys has been involved with in the last 24 months may well change your mind. Without a doubt, the independent gas infrastructure group headquartered in Belgium, whose subsidiary Fluxys Belgium is the independent operator of both the natural gas transmission and the storage infrastructure in Belgium as well as the Zeebrugge liquefied natural gas (LNG) terminal, has got its fingers in many pies, as it strives to strengthen its position across the entire European continent, with regards particularly to the use of LNG.

Nowadays, this type of fuel is considered to be an ideal alternative fuel for ships, long-haul trucks, and industrial companies located in areas where there are no nearby gas lines. With energy 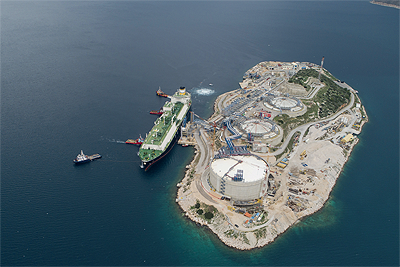 transition in place, the demand for LNG is growing; LNG is an environmentally-friendly fuel compared to traditional fuels, as a shift away from those fuels (ie: diesel for trucks and HFO for ships) has an immediate positive impact on both climate (less GHG emitted) and health (much less pollutants like NOx, SOx & PM emitted). This propelled the commissioning of a second LNG truck loading station at the Fluxysoperated Zeebrugge terminal in early 2019. As a result, a 67 per cent increase of trucks being loaded so far this year was registered at the end of September, compared to the figures at the same time in 2018.

“May, July, and September were alltime record months, with no fewer than, respectively, 194, 233, and 238 trucks loading LNG at the facility,” notes Laurent Remy, Fluxys’ spokesperson. “2019 is also proving to be the most successful in Zeebrugge’s history, in terms of ships docking at the terminal. By September, a total of 85 LNG ships had docked, breaking the previous annual record of 82 vessels dating from a decade earlier.”

Gateway to Europe
In a major contract win in the same month, the facility had all of its unloading slots booked by Qatar Terminal Limited until 2039 (with the possibility of extension until 2044). Pascal De Buck, CEO of Fluxys, comments: “The agreement contributes massively to securing the long-term future of the terminal and further strengthens its position as a versatile LNG gateway into Europe. Not only does it provide ample pipeline takeaway capacity for delivery throughout north-western Europe, but also a wide range of options for downstream smallscale LNG distribution.”

It was shortly after we last caught up with Fluxys (in February 2018) that the operator took over the concession in the port of Antwerp at quay 526-528 to make LNG available as an alternative fuel for ships and barges. “We have already enabled barges and smaller seagoing ships to bunker LNG smoothly and flexibly 24/7, using LNG tanker trucks in a procedure known as truck-toship bunkering,” Laurent points out. “We are also currently constructing the infrastructure needed for these vessels to fill up with LNG at a permanent facility with LNG storage.

“In February this year, Fluxys and Titan LNG joined forces to build the FlexFueler 002 – a bunkering pontoon with a maximum capacity of 1480 m³, to make LNG more widely available as shipping fuel in the Antwerp region and port. The pontoon will provide bunkering services to inland waterway vessels and small coasters, in addition to the current truck-to-ship bunkering option, and will be commissioned by Q4 2020. As regulations for sulphur content in shipping fuel have become stricter and will tighten even more in 2020, switching to LNG is an excellent alternative, because it cuts down sulphur emissions and particulates to negligible levels,” he explains.

Greek potential
Moving away from its domestic market, Fluxys has also pursued business interests in France, Germany, and Greece in the last few months. Starting chronologically, the summer of 2018 saw Senfluga – a consortium consisting of Snam, Enagás, and Fluxys – acquire a 66 per cent stake in DEFSA (prior to reselling ten per cent to a Greek investor in Aug 2019) – Greece’s natural gas transmission system operator, together with an LNG regasification terminal at Revithoussa.

Laurent details: “From the very beginning, we were eager to gain a foothold in southeastern Europe, with a view of being part of the new supply corridors into the continent. Together with our partners, we are willing to boost the development of the Greek gas infrastructure system in the coming years, fully realising the potential of Greece as a gas hub. This will not only foster the development of the domestic market, making energy affordable, reliable, and sustainable for local end users, but will also facilitate other transit initiatives that will unlock new sources of gas for Europe.”

Sound prospects
With an annual regasification capacity of 13 billion m³ of natural gas and a storage capacity of 600,000 m³ LNG, the Dunkirk LNG terminal is one of Europe’s largest and can meet 20 per cent of France and Belgium’s gas demand. As such, and due to its direct connection with the Belgian network, it has understandably been on Fluxys’ radar for a long time (Fluxys held from the onset a 25 per cent stake). In October 2018, the Belgian operator and its consortium partners – AXA IM and Crédit Agricole Assurances – completed the acquisition of a 35.76 per cent stake in Dunkerque 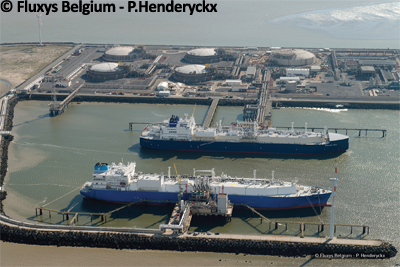 LNG from EDF and Total.

“We are now the reference shareholder and hold a 30.39 per cent stake in the capital of the terminal and we believe that it holds sound prospects for future growth, as we aspire to develop inter alia its small-scale LNG potential,” Laurent reveals. “Under the new framework, a fast reloading service for LNG carriers is already provided to Dunkerque LNG customers, which significantly reduces the time of a call during a reloading operation. Additionally, a truck loading bay with a capacity of 3000 operations will shortly be commissioned, while the existing jetty is currently being adapted, in order for the terminal to accommodate smaller vessels, such as LNG bunkering vessels. Once the adaptation work is completed, the applicable minimum vessel size will be lowered to 5000 m³, instead of the current 65,000 m³,” he elaborates.

A cleaner future
What Laurent sees as a significant milestone for Fluxys, is the company’s involvement in the construction of a mid-scale LNG storage terminal in the Port of Rostock, as this is the first time the company is building an infrastructure outside Belgium, partnering with a major LNG producer. “We set up the joint venture Rostock LNG GmbH with Novatek with the idea to build and operate a terminal for receiving and unloading mid-scale LNG carriers from Novatek’s liquefaction facility in the port of Vysotsk, near Saint Petersburg, keeping LNG in storage, and providing services to enable downstream distribution of LNG. The facility is envisaged to unlock LNG as a lowemission alternative for heavy fuel oil and marine diesel oil in the western Baltic Sea, which is characterised by a very busy ship traffic, and to offer some additional supply to Central and Eastern Europe for extra mobility,” he discusses.

With the Land Lease agreement signed in mid-October 2018, Rostock KNG GmbH is currently proceeding with the engineering and permitting processes. As Laurent clarifies: “Front End Engineering Design (FEED) has been completed, an Engineering, Procurement, and Construction (EPC) tendering has been launched, and a Final Investment Decision (FID) is expected by mid-2020.”

The projects Fluxys is working on, unequivocally demonstrate the operator’s determination to ensure a cleaner future for Europe, as the continent embraces LNG as a viable alternative fuel. Given the growing role of this type of gas and the infrastructure developments of which the company is part, there is every reason to believe that there will be plenty of other opportunities in the future to report on Fluxys’ growth as one of the leading European ambassadors of the use of LNG.