Back to Profile Gallery > Fluxys SA

A vital name in Belgium’s energy market, Fluxys SA is the independent operator of both the country’s natural gas transmission grid and storage infrastructure.

It also maintains a third business line in the operations of the Zeebrugge liquefied natural gas (LNG) terminal. Through these activities, Fluxys has developed its infrastructure into a veritable crossroads for international gas flows in Western Europe.

The grid itself is one of the best-interconnected gas infrastructures within the region, with 18 interconnection points, which opens up Belgium to natural gas flows from the UK, Norway, the Netherlands, Russia, and other LNG producing countries. The Fluxys grid also serves to facilitate transmission flows of natural gas to markets such as the Netherlands, Germany, Luxembourg, France, the UK, and parts of southern Europe.

Responsibility for both domestic transmission from the border to power stations, major industrial end users and distribution system operators, and border-to-border transmission for distribution elsewhere in Europe falls to Fluxys in its role as operator. In order to achieve this, the company maintains a network of more than 4000 kilometres of pipelines. Every year, Fluxys transports approximately 19 billion cubic metres of natural gas for consumption in Belgium.

Naturally there is a logical interaction between Fluxys’ various business divisions, with the company’s storage services helping to balance the difference between natural gas consumption between seasons. This has been carried out at Fluxys’ underground storage facility at Loenhout for over twenty years, which has a capacity of 700 million cubic metres. The gas is trapped naturally by a dome-shaped cap rock that is impermeable to either gas or water, and located above the water-containing reservoir rock. As the facility is filled throughout the summer the natural gas forces the water down, and then in the winter as gas is drawn off the water pressure pushes the gas back up.

Completing this portfolio is the Zeebrugge terminal, which provides facilities for the loading and unloading of vessels carrying LNG. This is then temporarily stored in tanks at the terminal before either being regasified and injected into the grid for consumption on the Belgian market, or re-loaded into other carriers for transportation for onwards transmission to other consumer markets.

Over the space of 30 years, Fluxys has developed Zeebrugge into not only the heart of its own grid system, but also the wider western European gas network through its position on two major axes in this gas flow – the east/west axis from Russia to the UK, and the north/south axis from Norway to southern Europe. Zeebrugge also plays a key commercial role within the natural gas trade with the Zeebrugge Hub recognised as one of Europe’s leading international natural gas spot markets. 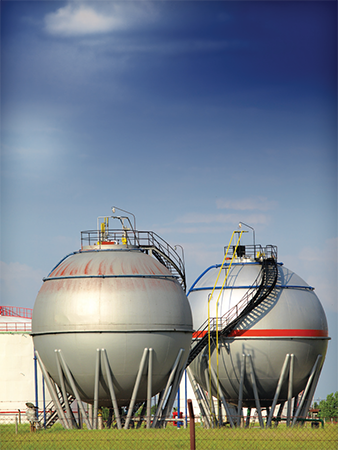 In addition, the site is home to specific infrastructure that is connected to various European assets. This includes the Interconnector terminal, which joins Fluxys’ network to the underwater Interconnector pipeline running to Bacton in the UK. It also enables natural gas from the continent to be shipped the other way. In a similar vein, Gassco’s Zeepipe terminal connects Norway’s Troll and Sleipner gas fields to the Fluxys grid via the underwater Zeepipe pipeline.

Since the facility was commissioned in 1987 around 1200 LNG carriers have docked at the terminal. In this time it has only undergone one capacity enhancement, which saw a fourth storage tank and additional send-put capacity installed between 2004 and 2008. This has doubled Zeebrugge’s throughput capacity to nine billion cubic metres per year and the reception of 110 ships per year as opposed to the 66 previously. Considering the rising importance of LNG in Europe’s ongoing security of energy supply, since 2007 Fluxys has been assessing demand for a further addition to capacity at the terminal. This has since gained ground with the launch of the binding phase of market consultation earlier this year.

Another key development underway is the implementation of Fluxys’ new ten-year indicative investment programme. The scope of this agenda amounts to just over 2 billion euros between 2010 and 2019, although the bulk of this is allocated to the period 2010 to 2015 alone. Key elements include maintaining the security, integrity and reliability of the infrastructure and strengthening the role of the Fluxys grid as a crossroads for international gas flows in western Europe by creating additional border-to-border capacity in agreement with grid users. It is here that Fluxys’ role within the European Pipeline Research Group (EPRG) may be of particular benefit, with much of the organisation’s work incorporated in national and international standards for pipeline design, construction and operation.

Fluxys also has plans to open up the grid to as many sources as possible to ensure maximum diversity and therefore contribute to future security of supply. Equally, in response to expected growth in demand, the company is looking to create new transmission capacity. Whilst most of the investment seems concentrated on Fluxys’ transmission activities, it is also looking to increase capacity and availability at Loenhout, and the possibility of a move towards a virtual marketplace within Belgium via a uniform entry and exit model.

Perhaps crucially, the programme has been specifically designed with enough built-in flexibility to be able to react rapidly to changes in the market, and therefore avoid unnecessary investment. With the world energy market somewhat uncertain at present, and fluctuations in value of resources, Fluxys’ ability to adapt and take into account changing needs is vital in ensuring the long-term sustainability of supply across its network.