Connected to the market

As the independent operator of both the natural gas transmission grid as well as storage and LNG infrastructure in Belgium, Fluxys has developed its assets into a veritable crossroads for international gas flows in north-western Europe.

This includes 18 interconnection points throughout the grid, opening up the network to gas flows from the UK, Norway, the Netherlands, Russia, and all liquefied natural gas (LNG) producing countries. The system also acts as a crossroads for transmission flows of natural gas into many of these markets including France, Luxembourg, Germany, the Netherlands, UK, and southern Europe.

In total, Fluxys’ network consists of more than 4100 kilometres of pipeline for both the transmission of natural gas for use in Belgium, and border-to-border movement for transmission to other end user markets. Within Belgium itself, Fluxys transports around 19 billion cubic metres of natural gas each year for local consumption, connecting into 17 distribution system operators, which in turn are responsible for distributing natural gas to homes and SMEs. In addition, around 250 industrial end users and power stations are directly connected to the Fluxys grid in Belgium.

At the heart of this offering is Fluxys’ Zeebrugge LNG terminal, which acts as a gateway for the supply of LNG into northwest Europe. Commissioned in 1987, the facility supports the loading and 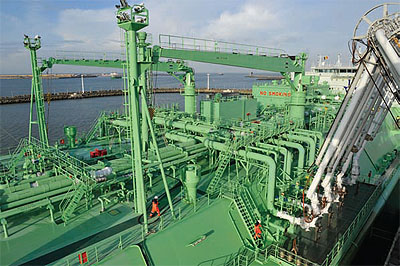 unloading of ships carrying LNG, which once unloaded can temporarily be stored in tanks on site and then regasified and injected into the grid for transmission, or loaded back onto LNG ships for onwards delivery.

Having already implemented one capacity enhancement at Zeebrugge since its foundation, Fluxys is currently planning to extend the existing terminal in two separate phases. “The first was to build a second jetty to receive LNG ships, and the second was to build an additional storage tank,” reveals Rudy Van Beurden, press at Fluxys. “In the meantime we have taken the decision to invest in the second jetty, and as of today the substructure is almost ready so we expect to be receiving cargo by the end of 2014. The new development will allow us greater flexibility in receiving LNG vessels from 2000 cubic metres up to Q-Max sizes.

“With the change in regulations with regards to maritime transportation on the sea and near harbours for low emissions, we see LNG as the perfect substitute for the heavy fuels currently used in these vessels. It has significantly lower carbon emissions and virtually no sulphur emissions compared to heavy fuel oil and diesel, we believe that there is an opportunity to develop a market for LNG as a fuel for vessels and long-haul road transport by truck,” he enthuses.

As of the 1st October 2012, Fluxys will introduce a completely new entry access system with a new virtual market, which will be used to balance the grid and boost liquidity. Whilst it is too soon to judge the results of this enterprise, the scheme, which is known as the Zeebrugge Trading Point, has been set up as a virtual point to cover the whole Belgian market and therefore is expected to attract new players into the region.

In order to intensify its role as a crossroads in Europe for gas transportation, Fluxys Belgium has invested approximately 1.2 billion Euros between 2007 and 2011, and plans to reach a similar figure for Belgium going forward to 2021. “Fluxys is active in Belgium and has expanded over the last few years into Europe as well, with around 1.5 billion Euros of investment into acquisitions and greenfield projects. This includes a participation in a new LNG terminal in Dunkirk and NEL pipeline in the north of Germany where Fluxys is a partner, and the acquisition of ENI’s stakes in the TENP pipeline in Germany, and Transitgas pipeline in Switzerland. At the same time the company is to increase its stake in the Interconnector pipeline, which it already directly owned 15 per cent in, through a joint venture with SNAM.

Although not yet earmarked, Fluxys is intending to spend around another 1 billion Euros on future projects in its ambition to increase gas transmission connections around Europe. “Our aim is to develop a tentacular cross-border infrastructure connecting from the UK, through Belgium, Germany, and Switzerland into Italy creating a north-south axis. At the same time this will serve to reinforce our east-west network between the UK and Germany, which will attract additional flows towards our infrastructure and enhance security of supply through connections to more sources.

“As part of this, our goal is to make the entire network bi-directional, which means that we can reverse flows. If there is oversupply into certain regions in the future, such as from the Caspian region and Russia into Italy, we can bring that gas onwards to the north-western European market. This will benefit the industry as a whole by increasing competition and creating a liquid market in Europe,” highlights Rudy.

An important consideration in such developments is Fluxys’ completely independent nature as an operator. This gives it an advantage in working in the market, in a way that does not discriminate, with a complete focus on the customer. However, as with all businesses there are challenges that Fluxys sees as warranting attention for the future – many of which have an impact on a much wider scale: “In Belgium there is currently no incentive to use natural gas as fuel in a power plant, partly due to the low carbon price, which means we still see competition from coal-fired power plants which are often located in surrounding countries. However, with the costs of transporting power between ten and 20 times higher than transporting gas, local production of power is far more effective from a purely economic view. Likewise, natural gas offers various environmental advantages over coal, and is a strong complement to emerging renewable energies,” describes Rudy.

Although it is apparent that the role of gas is not yet fully defined, Fluxys remains confident in the opportunities for this kind of energy going forward, particularly as pressures on supply continue to grow: “Whilst we definitely believe there is a future for gas, in terms of visualising exactly how this will look in the next few years there is some uncertainty. We are trying to take advantage of these opportunities in a prudent and safe way, by targeting investments that are reasonably priced and where we can manage the risk profile. We work in a competitive environment, as compared to other Transmission System Operator’s (TSO) we do not have a large captive market and more than 60 per cent of our revenues are coming from cross-border transportation, where there is competition from other operators. Therefore it is vital that we can offer LNG and transportation services at a competitive price, and continue to work towards keeping our tariffs at a low level, compared to other operators, in order to improve our market standing,” concludes Rudy.