Back to Profile Gallery > Forsyths

Operating out of its two facilities in Buckie and Rothes, Forsyths weathered the challenges brought about by the global economic downturn and today remains a trusted supplier of steelwork and piping solutions to the beverage and oil and gas industries.

Since it was last featured in European Oil and Gas Magazine the company has continued to grow, spurred by an increasingly buoyant oil and gas market and continued repeat contracts within the alcoholic beverages sector.

Carrying on the momentum it has gained in recent years the firm is currently keenly interested in expanding its operations in Buckie to enable it to remain in a prime position to co-operate with the areas expanding renewable and offshore industries. Furthermore over the past three years Forsyths has invested £5 million in its facilities, primarily in its Rothes site and is looking to continue to expand in a similar vein throughout the rest of 2013 and into 2014. During 2009 the company undertook a significant project for Statoil for the fabrication and assembly of a 320 tonne MEG re-generation skid unit. This was constructed at the company’s own quayside facility in Buckie and shipped to Statoil in Norway. Subsequently Forsyths has been the recipient of a number of accolades from Statoil.

At present the company is involved in the largest contract it has ever undertaken, supplying Petrofac and Cameron on the Laggan Tormore field. Now in double figures, the project started some 18 months ago and is currently near its conclusion, with Forsyths’ involvement set to end around the end of 2013. However, the firm recently won an important project with BP to fabricate equipment for the Quad 204 project on the Schiehallion field. “We are very active with the BP Quad 204 project,” begins Richard Forsyth, chairman. “As usual this is through third party design houses. We’re making pump frames for SPX and are fabricating very high tech pressure vessels through MI Swaco/ Cyclotech,” he explains. 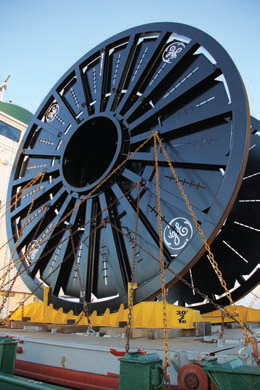 The company’s momentum continues to grow throughout 2013. It has just won another major contract with MI Swaco on the Hebron Field in Norway. Again, the project calls for Forsyths’ industry recognised standard in duplex and super duplex pressure vessels. “This is where our investment into new facilities has really come into its own,” elaborates Richard. “It has made this investment very worth while and the facility is catering for these contracts very well,” he concludes. Underpinning the company’s continued growth and acquisition of prestigious contracts is the firm’s solid reputation for supplying high quality results, which enables it to reply on repeat customers. One example of this is the firm’s continued work with GE Wellstream to provide flexi pipe reels, which it has been making for over 15 years and maintained an excellent level of customer satisfaction.

Looking to the rest of 2013 and beyond Forsyths remains optimistic about the road ahead and expects the oil and gas industry to remain buoyant, so much so that it is actively looking to purchase further holdings and land in Buckie to accommodate for future business. Similarly, the company has hired more than 30 new members of staff across its business with 75 per cent of them focusing on oil and gas operations. This is to allow greater focus on the Laggan project, but also in anticipation of future projects. Its two main areas of business remain to be oil & gas and distillery work and for at least the next three years the company expects to continue to grow as both its whisky and offshore partnerships continue to expand.

Forsyths dynamic growth is powered by its commitment to providing a quality service and its dedicated investment in to its fabrication infrastructure. Time and time again the company has been on the receiving end of high praise for its skilled workmanship and on time deliveries. The company’s quality control regime is defined by extremely strict practices and comes as a result of a comprehensive training programme that all apprentices entering the business are expected to participate in to gain fundamental knowledge and understanding. The company has become a specialist in many exotic metals including duplex and super duplex. The offshore industry is increasing its use of these relatively new materials as they are very resistant to saline water. Forsyths has invested heavily in acquiring the knowledge and skills required in the manufacture of products in these metals, alongside the more traditional stainless steel, copper and titanium materials.

Recent moves made by a large number of oil and gas companies venturing into increasingly deeper waters have seen a growing requirement for flexi-pipe and umbilical products. This has resulted in an increased demand for operational and storage reel structures, and Forsyths has again invested heavily in developing its own designs for these to meet the ever more onerous client and certifying authority specifications and requirements. This has led to the largest reels designed and fabricated by Forsyths to date being 11.4m diameter, weighing 80 tonnes and capable of holding 400 tonnes of product.

By remaining flexible and able to adjust to the needs of the oil and gas industry, Forsyths has earned a reputation as a reliable specialist able to provide tested solutions to a variety of applications. Moving forward, the future for the company looks very buoyant indeed.