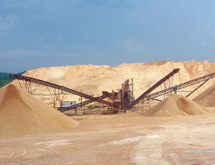 In a growing industry, there is always more to learn. The boom in oil and gas, aided greatly by the development of hydraulic fracturing, has bolstered economies in states such as North Dakota. The International Energy Agency projects the United States could even surpass Saudi Arabia and Russia to become the world’s biggest oil producer by 2020. The technology to retrieve these once-trapped reserves has been in place for a few years, and Tony Little, founder and president of Fortress Proppants, says the industry is still perfecting the art of hydraulic fracturing.

“As we’ve seen in North America, the fracking industry has had significant growth and it grew fast,” Little says. “Now we are in a position where we are evaluating how we can do it better and more economically. The trend going forward is about using the right proppant and making sure it is the right application for the given reservoir.”

Choice Material
In general, the hydraulic fracturing process is applicable in many areas. Reservoir by reservoir, however, Little explains that there is an ideal proppant for each project, which is why Fortress Proppants is entering the frac sand and resin-coated frac sand market with the purpose of offering more choices.

The company has teamed up with Natchez, Miss.-based sand-mining operation Magnolia Frac Sand. Magnolia is a subsidiary of The Blain Companies, a heavy highway construction company with affiliated sand and gravel production companies founded in 1945. The Magnolia mine has been in production for the past 20 years, mining and processing sands for a variety of industries. With its agreement with Fortress Proppants, the oil and gas industry now will be on that customer list, as well.

The exclusive contract stipulates that Magnolia will manufacture frac sand to American Petroleum Institute specifications and sell it to Fortress Proppants, which Fortress Proppants will market and sell. Fortress will also take care of logistics and the company has the upside of sitting near the Mississippi river.

“We are located on the Mississippi River, and although we do have the railway and trucking as a means of shipping, most important is, from an economic and logistical standpoint, the ability to ship by barge,” Little explains.

Magnolia is adding equipment to process 300,000 to 350,000 tons of frac sand per year, with plans to ramp up to 700,000 tons annually in its first one or two years of operation. The plant expects to be processing frac sand by the summer of 2013.

Adjacent to the existing plant, Fortress Proppants plans to build a resin coating plant to offer the industry a value-added fracking option. Little explains that although resin-coated sand is more expensive, it performs better than regular frac sand, and the incremental oil and gas production efficiencies that it offers makes the process ultimately more economical for them in the long run. More companies are beginning to realize that.

“By resin-coating the sand, the sand bonds together in place in the fracture, which stops it from flowing back,” Little says. “The resin also makes the sand physically stronger so it survives better in the formation.”

Intent to Expand
Fortress Proppants is building the resin coating facility to process 290,000 tons per year out of the overall 700,000 tons per year that will be produced through Magnolia. The company is securing financing for the plant, which Little expects to open in mid-2014. The facility will open with two lines with room to open two more and expand capacity.

“The current strategy is to get the Mississippi project up and running but we are already discussing other places in North America and around the world,” Little says.