Back to Profile Gallery > Fugro

Established in Norway, but also with a presence in West Africa, Fugro RUE AS (FRAS) is a subsea service company, supplying the global oil and gas industry and other marine industries on a direct basis.

Since FRAS was established in 1993 the company has undertaken a wide range of subsea service operations, which today includes complete offshore diving and ROV operations in addition to in- and nearshore diving, engineering and vessel operations.

As such the company has been involved in inspection repair and maintenance (IRM) works, subsea construction, installation and decommissioning, and emergency oil recovery. Within this scope, FRAS has a wide range of equipment to offer customers, which can be assembled into a package according to individual needs and in line with internal and external requirements. All services are conducted with the latest technology and highest quality equipment operated from FRAS’ own or chartered vessels. Investment into new subsea equipment and technology is also ongoing in order to ensure the business is capable of handling all current and future requirements. Fugro manufactures its own ROVs and subsea tooling, and FRAS has direct access to this technology, and can supply equipment according to the client’s needs.

The Fugro RUE name came about in 2010 when Riise Underwater Engineering AS (RUE) was acquired by global service provider Fugro, which has enabled FRAS to grow further. Now, being a part of Fugro Subsea Services, has given FRAS the opportunity to access the Fugro resource pool with around 50 vessels and 160 ROVs. Delivering its services and diverse line of products through a global network of offices and facilities, FRAS operates within the Fugro Subsea Service Division, with its main areas of operations being focused on West Africa and the North Sea. FRAS began working throughout offshore West Africa, although predominately in Nigeria, in 2005 and has since continuously successfully supplied vessel, subsea and topside engineering and service support for a number of clients in this area.

The company’s first contract was IRM air diving and topside services for Shell (SPDC) in Nigeria on the Forcados and Bonny offshore fields. From this point FRAS has successfully executed subsea service projects across the region for clients including: ExxonMobil, Shell (SPDC and Snepco), Subsea7, Acergy, Addax and Perenco. Specially designed vessels, the latest within subsea intervention and diving technology and equipment means that underwater operations performed by FRAS are safe, cost effective, and carried out by experienced and competent personnel. 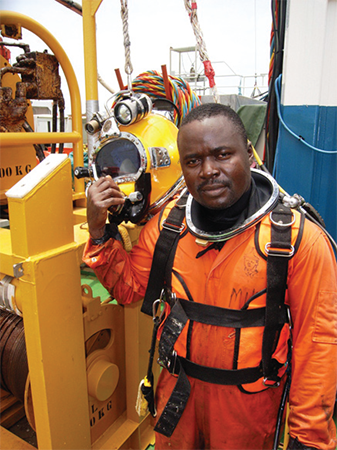 As a global supplier of complete services, FRAS also undertakes operation of special subsea support vessels, which have been proven in the fields of IRM and light construction. The fleet consists of the Fugro owned diving support vessel (DSV) Risøy and the multi-purpose support vessel (MPSV) Atlantis Dweller, as well as the Eidesvik Shipping owned MPSV Viking Forcados on a bare boat charter term. Both the Atlantis Dweller and Viking Forcados target the West Africa region, whilst the Risøy operates around Norway.

Each vessel has been developed for its specific line of work, which in the case of the Atlantis Dweller is to operate as a subsea support ‘toolbox’ and compact work platform for modular air/saturation diving, ROV support and module handling. Delivered at the end of 2009, the vessel has a very compact design allowing for a unique operationally flexible solution, as well as an interior and design focused on crew comfort, making the Atlantis Dweller a rare cost effective, environmentally friendly and pleasant workspace.

Since FRAS first began operating with the Viking Forcados in 2005, the vessel has gradually been transformed into a very cost-effective subsea support work platform including an onboard dual basket air dive spread and light diving boat (LDB). Likewise, the vessel is also specially outfitted for SPM inspection, maintenance, and repairs. Completing the fleet is the fully equipped DSV Risøy, which has been performing IMR diving for Statoil since 2000 as part of a long-term frame agreement, and this contract is still on-going. This is a very complex operation, which involves the jack up of concrete elements of 150 meters, and is rated to be one of Statoil’s most complex operations in Norway.

As a major aspect of the business, FRAS owns and operates several air/nitrox dive spreads and LDBs. All FRAS dive equipment is used in accordance with the International Marine Contract Association (IMCA) and NORSOK standards as a minimum. The company’s dive teams consist of an experienced in-house pool of superintendents, supervisors and divers, as well as external experienced freelance divers.

Another area of expertise is the provision of professional and cost effective ROV solutions, specialising in the rapid mobilisation of this equipment for the North Sea and West Africa. In addition to its own fleet of eight ROVS, FRAS has access to the global fleet of Fugro vessels, ROVs, and locally provided survey and positioning service. The company’s fleet consists of high performance ROVs developed together with world leading manufacturers to offer state-of-the-art solutions based on years of industry experience. Specifically, FRAS operates both work class ROVs (WROV) and observation class ROVs (OBSROV) based on a philosophy of standardised module systems, which are easy to mobilise. In 2012 FRAs won a frame agreement with Statoil for drill support, which was the first step for FRAS to be an established North Sea player.

Emptying oil from ships or wrecks following an incident is a task that requires great delicacy and special expertise, the likes of which FRAS has acquired following several successful emergency oil recovery operations. In the past the company has mobilised on oil emptying and emergency offloading assignments for the Norwegian Pollution Control Authority (SFT) and Norwegian Coastguard, the Icelandic Ministry of Environmental Protection and a major Swedish insurance company. FRAS has therefore developed quality assured operating procedures and an impressive stockpile of specialist equipment and pumps, which is held on standby at the company’s base in Haugesund for mobilisation at short notice.

Within all of these activities FRAS’ philosophy remains the same in adding value to its clients through safe and cost-effective execution of subsea services. To this end the company has developed a competent organisation with the capacity for further organic growth, which includes investing in strategic assets and new technology. FRAS also has a dynamic investment scheme for acquiring new dive spreads to meet the growing demand for diving services. FRAS therefore hopes to see the company established as one of the preferred suppliers of manned and unmanned subsea services in the market.