Back to Profile Gallery > Gasum Oy

During the last few years the role of gas has changed in Finland. Gasum Oy has, for nearly 40 years, been the country’s natural gas network operator responsible for transmission, import and sales.

It began in 1974 as Neste Oy but became Gasum in 1994 following a takeover by a consortium currently consisting of Fortum (31 per cent), Gazprom, (25 per cent), E.On Ruhrgas (20 per cent), and the Finnish Government (24 per cent). It remains vertically integrated, one of the few remaining gas companies to be so in Europe, and employs approximately 250 people. Finnish gas consumption peaked in 2003 and has since declined due to highly competitive renewable alternatives, but Gasum Oy is transforming its role to remain relevant.

With no natural gas resources of its own, and with no pipe connections to the rest of Europe, Finland imports all of its supply from neighbouring Russia. This is piped into the southern part of Finland and into the capital Helsinki, where gas consumption is currently most concentrated. Central and Northern Finland currently have no natural gas pipelines. At its peak in 2003 total consumption volume equalled 4.7 billion cubic metres; predictions for the end of 2012 are set at 3.7 billion cubic metres. Power production companies use approximately half of this figure and the other half is consumed by industrial applications, although within industry about 50 per cent is used for further power generation. In total, two-thirds of Finland’s gas is used in combined heat and power (CHP) production.

“The reason for the drop in gas consumption is its high price when compared to alternative fuels and electricity price,” states vice president of Transmission Systems Operations, Ari Suomilammi. “A situation has also arisen where gas is acting like a back-up for other fuels, meaning peak loads are increasing whilst volume is decreasing – for example during 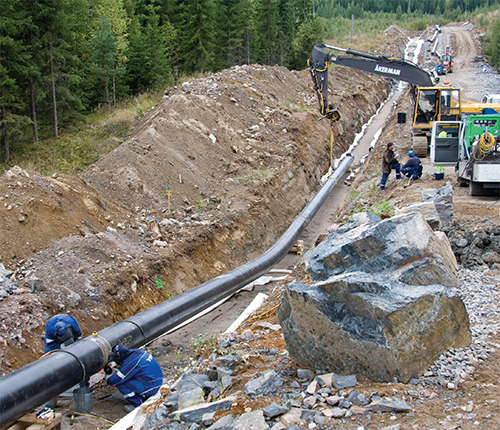 particularly cold winters or disturbances in renewable energy generation, gas is a convenient and easy method of picking up the slack. To respond to these sudden spikes in consumption we are now planning to build an LNG terminal on the Southern coast and interconnector to Estonia that will also connect to the rest of the Baltic market. It forms part of the European Commission’s strategy to remove the continent’s ‘energy islands’, which currently are Finland and the Baltic countries. The target of the EU is to have these connected to the rest of Europe, creating an alternative supply source for the countries and guaranteeing security of supply.”

LNG will supply the Finnish domestic gas network mainly for peak shaving, and in addition to that also as fuel for ships and off-grid industry. The terminal, together with the interconnector, is an essential component in connecting Finland’s pipelines to the rest of the continent. Gasum is also installing additional domestic pipelines in order to achieve the needed transmission capacity. One such line runs between Mäntsälä and Siuntio, a 90-kilometre pipe that was completed in early 2011 and has already proved beneficial since it came online.

“The problem is that our pipeline system is operating at a low pressure: 54 bars maximum, whereas central Europe has a maximum of 100 bars or even more,” Ari says. “Modern gas turbine power plants require a pressure of 30 bars so the margin that we had to play with was very limited. There are no natural gas storage facilities in Finland so the only flexibility tool we had was utilising linepack. Pipes such as the Mäntsälä-Siuntio line were built to guarantee pressures in Helsinki are at a sufficient level for CHP to remain in operation. It created a ring road toward the capital city that increased the security of supply in the area.”

Gasum has been developing several other pipes around the country. This includes one located on Finland’s southwest coast, in the city of Turku. Designs for the pipeline were completed several years ago and the company is just awaiting the final decision from Turku’s municipal council as to whether the city will use gas as a fuel. A coal-fired powered plant that is now reaching the end of its life currently powers the region; gas is one option for replacing it, but the Turku municipality is also looking at multi-fuel unit solutions. Gasum is confident that natural gas can form part of that solution but the final decision on it will depend on factors including the price and availability of gas. A new pipeline will be a major advantage in winning the municipality over. This example reflects the role of gas in the wider network.

Despite Finland’s changing attitude toward natural gas, it remains clear that the fuel will continue to be an important part of the country’s energy future due to its versatility. “About ten years ago there was a decision to rely on nuclear power and renewables as an answer to our energy questions, but a recent statement by the Government endorsed the integration of natural gas transmission systems with the rest of the EU,” explains Ari. “This political boost means there is new interest in developing the pipe network as a means of handling periods of energy usage spikes. As the national operator and importer of natural gas, we look forward to developing the infrastructure.”