Back to Profile Gallery > Gasunie

For sheer scale this consists of over 15,000 kilometres of pipeline across the Netherlands and northern Germany, dozens of installations, and around 1300 gas-receiving stations, achieving a total annual gas throughput of approximately 125 billion cubic metres.

Furthermore, Gasunie is the first independent gas transport provider with a cross-border network in Europe and offers these services via its subsidiaries Gas Transport Services B.V. (GTS) in the Netherlands and Gasunie Deutschland in Germany. The company also deals in other gas infrastructure services such as gas storage, LNG and certification of green gas. Due to the reliability and strategic location of its network in relation to growing international gas flows, the Gasunie network forms the heart of what is known as the north-west European ‘gas roundabout’.

This roundabout consists of infrastructure belonging to GTS and Gasunie Deutschland, which serves both home markets, as well as linking to different ‘junctions’. Each junction either brings gas to the roundabout, such as through the Nord Stream and BBL pipelines, stores it in order to meet fluctuations in demand, or stimulates the market for green gas. Together, the whole system ensures that gas can be easily transported between Russia and the UK, from Belgium to Denmark, and even Qatar to Rotterdam as LNG. It is Gasunie’s Participations and Business Development unit, which makes these junctions possible – many with the support of various business partners.

In September, the newest addition to this roundabout was formally opened by Queen Beatrix, as the first Dutch terminal for LNG. Paul van Gelder, chief executive officer of Gasunie, elaborates on the impact the new Gate terminal will have upon the business: “Gate terminal is an outstanding example of teamwork between Gasunie and Vopak, a worldwide leader in tank storage terminals. With the opening of the terminal, the Netherlands is now connected to the global gas market. This means diversification of supply sources, which in turn strengthens our security of supply and enhances the workings of the energy market. As such, these are all positive developments for the north-west European gas roundabout and market – what it means for Gasunie is what it means for the future energy mix in the Netherlands.”

Certainly, the role of gas in the Netherlands has remained prominent ever since the discovery of the enormous Slochteren gas field in the province of Groningen in 1959. It was at the same time that the foundations for Gasunie were laid. The discovery kick-started a massive national project to get as many homes and industries as possible connected to the new natural gas network in the minimal amount of time. “Since then the Netherlands has been known throughout the world for its gas know-how and experience, and you could say Gasunie is still synonymous with that. Energy doesn’t stop at borders, which is why we’re an international company with a clear strategy to achieving further cross-border integration,” elaborates Paul. 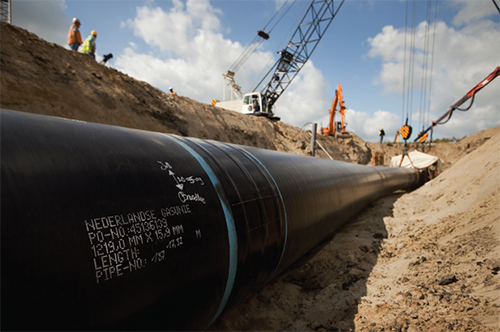 Due to rising demand for gas, and growing imports and exports within Europe, more gas will be offered at a number of border points in the Dutch gas transmission network over the coming years. One aspect of this is the new North-South Expansion Project, which forms an important addition to the gas roundabout of north-west Europe. “With the gas roundabout philosophy we are bringing many more billion cubic metres (bcm) of gas to north-west Europe via the Nord Stream pipeline, and the new Gate terminal. With our Title Transfer Facility (TTF), the Netherlands is also now the leading continental trading hub in the virtual market. Such virtual trades often also mean increased physical transport,” explains Paul.

He continues: “The combination of the new gas flows, both to and within the gas roundabout, requires extra transport capacity in the national high pressure network, and this is the gap which the North-South Expansion project aims to fill. The project has been carried out in phases, with phase one opening last year. This entailed 275 kilometres of new pipeline, state-of-the-art drilling of a four kilometre long tunnel under the River Ems in Germany, and a new compressor station at Scheemda.”

In just the last month phase two has been launched, which saw another compressor station being built, and 100 kilometres of pipeline laid. The final phase, which is to be completed in 2012, will add almost the same volume of pipeline again to the overall expansion of the network. “In total we have approximately 11,000 kilometres of pipeline in the Netherlands, so this additional 500 kilometres might not seem much in the grand scheme of things,” begins Paul. “However, when you consider how densely packed the Netherlands is in the west, it’s quite an achievement to be able to still lay pipelines in that area, including drilling under Schiphol Airport. We only build where there is a need for it in the market, and our primary concern is to facilitate that market. The North-South expansion project is the result of consultation with the industry to assess the need for new transport capacity and so the end result should be satisfied customers.”

With much of the world looking at ways to achieve a cleaner energy future that is affordable and reliable, traditional fuels such as gas are often maligned but Gasunie is keen to underline gas’ potential as part of the whole sustainable energy mix. “The role of gas is changing, and we’re seeing increasing levels of support for the fact that gas will be the crucial backbone for this sustainable energy of the future. This is not only as a flexible back-up and support for the fluctuating supply of solar and wind energy, but also in the form of biogas, making gas greener and greener,” highlights Paul.

As a gas infrastructure and network company, Gasunie wants to be the linking pin between energy and sustainability. Therefore, for the long term much of its strategy is tied up in encouraging this integration by investing in energy storage facilities, pipelines, and reprocessing sites. The company also plays a vital role in building the north-west European gas roundabout, which offers greater energy security through cross-border connections, and in promoting market forces – including those for sustainable energy that will help develop it into a realistic option for consumers.