Responsible for a network of over 15,000 kilometres of pipeline and approximately 1300 gas receiving stations in the Netherlands and Northern Germany, Gasunie is a highly experienced gas infrastructure business.

Serving the public interest since its foundation in 1963, the company manages an annual gas throughput of over 125 billion cubic metres. As the first independent provider of gas with an international network in Europe, the organisation offers transportation services through its key subsidiaries Gas Transport Services BV (GTS) in the Netherlands and Gasunie Deutschland in 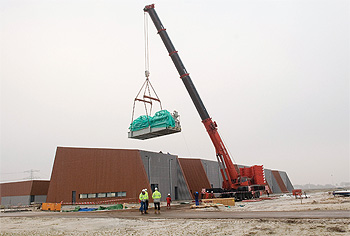 Germany, which identify the future needs for transportation capacity in line with customer specification and business investment. Gas storage and LNG supplies are also part of the company’s portfolio with the highest standards of safety, reliability, efficiency and sustainability being maintained throughout.

Due to its reliability and strategic location in relation to expanding international flows, the Gasunie network forms the core of the Northwest European ‘Gas roundabout’. The organisation is one of the shareholders in the Nord Stream pipeline project and is the majority shareholder of BBL pipeline. Its active and pioneering work in the promotion of renewable energy applications has seen it become the first company in Europe to issue certificates for trading green gas, which is done through the subsidiary Vertogas.

Gasunie Zuidwending BV was established as a separate entity in 2006 in order to operate the Zuidwending gas storage facility that is currently under construction in salt caverns in the northern part of the Netherlands. This gas storage facility is purpose built to provide flexible services to the market in order to guarantee the reliable supply of natural gas. The temporary storage of gas in salt cavern formations makes it possible to respond dynamically to peak demand. Characterised by an imbalance in supply and demand the European gas market is experiencing an increase in demand with a reduction in natural gas availability. As such growing imports will start to come from international regions such as Russia, Africa and the Middle East, and the establishment of long distance pipelines will increase dramatically. Gasunie Zuidwending has been created to facilitate the demand and its wide range of customers are national and international gas carriers and gas traders that require increased flexibility of service The majority of its client base operate in the power and small-scale consumer market, as well as the wholesale arena, while some parties may be active on the TFF (Title Transfer Facility).

Reinalt Nijboer, project development manager of Gasunie Zuidwending, outlines its key benefits to customers: “The main advantage of temporary gas storage in Zuidwending is the short-term flexible response to peak demand for natural gas, on a daily basis, for example. Similar salt cavern storages do not have the ability to react so quickly while we possess a large volume of working-gas and can operate with a high send-out and send-in capacity. The facility is developed as a multi-cycle utility and customers profit from our fast service and dedication to the service of third parties only – we reserve no capacity for our own use. We treat all clients equally with transparent tariffs and standardised contracts, while our strategic location means we are ideally situated in the vicinity of the Gasunie gas grid.”

As a natural gas storage buffer the facility consists of four salt caverns and a large gas plant comprising of an injection system and send-out system. The salt caverns have been leached in the large salt dome near Zuidwending in preparation for the storage of Groningen gas and have a cross section of 50 to 60 metres and a height of approximately 300 metres. Situated at a depth of 1200 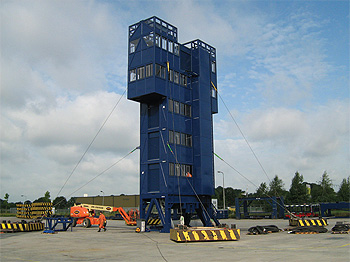 metres the four caverns will have a total geometrical volume of 2.3 million cubic metres, to be operated at a pressure of 180 bar yielding a working gas volume of roughly 200 million cubic meters. The complimentary injection system incorporates five compressors with a total capacity of 60 megawatts. Whilst currently under construction the gas plant is nearing mechanical completion and the caverns are in the phase of first gas fill, the storage buffer is expected to be operational by January 2011.

Reinalt outlines his vision for the Zuidwending development moving forward: “We have started drilling and leaching a fifth cavern that is larger than the other four and will have a geometrical volume of 900,000 cubic metres and the send-in, send-out capacity will be increased significantly. We plan that this additional infrastructure will be operational by 2014 and we are planning the establishment of a sixth cavern. Gasunie Zuidwending will open its doors in January 2011. Considering the developments of the industry and the unique selling points of our facility we expect to do good business and have a healthy future. Our parent Gasunie is looking to become involved in the expansion of storage capabilities in Western Europe to become a leading storage operator serving the evolving gas market. ”