A service company specialising in geology, hydrogeology and environmental analysis, GEO-data was first established in 1978.

Originally conceived as an engineering company that offered its services exclusively to the oil and natural gas industry, it was just four years later that it added environmental geology to its catalogue of services.

“Having already made great strides in a relatively short space of time, 1985 saw the company get its own laboratory to carry out environmental analysis on pollutions levels, drinking water contamination and other factors,” explains Boris Nadolny, operations manager of GEO-data. “In 2008 this laboratory was enlarged in order to carry out isotope analysis. This development helped bring the company forward to a position where today it offers a complete package of mud logging services from the well set to the lab work.

“GEO-data has been in this field of business for many years and it is its sheer level of knowledge that goes some way to setting it apart from others operating in the same market sector. Another strength is the fact that all of its operations and the linked equipment, software and training programmes are available and carried out in-house and direct from the company’s head offices.”

In Germany, where it is unquestionably the leading player in its field, GEO-data works extensively with the likes of ExxonMobil, RWE, GdF Suez and Wintershall. Outside of its home market it is currently involved in several large projects in Poland with ConocoPhillips and Talisman, and further afield in Kazakhstan: “With the lead it is taking in adopting more unconventional methods of gas and oil extraction, Poland is certainly becoming a focal point for GEO-data in Europe, particularly as the industry waits to see when German based companies make the jump into this type of activity,” Boris continues. 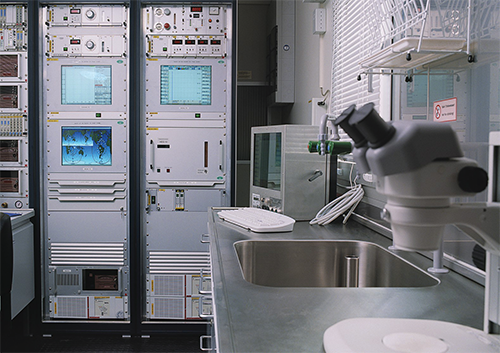 An area of particular importance for the company today is its work in the field of mud gas isotope logging. During this process gases are carried with the cuttings in the drilling mud, allowing them to be sampled for isotope analysis. This isotope analysis on mud gas samples and headspace gas samples from canned cuttings provide economically important information on the depth-related distribution of free and adsorbed gases in the borehole. Isotope analysis is used for three applications with potentially huge cost savings, fracture prediction, frack backflow allocation and production monitoring.

“Current trends show that there is a lot of work ongoing in this area of analysis, particularly in the US where companies like GEO-MARK are carrying out isotope analysis to distinguish zones of higher oil and gas probability just by comparing head space gas samples to mud gas,” Boris highlights. “What this technological approach allows the operator to do is locate areas of higher probability that will act as the point of interest when it comes to the fracking process.

“Although isotope analysis has been known within the conventional oil and gas industry for the better part of 25 years, it has always been rather neglected. Now, thanks in large part to economic influences, what you find is that shale gas operations are required to be conducted in a much more cost effective manner. This attitude has shifted attention to methods like mud gas isotope logging, thus it has become a much more common tool, particularly in the unconventional section, in the last few years.”

As the company’s work load increases, GEO-data is continuing to work towards making improvements to the way it conducts its analysis work: “From an equipment perspective, what the company is trying to do is address the time delays that occur between isotope samples being physically recorded and the results themselves produced,” Boris says. “At present the average amount of time this takes is two weeks, however what GEO-data is aiming to create a way to carry out the entire process at rig side, making it a real-time process, rather than a time-delayed one. The research into this represents a large scientific undertaking that hopefully will yield its first positive results during 2012.”

Looking further ahead, Boris is quite confident that the future of the company will be one of expansion: “The focus in the years to come will be on taking GEO-data and applying its skills in other Eastern European countries such as Bulgaria, Romania, and Ukraine. The company is certain that it is in this part of the world where the shale business will really grow rapidly in the not-too-distant future, which is why it will continue to invest man power and resources into these countries, introducing the GEO-data brand to a completely new portfolio of clients.”