Founded in 1830, George Dyke Forgemasters success, which is attributed to being able to identify modern requirements for forgings and responding to this appropriately, has led to it today being one of major forgemasters still in existence in the UK today. 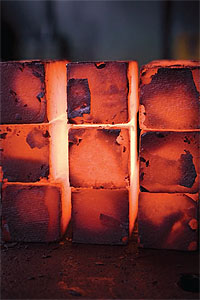 Having built up areputation for its expert ability to manufacture and supply a range of forgings from its site in Willenhall, Staffordshire, it was in 1980 that the company was acquired by the Dowdeswell Group, the UK’s last-remaining reversible plough manufacturers, primarily to produce earth-wearing implements.

“For a period of time agriculture made up a large percentage of the company’s turnover,” explain Gary Smith, sales manager of George Dyke Forgemasters. “This however changed as the business diversified over the years, expanding into other markets including petrochemicals, commercial vehicles, construction, mining and utilities. Today the petrochemicals market plays a hugely significant role in the company’s fortunes, accounting for approximately 23 per cent of its total turnover.”

Able to meet all manner of forging requirements, George Dyke Forgemasters boasts the in-house capability necessary to produce drop, press and upset forgings. As well as supplying a comprehensive range of off-the-shelf items, the company is well versed in producing bespoke applications. This ability to create solutions that solve individual client issues and problems is just one of the many traits and qualities that set George Dyke Forgemasters apart.

Committed to offering high quality products, supported by first-class service and delivery, at a realistic market price, the company also specialises in working closely with its customers to identify the latest trends and demands affecting the industries in which it operates.

“George Dyke Forgemasters’ unrivalled technical ability has historically allowed it to supply solutions that meet engineering problems of all types and provide the company with a high level of diversity when it comes to its manufacturing options,” Gary continues. “In addition to the aforementioned capabilities, the company is also able to undertake cold press and hot forming work, and actually has its own in-house heat treatment capabilities, which fully comply with API6A and shot blasting facilities. Whereas the vast majority of UK-based forgemasters rely heavily on external subcontractors to carry out this type of work, George Dyke Forgemasters is in many ways a one-stop-shop for all its clients’ needs. This flexibility is definitely considered as a major strength of the business.”

With its track record, historical significance and industry-leading status it comes as little surprise that a steady stream of contracts continue to be won by the company. At the start of the year, in January, it successfully tendered for a two-year contract from one of the industry’s more respectable internationals players. This specific contract involves the supply of all of the customers’ clamp segments up to a certain size range and represents just one of many accolades George Dyke Forgemasters has been bestowed in recent years that it is extremely proud of. 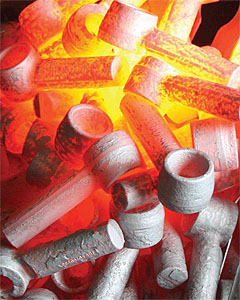 In the last several years the company has made a number of investments in equipment and infrastructure, to the tune of around £1 million: “This capital has been spent on a series of improvements and facility additions that are designed to increase the company’s in-house capabilities and thus its size,” Gary says. “A number of new air hammers have already been installed, while work continues in a number of other areas. Furthermore, George Dyke Forgemasters has been given capital authority to go ahead with the installation of a new CNC machine in its tool room, and also a new state-of-the-art CNC saw to cut materials to their required lengths.”

Further new plant is now fully commissioned for non-destructive testing, while a new dye penetrant line and additional magnetic particle inspection have also been installed to cope with the ever-growing petro chemical business.

As business in the various industry sectors that the company operates in continues to be challenged by increasing levels of overseas Forgemasterscompetition, particularly that from developing economic powerhouses like China and India, George Dyke Forgemasters’ has remained true to its core values, combating this trend by selling on the quality of its products and its exceptional delivery performance.

A brief glance at its recent accomplishments proves that this approach has been hugely successful and the results of the company’s efforts have gone a long way to shaping what Gary believes will be a prosperous and exciting future: “The collective vision of George Dyke Forgemasters’ staff and management is to turn what is currently an annual turnover of £6 million into £9 million over the course of the next two-to-three years.

“Central to this will be the purchasing of larger forging equipment, so as to be able to build bigger, more complex parts, and the gaining of further quality accreditations from petrochemical regulators. Meanwhile, the company will work to continue to maintain its reputation for providing a degree of customer service and product quality that cannot be matched anywhere in the world.”