In Carey Davis’ words, America is definitely trending greener in its energy initiatives. While solar and wind are still the primary drivers of green energy, the Executive Vice President of Georgia Renewable Power (GRP) holds that these are not dispatchable like biomass, and the latter realisation is driving the launch of more and more biomass-to-energy initiatives. 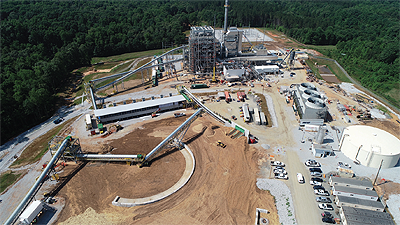 “Biomass is a fuel that makes sense in several situations. For example, all of the dead wood killed by beetles in California that create these terrible fires, needs to be taken care of and the best way to do that is to produce power,” Carey suggests. “The same goes for poultry litter and swine litter. Food production is only going to continue to increase and we need to have a plan to dispose of the waste. We believe that burning it and producing power is the best solution.”

GRP was formed by Raymon Bean and David Shaffer in 2013 when the two acquired a 20-year power purchase agreement (PPA) from Duke Energy. Along with it, they received offtake agreements for poultry, biomass, and thermal renewable energy credits (RECs). Then, GRP purchased an existing coal-fired facility in Lumberton, North Carolina, and began to retrofit the plant.

“It was during this first phase of the Lumberton development that I first met Raymon and Dave as I was part of the company that was performing the retrofit, turning the plant into a biomass burner that included a percentage of poultry litter,” Carey remembers. He goes on, discussing the subsequent stages of the site’s evolution in greater detail: “Phase 2 included the CHP portion of the plant. We worked with Industrial Mechanical Inc. to design a belt dryer that could take the waste heat off of the cooling tower and dry wood. By doing this, we are now capturing thermal RECs associated with our PPA.

“Then, the third phase, which is currently in its design and planning stage, will see us build a brand-new plant within the existing facility footprint that will be capable of burning 100 per cent poultry litter, thus creating a solution to the growing poultry litter concerns in the state of North Carolina. Finally, Phase 4 will entail the development of a pellet facility and the belt dryers from Phase 2 represent the first step to realising our pellet production ambitions. We are looking to add on to this process by creating a pellet division for overseas and domestic contracts,” Carey explains.

Exciting times
Around the same time as the acquisition of the Lumberton plant, GRP also began purchasing biomass PPAs in the state of Georgia. The upshot of this activity was the securing of 116 MW of biomass with PPAs tied to Georgia Power. GRP then divided these by two to create two new PPAs, each worth 58 MW. These later became the company’s facilities in Madison County and Franklin County, respectively.

“Both plants are almost 100 per cent ready, having already hit first fire. We will have synchronised to the grid by mid-June and will be commercially operational by the end of the month,” Carey discloses as we hold our conversation mere weeks before these plans materialise themselves. “Other than their overall size (they are of larger scale), we have implemented the same dryer technology that was created for Lumberton. What is different, however, is the purpose the dryer serves at Madison and Franklin. While it plays the role of a thermal REC generator at Lumberton, 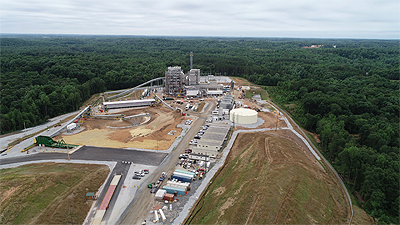 at the new facilities, we use it to dry incoming fuel, in order to improve moisture consistency and the plant heat rate. If our design basis holds true through testing, these two biomass plants will be the most efficient in the US,” he adds.

Expanding portfolio
It is unquestionable that GRP’s Georgia plants will contribute to the energy diversification the state is aspiring for. What is more, their development has already brought patent economic benefits to the region and their future operation promises to position them as a key fixture within the local communities of Madison County and Franklin County.

“These plants are the largest investments ever made in these counties, therefore, the tax dollars will provide a big boost to their economies,” Carey comments. “During construction, we were keen on hiring local labourers and contractors, and this policy of filling the available positions with local people continues during operation. There are also multiple downstream jobs that include fuel supply chain, restaurants, and others, created simply because of the size of the plants. We have also made a commitment to purchase county water and provided infrastructure upgrades for the county water systems, which has been to the advantage of everyone living there.”

Having got off to a positive start to 2019, in which the company’s main focus fell on getting the Madison and Franklin facilities operational and preparing for the third phase of Lumberton’s development, GRP is aiming to continue in a similar vein in the second half of the year. The organisation is already considering its possibilities to add new facilities to its portfolio and to do this, it will continue to rely on the support of the multiple partners that have walked beside it during its journey so far. These include engineers, suppliers, and contractors, as well as Veolia – the organisation that was selected to operate GRP’s plants last year.

“We are also thankful to Duke Energy and Georgia Power for their willingness to provide viable PPAs to companies like GRP for the development of biomass projects, and we are hoping to see more large-scale utilities following this trend,” Carey maintains. “In five years’ time, we are planning to have a strong five years of operation for our three flagship projects, as well as two or three other developments we are working on right now. As mentioned earlier, we want to expand our business portfolio into markets like pellet production and export, and to continue changing the biomass landscape in the US, making it a reliable source of energy for consumers and one that helps decarbonise the grid,” he concludes.