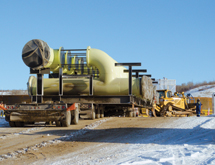 Gibson Energy hasn’t become a large midstream energy company in North America by standing pat. The company has become a major midstream player by continuing to find ways to improve and expand.

“As a midstreamer, we have tanks, pipelines and environmental services that can be custom-built to meet client needs,” Senior Project Manager Serge Paquette says. “The company doubled our employee base in late 2012 with the acquisition of OMNI Environmental in the U.S. and continues to be a growth-oriented midstream energy company.”

Today, Gibson has operations in some of the most hydrocarbon-rich basins in the world. The company has integrated operations that allow it to participate in the full midstream energy value chain. It transports millions of barrels of energy products each year through strategically located terminals in Hardisty and Edmonton, Alberta, as well as injection stations and small terminals in the United States. It also serves the refineries of North America and other end-users via pipelines, trucks and rail transport.

For 60 years, Gibson has provided market access to leading oil and gas industry companies in Western Canada. It has grown by diversifying its service offerings and expanding geographically to meet customers’ needs in key hydrocarbon-producing regions throughout the United States. The company also works to provide hands-on service between the producer and end-user, creating a service level that Gibson feels helps to set it apart from competitors.

Pieces of the Pie
Among the key pieces of its portfolio are Gibson Energy’s terminals and pipelines. This segment offers industry-leading storage terminalling and pipeline services for oil, condensate and refined products. Gibson owns and operates two major petroleum terminals and two pipelines in Alberta, Canada: the Hardisty Terminal, the Edmonton Terminal and the Provost and Bellshill Pipeline gathering systems.

“Our terminals provide storage capabilities, and we have agreements in place with our partners for most of the tanks,” Paquette says. “They can use the tanks for storage, they can blend in the tanks due to our blending facilities, and they can access the future crude by rail unit train system to move product to areas where the pipes don’t go. These are strategic alternatives where we give clients capacity options and ability to move product to different areas.”

The gathering systems consist of 495 km of pipeline that deliver crude oil to the Hardisty Terminal from more than 30 individual producer-owned production facilities. It includes 78 crude oil injection stations located throughout the oil-producing regions of the United States, primarily in North Dakota, Texas, Oklahoma, Wyoming, Louisiana, Montana and New Mexico.

The Edmonton Terminal is located in “Pipeline Alley.” It handles crude oil and condensates as well as diesel fuel and liquefied petroleum gas (LPG). It is serviced by both CN and CP rail systems, and it is connected to multiple inlet pipelines and major export pipelines. It also has multiple truck loading and offloading capabilities and truck-to-rail capabilities. The company recently announced a project at the Edmonton Terminal with Statoil Canada Ltd. to build a 300,000-barrel crude storage tank, a new rail loading rack and multiple pipeline connections.

As for the Hardisty Terminal, it is located within an important crude oil transportation hub that provides both of stream and merchant customers with diverse terminalling services. These include truck loading and offloading, blending and storage. It has 4.3 million barrels of storage and is fully connected and can receive crude oil volumes from Enbridge as well as other major pipelines in the Hardisty area. Its delivery systems allow customers to deliver to all major transmission pipelines in the Hardisty area, allowing access to major markets in North America.

Expansion Effort
Recently, the Hardisty Terminal has undergone significant expansion to its tank services. On the west side of the terminal, Gibson installed four 300,000-barrel tanks.

On the east side, Paquette has been overseeing a four-tank expansion.

“We are building the largest tank we’ve ever built, a 500,000-barrel tank,” Paquette says. “The rest are 400,000-barrel tanks, and we have agreements in place from customers for all four tanks. We’re also expanding the terminal’s ability to move crude by unit trains by building a pipeline to the facility being built by our partner U.S. Development Group.”

The east side project broke ground in October 2012 and is being done in phases. The first phase consists of completing the three 400,000-barrel tanks by the end of 2014 with the remaining 500,000-barrel tank slated for completion by April 2015. Paquette says there haven’t been many major challenges on the project. Using groundbreaking technology and installing stone piles overcame some soft spots, and bridge-lifting techniques were employed to ensure a solid foundation.

“The schedule is a challenge, as we are moving faster than a typical project because our customers need usage of the storage tank as quickly as possible,” Paquette says.

Civil piling work is complete, and power upgrades, structural steel work, pipe running and hard connections will all take place over the next few months. Gibson has learned a great deal on this project by trying new things such as modularizing its valve matrix. In the future, the lessons learned on the project should help Gibson continue to make the most of growth opportunities.

“Modularizing projects in areas like this where there is a lack of infrastructure can be effective,” Paquette says. “Overall, this has been a great project with an excellent safety record, great vendors and a great team.”