As Global Clean Energy has made known through its extensive conversion of an old crude oil refinery, low-carbon biofuels are not an ephemeral trend – they’re the future

In 2020, Global Clean Energy acquired a crude oil refinery in Bakersfield, California. For 70 years, that refinery had been a cornerstone in the local community of Kern County. Getty Oil, Texaco and Shell Oil Company all took turns running it, producing and distributing fuel for the region’s local motorists and agricultural industry.

In a way, that storied past is over. The historical legacy as a crude petroleum refinery has ended. However, that’s because a new one has begun. With CTCI Americas hired as lead EPC, Kern County’s largest oil refinery is going through changes.

Global Clean Energy is shaking things up. To be more specific, the renowned renewable fuels producer is re-tooling the 510-acre site, transforming it into one of the largest biorefineries in the western US – and the end is in sight. Following its conversion, the Bakersfield Renewable Fuels Refinery is expected to become fully operational by the end of this year. As Noah Verleun, President at Global Clean Energy, makes clear, the move is part of a wider, concerted national effort to decarbonize transportation fuels, and reduce overall impacts on the environment. 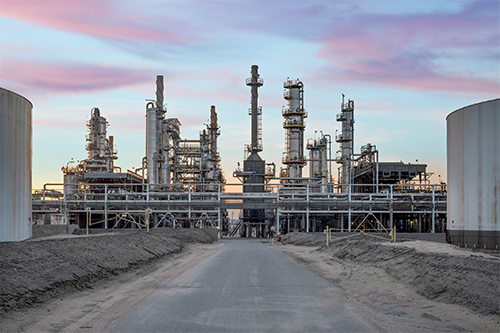 “Stakeholders are looking for a way to fulfil a just transition from declining careers in the fossil fuel industry into careers in clean energy,” he says. “The Bakersfield Renewable Fuels Refinery is a model for that just transition. Consider the location of our refinery: Bakersfield, California. When purchasing this former petroleum refinery, we looked at Kern County’s economic development goals for renewable energy, and their two biggest historical sectors (agriculture and traditional energy). By positioning ourselves in this region, we are taking all of that into account and combining it within a project that boosts regional goals as well as the local economy.

“Our renewable fuels refinery is also aligned with the goals of AB32, California’s Global Warming Solutions Act, reducing GHG emissions within the state and outside of it,” explains Verleun. “The refinery is part of a disadvantaged community, too. It has some of the highest levels of pollution and unemployment in the state. To that end, we’re providing high-paying, premium jobs in clean energy in a county which has some of the worst air quality in the nation. We’re reducing tailpipe pollution and economically benefiting those in a region that need it most.”

Indeed, the renewable fuels refinery has created more than 100 full-time jobs for members of Kern County, and has been indirectly responsible for another 900, thanks to the multiplier effect. That’s impressive, particularly for a region in which so much has depended upon the historic site. Once more, the Bakersfield Renewable Fuels Refinery will drive the local economy. At the same time, it will produce ultra-low carbon fuels and make the planet a more hospitable place for generations to come.

“By repurposing a refinery that was part of the traditional energy infrastructure, and combining that with low-carbon agricultural methods, we’re creating a business that will reduce emissions from air transport, intermodal trains, and heavy transportation, and it will be viable for decades to come,” says Verleun. “What we are doing in Bakersfield is a full-scale case study on how to integrate fully developed agriculture supply chains into fuel supply chains. It takes two traditional value chains – energy and agriculture – and integrates them in a facility which will be tailor built to produce renewable fuels in an efficient, low carbon, and highly sustainable way.”

For Global Clean Energy, though, that’s nothing new. The company describes itself as a uniquely positioned, vertically integrated nonfood feedstocks and renewable fuels company focused on producing fuel which is more sustainable, cheaper, and less carbon intense, without impacting food security or causing land use change.

“In the early 2000s, Global Clean Energy anticipated that spreads between agricultural and energy commodities would tighten and we made a strategic decision to focus on feedstocks and not biorefining conversion technologies like transesterification,” Verleun notes. “Today, those spreads have tightened and feedstocks account for an increasing share of production costs.” 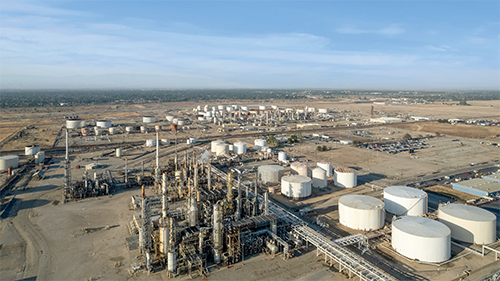 Consequently, Global Clean Energy decided to invest in a robust crop innovation program and began studying and advancing oilseed crops. “We spent years scrutinizing nonfood applications and the sustainable production of vegetable oils which can be easily converted using current technology to be drop-in for existing fossil fuels,” Verleun comments. “Along the way, we successfully applied for a Department of Defense (DoD) contract to create sustainable aviation fuel (SAF) in partnership with a technology provider and, in the end, we provided the DoD with SAF made from camelina oil.”

That’s key to the sustainable processes behind the Bakersfield Renewable Fuels Refinery. Their feedstock, camelina, is grown on idle farms between crop rotations. Cultivated on dry, fallow land, camelina doesn’t have an impact on food security or compete with food production – unlike traditional vegetable oil feedstocks like soy and canola. Since camelina is relatively quick to grow, maturing in as little as 80 days, it also requires far fewer inputs than traditional cereals and oilseeds.

For Verleun, that’s paramount: “Over the years we have developed a robust portfolio of intellectual property for nonfood oilseed feedstock like camelina,” he observes. “We knew we could scale the crop considerably and we’re now positioned to be a market leader in the renewable diesel space, creating ultra-low carbon fuels which act as a drop-in replacement for traditional petroleum-based diesel engines on the road today.”

When generating fuels such as these, though, the initial low-carbon feedstocks are essential to managing overall carbon intensity (CI). “Because Global Clean Energy is an integrated enterprise, we can further reduce CI at our Bakersfield Renewable Fuels Refinery through the implementation of efficient practices across our transportation and refining processes,” he adds. “To that end, we’re also evaluating solar implementation and carbon capture in our processes. Added together, these strategies can give our fuels a CI score of below zero.”

Once operating at full capacity, the Bakersfield Renewable Fuels Refinery will produce up to 15,000 barrels of renewable diesel per day, making it among the largest facilities of its kind in North America. Renewable diesel produced by the refinery will be purchased exclusively by ExxonMobil for a minimum of five years, offering up an extensive retail and wholesale market for the Kern County-produced product.

“The ExxonMobil deal will accelerate nonfood-based camelina cultivation in key growing regions in the US,” explains Verleun. “It will also progress the reductions of greenhouse gas emissions within the transportation sector.” On a similar note, Global Clean Energy has also entered into an agreement with AmeriGas Propane (the nation’s largest retail propane marketer) to buy and distribute renewable liquified propane gas (LPG) made at the Bakersfield biorefinery. AmeriGas will leverage its infrastructure and sales teams to market and distribute renewable LPG to new and existing customers, primarily in the state of California, which has come from low-carbon camelina feedstock.

There’s no doubt that Global Clean Energy is a future-thinking company. Put simply, abiding by the consensus of the global scientific community, it has to be. “Climate change is happening, and both Global Clean Energy and the Bakersfield Renewable Fuels Refinery will continue to invest in advantaged assets with carbon reduction as a core principle,” asserts Noah. “We’ve taken a long look at renewable fuel programs around the country and around the world, and we’ve concluded that the need for low-carbon feedstocks and fuels will continue to expand dramatically in the coming years before plateauing in the coming decades.

“As an organization, we’re not focused on short-term goals,” he concludes. “We’re focused on the big picture. All these steps in the evolution of renewable fuels are valuable. We expect society to continue to demand sustainable sources of low carbon fuels that create social, economic and environmental value over time. By expanding our existing advantaged assets, further developing our IP portfolio, expanding our cultivated acres footprint, growing strategic partner assets, and increasing the sustainability of our practices, we’re taking into account not so much how markets look today, but the long-term view of these markets – markets that will exist for generations and improve the planet in the process.”