The very first subsea cable ever installed was a copper cable that stretched from England to France on 29th August 1850.

It was laid by a small paddle-driven steam tug called the Goliath, and marked the advent of using water crossings for telecommunications infrastructure. Unfortunately, by the next morning the cable was no longer working, and appeared to have been pulled up at the shore end by the anchor of a French fishing vessel.

The history of subsea cable connection is both interesting and colorful, and one of the key companies that have been involved in that history since the 1850’s is Global Marine Systems Ltd. Today, Global Marine has a fleet of vessels that represents considerable engineering advances from the technology used in its firstcable installation in the 1800’s, and presently includes ROVs, cable ploughs and even a rocksaw trencher that can bury cable in rock to a depth of four metres. 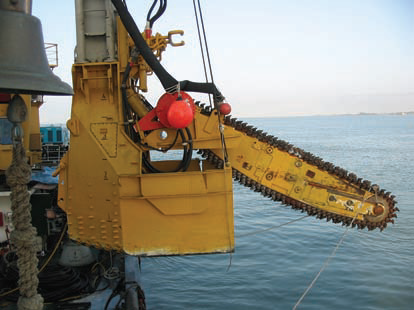 Today, in addition to its continued work in telecommunications, Global Marine Systems specialises in fibre cables that address the data, communications and remote facilities management requirements for offshore oil and gas fields. “Having a reliable telecommunications network to an offshore field is becomingvery much the standard in offshore oil and gas production. High speed data cables have resulted in significantly reduced field risks by both minimising the amount of staff required and allowing for remote supervision of field operations,” stated Ian Douglas, CEO of Global Marine Systems.

Global Marine has installed data connections between platforms, and from fields to shore ends, for a variety of companies with offshore holdings. “The newest big data trend we’re seeing in offshore fields is permanent reservoir monitoring,” added Barry Graham, sales director for the company. Also known as PRM, or sometimes as 4D Seismic, these systems have been installed by BP, Conoco Phillips, Petrobras, Shell and Statoil already, and more are in the pipeline, according to Barry. “It’s a significant investment to install PRM, and the technology is still relatively new, but so far reports of PRM systems enhancing oil recovery rates and improving operational costs are extremely positive,” he explained. “We anticipate this technology to have a major impact on offshore fields globally.”

“Many of the existing PRM systems have been installed using traditional oil and gas vessels, but we feel that our ships are a better option as they are specifically designed for smaller diameter cables, such as those used in PRM systems and telecom networks,” Ian explained. “There are a number of operational challenges for any vessel undertaking PRM installation including dynamic positioning, cable management and deployment, cable burial and water depth. We want to ensure those challenges are handled as efficiently as possible, which is why we want to see vessels that specialise in smaller diameter cable involved in the installation work.”

Global Marine also offers extensive experience installing cables in difficult conditions, and has recently signed a contract with Uninett, a non-profit company that supports Arctic Circle research institutions with high-speed networks. The new networks will link to the Ny-Ålesund research station, which is the world’s most northerly research community. “We’ve had an excellent track record with Arctic cable installations, which certainly add a dimension of complexity even for us, with our many years of installation experience,” Ian commented. “I think we offered a distinct advantage for Uninett because we have that extensive track record, but also because we have equally extensive cable routing and engineering services, which are important when planning cable installations even in the most straight forward conditions.”

Global Marine also has unique capabilities in hardware integration for subsea cable networks, much of which can be done onboard its specialised cable laying and cable repair vessels. The company uses a test bed facility at its headquarters in Chelmsford, UK, for continuous research and development on its state-of-the-art cable jointing technology and other technology advances designed to help its customers to reduce marine costs and manage the risks of offshore cable deployment.

It’s been over 160 years since that first subsea cable installation. Global Marine has had a passion for the business for all those years, while at the same time its technology, equipment and skills continually advance to accommodate the demands of both the telecommunications, and oil and gas markets.