Global Pipe Company (GPC) is a pipe manufacturer located in Jubail in the eastern province of Saudi Arabia. The company was founded in 2010 as Saudi- German joint venture and started its commercial operation in 2013. Global Pipe Company has worked on a significant number of line pipe jobs providing major quantities of Longitudinal Submerged Arc Welded (LSAW) pipes for Saudi Aramco projects. Seven months after our last interview with GPC’s management, the company has embarked upon a number of strategic investments targeting the optimisation of the 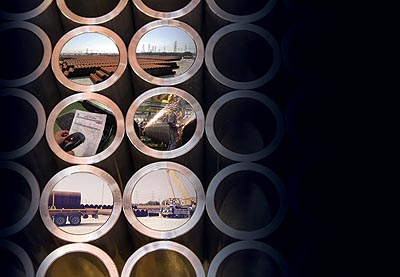 company’s products in terms of quantity and quality. In this issue, Mr. Ahmed Hamad Al-Khonaini, GPC’s Managing Director, and Mr. Maher Fkaier, GPC’s General Manager, give us an overview about GPC’s expansion plans.

Master Gas Project – mission accomplished
Over the last 15 months, Global Pipe Company has worked almost exclusively on the Master Gas Project. The major portion of the second expansion of this prestigious project (Master Gas Systems Expansion II – MGS II) was awarded to Global Pipe Company, with the company being chosen to supply approximately 550 km of the pipes required (from a total quantity of around 900 km).

The main size required for MGS-II is 56” in wall thickness ranging from 14mm to 26mm. Even though the required sizes, with big diameters and low thicknesses, are very challenging for the LSAW manufacturing process, Mr. Khonaini is happy to report that: “Global Pipe Company managed to finish the manufacturing activities within 15 months.”

“After some issues that we faced in the beginning of the project in June 2016, GPC developed an ambitious action plan to improve output and increase productivity. We have developed a new forming procedure for big diameter pipes for our JCO press, based on a wide shoe, reducing the number of bending strokes. We have also added an additional X-ray bunker to our manufacturing line and, last but not least, we have added some conveyer systems for plates and pipes to improve the manufacturing logistics and remove some bottlenecks in our manufacturing line,” added Mr. Fkaier. After putting all these measures in place, it was possible to increase the output to reach an average of 160 pipes per day. “This is a major improvement compared to the maximum output of 80 pipes per day at the beginning of the project,” added Mr. Khonaini. The last MGS-II pipe left GPC’s manufacturing bench at the end of September 2017. The company is now working on a new job for Saudi Aramco involving Sour-Service pipes in 20” and 24” and wall thickness ranging from 15 mm to 19 mm. The total quantity of about 6000 MT is required for Saudi Aramco pipe store replenishment.

The expansion plan – a new challenge
During the last board meeting held in Germany in May 2017, the board of directors approved the investment for a new manufacturing line for GPC’s Mill in Jubail. “The total investment of about SAR 100 MM has been approved for our new manufacturing line. The Board also approved the tight schedule for the erection and commissioning of this new line that should be ready for 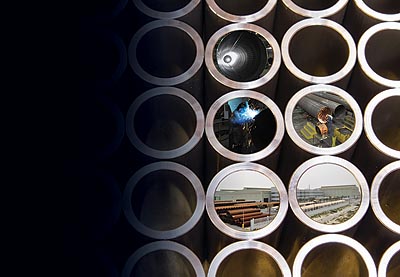 production in the third quarter of 2018,” informed Mr. Khonaini. The target of this expansion is to increase to nominal capacity of the plant to reach an impressive 400,000 MT. The new line will also allow GPC more flexibility in the execution of manufacturing orders. “The new line will be implemented as a completely independent line from the existing one. This will allow us to run two different manufacturing orders simultaneously and avoid interruption for orders in case of priority changes,” explained Mr. Fkaier. “Our experience with the Master Gas Project showed us that a higher output is required from the pipe manufacturer to feed the coating yards and then the pipe stringing activity at the project site,” added Mr. Khonaini. Located at the beginning of the supply chain for line pipe projects, GPC wants to be the driving partner for these jobs.

Asked about this new investment in these critical times for the worldwide oil and gas business, Mr. Khonaini highlighted: “In our local market, we cannot confirm the general down-trend observed in the international markets. We are dealing with an increasing number of enquiries for new projects for Saudi Aramco for the near future and the long term. The In Kingdom Total Values Added program (IKTVA) initiated by Saudi Aramco is giving us confidence that these new jobs will be awarded mainly to local suppliers. We are still observing significant quantities of pipes awarded to pipe manufacturers outside the Kingdom. For the Master Gas Project Expansion II mentioned previously, for example, about 40 per cent of the pipes required have been sourced from pipe mills outside KSA. With our new expansion and increased capacity, we are targeting the localisation of these quantities,” explained Mr. Khonaini.

With this ambitious expansion plan, GPC is also targeting the international market. “Inspired by the Vision 2030 of the government of the Kingdom of Saudi Arabia, GPC is aiming to explore new opportunities in The GCC and MENA area. The proximity to these markets and the high-quality Aramco standards GPC is applying, are making our products attractive to these neighbouring markets. By doubling our nominal capacity to 400,000 MT, we will be in the position of allocating production slots for these markets without neglecting our home market,” added Mr. Khonaini.

Smart machine selection for powerful manufacturing lines
Doubling the nominal capacity could be easily reached by simply doubling the existing machines. However, since GPC was also targeting to increase productivity and have more flexibility with independent manufacturing lines, a detailed study was undertaken to identify the required equipment. “Based on the pipes sizes involved in orders and the RFQ’s we have received during the whole period of operation, we have created a detailed analysis for the pipe dimensions and material grades involved. The analysis showed that a major share of our market involves big diameter pipes with quite low thicknesses. For this reason, we selected a three-roll-bending machine as the main forming machine for the new line,” explained Mr. Fkaier. “With the JCO press available in our existing line, we have the flexibility to cover the whole size range from 16” to 62”, but with lower productivity for big diameter pipes. The roll-bending machine cannot form small diameter pipes, but has a significantly higher output for big diameters. On the other hand, the detailed study has shown us that our existing line also has some limitations to provide pipes with smaller 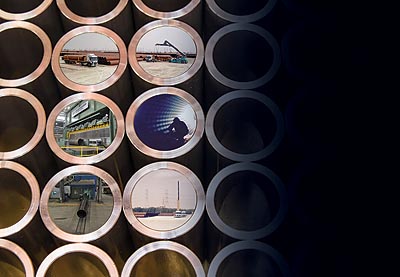 In order to have a completely independent pipe flow in the new manufacturing line and less interaction between the lines, GPC decided to add a new tack-welding machine to close pipes after forming. The new tack-welding machine will have a similar capacity to the one in the existing line with an additional laser tracking feature that allows the welding electrode to follow the seam automatically.

The new line will also have its own expander in the final control area. In addition to the stress relief on welded pipes, the expander will give the final shape for GPC’s products, making sure that the final dimensions are within the required range according to the applicable specifications. The new expander machine will cover the diameter range between 24” and 56”, and optimise GPC’s output in big diameter pipes.

A new hydrotesting machine is also one of the major equipment additions to the new line. The hydrotester will have the extended capacity of 650 bar allowing the hydro-inspection of heavy thickness pipes as per applicable specifications. The new line will also have its own NDT equipment. Two ultrasonic testing machines for internal and final inspection are part of GPC’s investment programme for the new line, as well as an X-ray bunker for pipe end inspection as per applicable specification.

GPC has selected leading European machine suppliers for the equipment for the new line. “One of the main reasons for our investment plan is to maintain the technology leadership in our market,” explained Mr. Khonaini. “Our target is to equip our new manufacturing line with the most advanced technology available on the market, from reliable machine suppliers with lengthy experience in the supply of equipment for pipe mills,” he added. GPC collected offers from several well-known machine suppliers. The final decision was made based on the liability of the supplier and the ability to provide machines meeting the requirements of GPC in terms of size range, good quality of pipes and good output. The contract with the pre-bending machine was signed with the German machine supplier AWS Schaefer GmbH. Schaefer has already provided two similar machines in the past to EEW pipe plants in Germany and Korea. GPC placed the three-roll-bending and tack-welding machines with Haeusler AG in Duggingen, Switzerland. The Swiss-German machine supplier has a vast experience in the supply of these machines, building the forming area in the new manufacturing line. “With about 26 similar roll bending machines, we think that Haeusler is the right supplier for this kind of equipment for our investment,” noted Mr. Fkaier.

SMS Group GmbH in Moechengladbach in Germany was selected as the supplier for the expander and the hydrotesting machines. “With the total number of 17 installed expander machines from 2002 and 19 hydrotesters from 1971, SMS Group presented us strong references in pipe mills with similar scope of business.”

The UT equipment was placed with GE Sensing & Inspection GmbH in Huerth in Germany. “GE convinced us with the most advanced ultrasonic phased array technology and operator friendly setting of the testing machines, saving valuable time in our daily manufacturing activities,” explained Mr. Fkaier.

The local content was also one of the major criteria for machine supplier selection. “All selected suppliers for the machines in our new line have their own branches in the Kingdom of Saudi Arabia. 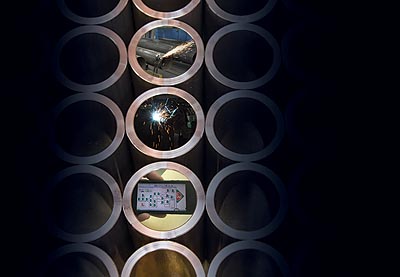 We have insisted that the local units are part of the whole negotiation process and that the contract for installation and erection of the machines are signed with the local unit,” reported Mr. Khonaini. “With this approach, we will support the international machine suppliers to build local subsidiaries in the Kingdom and transfer required know-how. This will also improve our access to aftersales services and spare parts,” he added.

After signing contracts for the sourcing of long lead items for the new line, GPC has also awarded the civil work. “We have a tight schedule and we have to get all foundations for the new machines ready before end of the second quarter 2018,” reported Mr. Fkaier. He added further: “The first foundation for the prebending machine is already under execution. We have to be very careful during the construction of the new foundations. The manufacturing activity in our existing line shall not be disturbed. A detailed and accurate planning approach is required.”

New major pipeline job
GPC has recently received a new major pipeline project from Saudi Aramco. The Arabian Heavy Oil Corridor project has been awarded to the mill in Jubail. The scope of supply contains three items of pipes with the diameter of 48” and wall thickness ranging from 15 mm to 22 mm. The total length in 165 km including about 80,000 MT of X65 steel material. The delivery of pipes is scheduled between mid-December 2017 and March/April 2018.

Conclusion
“The new line will help us not only to double our capacity, but also to streamline our manufacturing activities and produce each required pipe size on the suitable equipment. The new line will also allow us to close some gaps in our capacity matrix. This will help us to explore more opportunities in our home market and on the international market,” highlighted Mr. Fkaier. “Our new investment for the new line is a clear commitment to the localisation policy of the Kingdom of Saudi Arabia,” concluded Mr. Khonaini.

Services: Manufactures pipes for the oil and gas, water and construction sectors