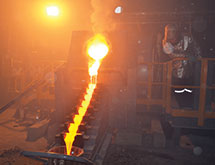 Gold is where you find it, and for Canadian junior exploration, development and production company GoGold Resources Inc., Mexico has proven to be a promising spot. President and CEO Terry Coughlan says GoGold Resources’ approach has served it well in Mexico so far, with a number of properties ready for production sometime in the next few years. He says the company distinguishes itself from other exploration companies by seeking out undervalued properties and bringing them into production.

“A lot of companies are looking for exploration projects, but we’re looking to build low-cost, low-capex producing mines,” Coughlan says.

GoGold Resources brings a wealth of experience to its projects in Mexico because the company’s principals have been working in the mining industry in Mexico for more than 17 years. Coughlan, an experienced executive in the mineral resource industry for nearly 30 years, founded GoGold with Strategic Advisor Bradley Langille about four years ago to take advantage of the numerous gold and silver projects in Mexico that for one reason or another were being underutilized. According to the company, the extensive experience Coughlan, Langille and the rest of the company’s executive team had in Mexico gave them particular insight into the best way to go about developing those properties.

“GoGold’s management team are veterans of successful mine development and operation in Mexico,” the company says. “In addition to their extensive business and government relationships, they have the knowledge, experience and financial acumen required to turn properties into profitable producing mines.”

Industry Savvy
Among the advantages GoGold Resources brings to the gold and silver mining market in Mexico is its strong financial standing, Coughlan says. “We have the ability to be able to fund projects,” he says, noting that recently GoGold Resources was able to raise nearly $80 million during one of the tightest periods for raising capital in the industry.

Coughlan also touts the considerable geological knowledge base within the company as one of the primary reasons GoGold Resources has been able to take advantage of its properties in Mexico. Coughlan holds a geology degree from Saint Mary’s University, and Langille has co-founded two other exploration companies and also held executive positions in several others. The company says Langille’s connections in the industry have been instrumental in GoGold Resources’ ability to raise capital for the projects it has developed itself in Mexico, and he has raised more than $500 million for the development and construction of mines.

COO Robert Harris has more than 20 years of experience in evaluating and developing gold and sliver projects, including the development of the Younga open pit gold mine in Burkina Faso, which currently produces 85,000 ounces per year. Harris holds a bachelor degree in science and a master’s degree in engineering from the University of New Brunswick, and he is a member of the Association of Professional Engineers of Nova Scotia.

Coughlan says the company’s vast stores of geological knowledge and industry savvy allow GoGold Resources to execute its primary strategy of finding projects that can be put into production quickly. This differs from the strategy of many junior exploration companies that focus on seeking out properties with the potential to become mines and establishing their potential value before selling them.

Prime Properties
Even though GoGold Resources has considerable strengths when it comes to its knowledge base, all of the mining experience in the world won’t help without a property on which to utilize it. Fortunately for GoGold Resources, it has two key properties in Mexico that look to become big producers in the near future, as well as serious exploration upside from its another property it gained through a strategic acquisition.

The Parral Tailings Project poured its first gold bar in June, and GoGold Resources expects to have the mine producing more than 5,000 tons of ore per day by the fourth quarter of 2014. Located in Hidalgo del Parral in the state of Chihuahua, the Parral Tailings Project has a history of mining that dates back more than 340 years, according to the company. That history has left more than 21.3 million tons of tailings on the 141-hectare site, which the company says represented a problem for the surrounding community and an opportunity for GoGold Resources.

“Located near the heart of the city, the tailings have become a nuisance to residents and an impediment to development,” the company says. “Fortunately, inefficient historic recovery processes left significant amounts of silver and gold in the tailings, which GoGold is now recovering.”

GoGold Resources acquired the rights to the Parral Tailings Project in July 2012 as part of a merger with Absolute Gold Holdings, which had spent 2011 and 2012 conducting a field campaign that included digging 188 trenches and taking more than 290 vertical channel samples. In February 2013, GoGold Resources completed its own pre-feasibility study, which projected an average annual production of 1.2 million ounces of silver and 11,000 ounces of gold over an anticipated 12-year lifecycle.

GoGold’s first exploration project is also impressive. The San Diego Project in Durango, Mexico, covers more than 71,000 hectares in the Sierra Madre Occidental Gold-Silver Belt, one of the world’s largest epithermal precious metal regions. “The San Diego area contains an epithermal gold-silver system that extends for more than 35 kilometers,” the company says. “Although the district has been mined on a small scale since the 1700s, there has been very little modern exploration until now.”

Coughlan says the company is continuing to evaluate San Diego and the company is very optimistic about its future. “It’s a fantastic project, in an area where local miners have hand mined gold for hundreds of years” he says.

The combination of the San Diego Project and the Parral Tailings Project – along with the Santa Gertrudis gold mine project it acquired in its purchase of Animas Resources earlier this year – gives GoGold Resources a lot to be optimistic about. Coughlan explains that by 2015, the company should be seeing the Parral Tailings Project reach its production goals, and by 2016 both it and the Santa Gertrudis Mine could be supplying the company with the cash flow it needs to pursue other projects.

Given GoGold Resources’ knowledge base and experience, it’s safe to say that those extra resources will be put to good use.