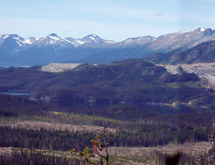 Vancouver-based Gold Reach Resources is in the midst of advancing its large Ootsa copper and gold (Cu-Au) porphyry deposit. The mineral exploration and development company owns a 100 percent interest in the 47,080-hectare property, located in the Omineca Mining Division of northwest British Columbia.

“Since 2011, we started taking a new approach to project exploration, compiling more information and looking at the science of these targets,” says Dr. Shane Ebert, president. “Last year, we drilled 45,000 meters at our property. We feel we will be able to attract major mining companies because we will have enough contained copper, gold and other metals.”

High Potential
Among the reasons why Gold Reach Resources has high hopes for the property is its location near the producing Huckleberry Mine. This means it is accessible from nearby roads and close to infrastructure, and the company has already identified multiple deposits that show potential for expansion.

“This is an established mining district, as we’re only a few kilometers from another open pit mine, which means the property is close to power and roads,” Ebert says. “The barrier to entry is lower here because the topography is flattish, the road access is good, ongoing development is in the area, and power is already here.”

The Ox Deposit contains a crescent-shaped zone of disseminated and vein-controlled porphyry Cu mineralization. As for the Damascus Silver Vein, it is a structurally controlled precious and base metal vein.

“We have taken a systematic approach to proving our targets,” Ebert says. “A lot of what we found is also attributable to having continuity in our technical staff over the last two years.”

Ongoing Efforts
2013 is already off to a busy start. The company recently announced that it had received assay results for the final eight holes drilled into the Ox porphyry, as well as for the final few holes of the Seel and West Seel deposits, during the 2012 drill program. Gold Reach Resources also announced that it signed a letter of understanding with the Cheslatta Carrier Nation, which is a critical step for future exploration because it outlines the terms for the relationship between the company and the nation.

Now, the company is moving forward with raising money for 2013 exploration and putting together its newest resource estimate, as well as looking to advance regional exploration and known deposits in ways that will add value and remove risk. “We are not developers, so we will either sell to or bring in a development team,” Ebert says. “We will work closely with our First Nations partners, and we will focus on baseline environmental characteristics so we understand the surface and do all the infill drilling and studies that can help design open pits and infrastructure.”

Ebert says there is much potential for the property beyond what is already explored, and Gold Reach Resources will continue to be on the lookout for lower-risk opportunities. As the size of its estimated resources grows, so too should its support from investors in North America, Europe and Asia.

“We have to look at the risk-return ratio because we have to focus on those things that have an appeal to the market and will drive value,” Ebert says. “The closer we get to production, the more value we must produce. We will keep expanding our resources, as we did five times between 2010 and 2011. Another big increase will have a big impact and will show there is a lot of potential for this property.”