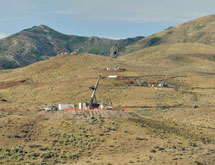 For Luke Norman, co-founder of Gold Standard Ventures Corp. in Vancouver, the Railroad Gold project in northern Nevada was his white whale, and he was far from the only Ahab. CEO Jonathan Awde and Vice President of Exploration Dave Mathewson also had been pursuing the property under different companies for nearly a decade before the principals finally were able to come together and form Gold Standard Ventures to take advantage of it.

For so many knowledgeable people to be so interested in a single property, it has to be something special, and Norman says the Railroad Gold project will be worth the time and effort put into it. With the experience and expertise Gold Standard Ventures has put together to work on the asset, Norman says the company believes it is on the precipice of finding something spectacular.

Not only does Gold Standard Ventures come to Nevada with a wealth of knowledge about the region, but Norman says the project has attracted the attention of some major supporters. Their capital contributions have given Gold Standard Ventures the breathing room and resources to make things happen at the Railroad Gold project.

Prime Property
Perhaps the most attractive aspect of the Railroad Gold project was its location, Norman says. “It was largely unexplored, an entire district within the Carlin Trend,” he says.

The Carlin Trend is one of the most prolific gold belts in the world, and the opportunity to gain a foothold in the region on a property that had not been systematically explored before was “a lure that was far too attractive to turn down,” according to Norman. The Railroad project represents the last significantly underexplored district in the Carlin Trend, according to the company.

Despite the property’s pedigree, however, the previous owner did not know how to properly harness the opportunity it represented. Norman says the landowner was more of an opportunist than an explorer, and as such did not know how to make the most of the Railroad Gold site. “You had this amazing land package, but as a whole he would cut these deals with grossly underfunded juniors,” Norman says.

It was because the property was in the hands of underequipped juniors that Norman and the rest of the future Gold Standard Ventures leadership team could make a play for it. Norman says they knew of some expiring leases on the property that the junior explorer there wouldn’t be able to keep up with. Working together, the company’s principals negotiated a transfer of the lease to Gold Standard Ventures in 2009.

Very Experienced
Around that acquisition, Gold Standard Ventures has built a geological team with significant experience in the Carlin Trend. For example, Mathewson formerly served as head of exploration for Newmont Nevada and managed exploration of the Rain District, which is adjacent to the Railroad project. “This team has found gold ore that has eventually been mined,” Norman says.

Gold Standard Ventures is employing a model-driven exploration technique that utilizes advanced methods successfully used by majors throughout the region. Additionally, Norman says the more than $6 billion in infrastructure already in place throughout the Carlin Trend will make gold discoveries worth a significant premium.

Significant Support
Norman says the Railroad project has attracted an all-star list of supporters and investors, led by FCMI Parent Co., which is controlled by Canadian billionaire Albert Friedberg. FCMI purchased an approximately 19.9 percent shareholder in Gold Standard Ventures, and Norman says the value of its contribution goes beyond pure capital. “Getting [Friedberg’s] stamp of approval really opened doors for us,” he says.

Other major firms including Oppenheimer Funds, Royce and American Century have joined as investors, which Norman says has bolstered the company’s standing. “I think that’s a standout thing that’s happened with our company very early on that has helped solidify our story and given other people comfort that we’re a well-managed operating company,” Norman says. EMI