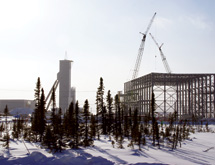 One of the fastest-growing senior gold producers in the world, Goldcorp has operations and development projects in various parts of the Americas. Headquartered in Vancouver, the company employs a strategy focused on growth, low cash costs, a strong balance sheet, operations in regions with low risk and responsible business practices.

The company’s operating assets include five mines in Canada and the United States, three mines in Mexico and two in Central and South America. In addition, Goldcorp’s pipeline includes projects in Argentina, Canada, Chile and the Dominican Republic.

One of the major projects in the pipeline is the Éléonore gold project in Québec. Located in the James Bay region of northern Quebec, Goldcorp purchased the project from Virginia Gold in 2006. Goldcorp views the project as a critical piece of its future growth. The project is currently on target for first production in late 2014.

Partnering Up
Perhaps the aspect most likely to determine the success of the project is its collaborative nature. The Éléonore project is situated in the territory of the Cree Nation, and in February 2011, Goldcorp and the nation signed a collaboration agreement.

“This is our first project in the region, and it is the first gold mine being built here in Cree territory in Quebec,” says Guy Belleau, general manager. “One of our key focuses is on partnership, and we have created a partnership with our Cree partners because we must have synergies with the people who are living on and using the land.”

The terms of agreement stipulate that Goldcorp must recognize and respect Cree rights and interests in the project area and that the Cree Nation recognizes and supports Goldcorp’s rights and interests in the project’s development and operation. The agreement also includes provisions that ensure the Cree Nation’s permanent participation in the development of the project, as well as employment and business opportunities and training and education initiatives.

“We meet on a regular basis in four committees created by the agreement,” Belleau says. “They are focused on the environment, hiring and training, business opportunities and the collaboration committee. Each is 50 percent Cree and 50 percent Goldcorp. In 2012, more than 30 percent of the project’s workforce was from Cree communities. We are helping with the start-up of a laundromat in the community of Wemindji. Sustainable investments in communities are very important to Goldcorp because we want it to flourish after the mine is gone.”

When production begins, it is expected to yield 285,000 ounces per year before reaching 600,000 ounces three years after production starts. To support the anticipated production, Goldcorp commenced a $1.4 billion construction program in 2011 to facilitate development of an underground mine, mill, permanent camp and infrastructure.

Development includes an exploration shaft that is seven meters in diameter and 715 feet deep, along with a ramp to the surface that is 1,600 meters in length. The second, production shaft is planned to reach 1,500 meters in depth by the time it is finished in 2017. Other aspects of development include investments in infrastructure, such as an access road, airstrip, electrical power supply and water provision.

“The water treatment facility will be able to handle 26,000 cubic meters of water per day,” Belleau says. “The mill will be a 7,000-tonne per day mill, and we’ve started construction on the permanent camp. Underground development is a major activity, as shaft sinking and ramp development are on schedule. All of our equipment is new and best in class.”

The mining techniques to be used will include long-hole stoping and down-hole drilling, as well as transverse stoping when necessary. Goldcorp will use Caterpillar trucks and loaders, Atlas Copco jumbo drills and McLean Engineering bolters in its equipment fleet.

Belleau believes constant improvement in health and safety and environmental performances, as well as continued success in hiring and training, will help the mine to reach its goal of production in late 2014. By combining health, safety and environmental best practices with a culture based on people and strong partnerships, Belleau feels the Éléonore gold project will be a resounding success.

“Safety promotes quality, efficiency, productivity and cost savings, and that will allow us to reach the 2014 target,” he says. “Everyone must be aligned with our objectives so we can keep identifying areas where we can improve. By emphasizing people, safety and partnership, we can build our reputation in this part of Quebec as an employer of choice.”