Back to Profile Gallery > Goliath Industries 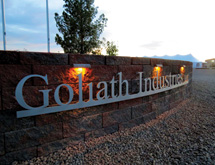 One of the most pressing needs in shale plays throughout the United States is for worker housing. The remote regions in which oil, natural gas and mining occur usually do not have the employee base or housing stock to meet the needs of the workforce.

Providing quality and safe housing for employees is the specialty of Goliath Industries. The company’s camps boast full-service kitchens, recreational facilities such as workout and game rooms, computer labs and single-room occupancy units. One location even has a restaurant to which the public is invited.

Working 12-hours shifts for 14 days straight keeps company employees too busy to do much more than enjoy the comforts of their camps. The image of the fun-loving roustabout going to town on a Saturday night is not borne out by experience. When companies provide housing, they are able to establish rules and regulations for their employees to aid in their retention.

“The oil companies spend thousands of dollars recruiting and training these employees,” Goliath Industries CEO and Managing Partner Todd Harris points out. “Safety is a huge factor. Our camps are all dry – no drugs, no alcohol, no fighting and no weapons. They’re run pretty strictly.”

Usually, there are only two periods of high activity at the camps: when the shifts change. “These camps come to life in the morning for a four-hour period, and then for a four-hour period in the afternoon,” Harris notes. Workers on the morning shift start getting ready between 4 a.m. and 8 a.m. “Crews get up, shower, get ready for work, pack their lunches, load up their equipment vehicles, take off and go to the site,” Harris says.

The same happens from 4 p.m. to 8 p.m., when second-shift crews prepare for work and the morning shift returns and has dinner. “They are pretty worn out,” Harris maintains. “There will be people watching TV, you’ll see guys Skyping with their kids and then the camp goes to sleep. They work 14 days straight, and in some situations, 28 days straight and no days off.” Then typically workers will have 12 days off before returning to begin the cycle again.

Camp Landlord
The camps are all owned by Goliath Industries on land Goliath buys or leases. Goliath provides all the infrastructure, plans and construction, and rents the space to the energy companies for their employees. “We always strive to obtain an anchor tenant,” Harris says. That would be a company that would sign contracts for anywhere from 20 to 200 beds for periods ranging from 90 days up to 24 months.

Goliath Industries was established three years ago to offer its full-service camps for companies. “Our first contract was in the Bakken and took off like a rocket,” Harris recalls. The company now operates seven camps and rents approximately 5,000 beds. Most of the camps are around the Bakken Shale but the latest is in Pecos, Texas, in the Permian Basin.

Building the Camps
Goliath Energy Services LLC, a sister company, provides fluid hauling and roustabout services on oil rigs in addition to the construction services for Goliath Industries’ camps. “We own our own construction equipment, have our own project managers and electricians and plumbers,” Harris says. “So we go in and do the development ourselves.”

The company also provides its own management and maintenance of the camps, as well as staffing them. “We hire locally when we can, but in a market like North Dakota, the unemployment rate is zero, and you’re forced to bring people in from other areas,” Harris says. “Our employees commute in from everywhere.” This includes North America, Alaska and Hawaii.

“We have some attrition,” Harris concedes. “People move on or get tired of being away from home all the time. We’ve got people that apply with us and continually check in. We keep a pretty substantial group of prospective employees in the mix at all times. As new jobs come on-line, we bring them onboard. So we’ve always got a pool to pull from.”

Keeping Camps Full
Goliath Industries keeps its camps at 80 percent occupancy. “You spend an awful lot of time evalutating a market or region before you put these camps in because you’ve got millions of dollars invested,” Harris emphasizes. “We try to get our money back in 18 to 24 months. I want a good, solid asset; I want it very functional. These are 30-year assets.”

The cost of the camps varies depending on the amount of infrastructure that is available and land prices, which are escalating continuously. Goliath typically installs all water, sewer and electricity and does the civil, earthmoving and landscaping work. The 600-bed Pecos camp will cost $4.5 million, but an equivalent facility in North Dakota is costing more than $10 million because of the increased infrastructure required.

The camp buildings are manufactured by several companies that specialize in these types of structures. The buildings are arranged with common corrodors so the laundry, recreational areas and kitchen can be accessed without going outdoors. The buildings even can be disassembled and moved if the business shifts to another location.

Many of Goliath’s camps are planning second phases of expansions. The company recently has expanded into Oklahoma and into Colorado for natural gas drilling, and is negotiating to build a camp for miners in Nevada. “Goliath Energy Services will be one of our bigger customers when we open the camp in Oklahoma,” Harris says.