Located in the Western Pacific, Guam is an unincorporated territory of the United States, a progressive Pacific island community, and a strategically important link between the US and Asia. There is a crucial relationship between energy and Guam’s economic growth, and as the island continues to progress, there is a need for Guam’s energy mix to evolve because power is an important catalyst for commercial and domestic advancement.

On the electricity side, energy is supplied by The Guam Power Authority (GPA), an electric utility that supplies 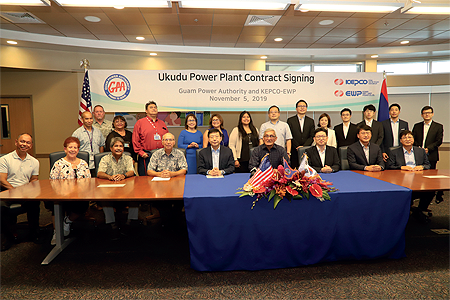 monopoly electric services throughout Guam, including to all US Department of Defense military bases, various components of the Government of Guam, and a vibrant shopping and hotel industry. GPA serves an island population of approximately 170,000 (with around 52,000 of these as customers) with a 2019 peak demand of 254 megawatts and 2019 (fiscal year) energy sales of 1.57 billion in kilowatt hours.

As John M. Benavente, PE and General Manager at GPA explained, the Authority is a public corporation and autonomous component unit of the Government of Guam. “The Consolidated Commission on Utilities (CCU) – comprised of an elected five-member board of commissioners – provides governance over GPA, while the Guam Public Utilities Commission (GPUC) sets GPA rates and holds oversight of the authority, to include review and approval of all large GPA contracts impacting rates and charges,” he said.

Owning assets of $955m, including 29 substations, and 1797 miles of combined transmission and distribution lines, GPA employs a workforce of 450 and supports Guam’s economy with both conventional and renewable electrical energy. The island-wide power supply that comes from various fuel-oil based generating units has a gross capacity of over 420 megawatts. “Currently, GPA also has 25.3 megawatts of renewable capacity with an additional 160 megawatts of solar photovoltaic and 150 megawatts of energy storage systems coming online in the next three years,” added John, “which is going to achieve a 25 per cent government-mandated Renewable Portfolio Standard (RPS).”

Further elaborating on the thinking behind the energy transition from fuel oil to renewables, John pointed out that GPA’s energy has been generated by fossil fuels for the past five decades, which made Guam vulnerable and at the mercy of global fuel oil political changes. Fuel oil purchases also total more than half of GPA’s budget. “It is a significant economic drain on Guam’s economy because it lacks multiplication effects,” he said. “By converting fuel oil purchases to alternative energy purchases such as photovoltaics, Guam is converting oil to jobs, while at the same time reducing its carbon footprint and impact on the planet.”

Having already appreciably transformed how Guam generates its electric power, GPA is now working on a project that will result in a significant paradigm shift in how it supplies energy to the island. It has signed contracts with KEPCO for the construction and operation of the new Dededo Ukudu Combined Cycle Power Plant, which will replace its ageing and limited baseload power supply. This 198-megawatt combined cycle plant, with a 51 per cent thermal efficiency, is designed to be the cornerstone that helps to sustain Guam’s energy needs. “We are investing in dual fired (Ultra-Low Sulfur Diesel and Natural Gas) high efficiency combined cycle technology, coupled with low and stable cost renewables (20-year, one per cent escalator contracts),” said John. “The plant will allow us to hedge against fluctuating fuel oil prices because over time we will continue to reduce the volume of fuel oil we use by substituting with photovoltaic energy sources. It will work well with renewables, and, in fact, will be the backup to renewable energy to ensure continuous power to the island, in the event of non-solar days and natural disasters.” 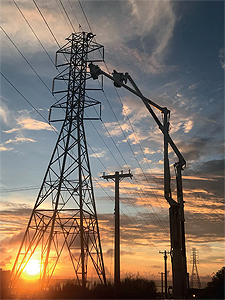 As part of its commitment to transforming into a modern, sustainable power generation company, over the next few years GPA will be contracting for an additional 180 megawatts of renewables to be commissioned beginning in 2024 and beyond. “All renewables must have adequate storage systems for full capacity load shifting capability. All contracts will comprise a power purchase agreement for 25 years or more. The majority of this capacity will be utility-scale renewables, but the program would also include rooftop solar and small energy farms, perhaps in the one to five megawatt range,” John detailed. “This plant, coupled with renewables, will allow GPA to achieve 50 per cent renewables, most likely before the end of this decade,” he added.

Alongside the investments that are being made on the solar energy side, GPA has also been incorporating other associated technologies to work with renewables, including Advanced Metering Infrastructure (AMI) systems, which were installed in 2012. “We have also been upgrading our billing systems in order to accommodate net metering customers, which now total about 2100, having a total photovoltaic capacity of 24 megawatts,” added John.

“Additionally, GPA has an ongoing Demand Side Management (DSM) program to right-size customer consumption and assist them in lowering their total energy cost. Over the last four years, GPA has paid over $4m in customer cash rebates to over 10,000 customers. GPA’s current budget is to provide $3m annually, funded through its fuel adjustment rate component, in support of energy efficient projects. GPA estimates that for every $3m in rebates paid, this decreases fuel costs by about $21m over the typical seven-year estimated life of the equipment.”

While it is apparent that GPA is very determined to move away from conventional fossil fuel based power and embrace modern, sustainable solutions, its overall mission always remains to deliver safe, reliable and quality electricity services to all customers. In fact, safety is a core value of the company’s culture, not just for end-users, but for staff too. “I have been general manager of GPA for over 25 years, and in nearly all those years, GPA has consistently placed highly, in the top three safety categories for its utility workforce safety performance,” remarked John. “The annual American Public Power Association’s safety awards recognize utilities with the lowest safety incidence rate within their groups. Groups are determined by worker-hours of exposure. For 2019, GPA earned a third-place award in the ‘Group F’ category for utilities with 250,000 comto 999,999 worker-hours of annual worker exposure.

“Safety is of primary importance to myself and my entire team and GPA provides significant resources and training to ensure safety first, across all areas of the power utility. The business will continue to strive to perform and be ranked among the safest electrical power utilities and do everything it can to send all workers safely home to their families each and every night.”

Having mentioned his staff, John then went on to discuss the challenge of finding the qualified personnel and how GPA addresses this issue: “GPA makes certain it maintains a highly professional and technical group of employees having adopted a pay-for-performance employee pay structure, which rewards its employees and assures a competitive pay structure and benefits today, and into the future. GPA, through this pay structure, has become a premier employer of choice on Guam; always drawing a significant interest and numerous applicants for positions listed for hiring.

“The organization also runs apprenticeship and other training programs, especially in the transmission and distribution and power generation fields.”

The responsibility that GPA feels for its employees also extends out further to the wider community across the territory, because as John succinctly puts it, ‘everyone who lives and works on Guam depends on the Guam Power Authority to operate one of Guam’s most critical resources, namely the island-wide power system.’ “It is important to GPA to work with the local communities it serves,” he confirmed. “From as far away as the US Virgin Islands to the nearer Commonwealth of the Northern Mariana Islands (CNMI)-Saipan, GPA is committed to, and has provided, mutual aid assistance for recovery and restoration following devastation caused by natural disasters. In 2019, GPA received a ‘Mutual Aid Commendation’ from the American Public Power Association for having answered the call for assistance and aided the devastated CNMI-Saipan community with restoring power to its customers and helping rebuild an entire island economy.”

Furthermore, in 2019, GPA received a Smart Energy Provider (SEP) designation for best practices as an electric power utility that shows commitment to, and proficiency in, energy efficiency, distributed generation, renewable energy, and environmental initiatives. Additionally, achieving SEP designation allows GPA to benchmark and evaluate its work against a set of industry best practices in defined areas.

Also in 2019, GPA was recognized as the first electric distribution utility to operate business critical functions on the Environmental Systems Research Institute (ESRI)’s Utility Network Data through tapping drones to digitally map GPA’s power lines, poles and other hardware and help GPA with maintenance forecasting, deployment of manpower and equipment. This translates to GPA being able to deliver its ambitions of building a stable foundation of economic growth and quality of life for all its customers and the community on Guam.

Thanks to the steps it has already taken and the plans it has for the future, GPA is well on its way to becoming a modern, efficient energy provider, and John believes that within the next three to five years, the organization will achieve its goal in attaining an improved position of strength. “GPA will have significantly achieved the paradigm shift in energy supply to providing its ratepayers with reliable energy at coman affordable and stable cost,” he predicted. “It will also have begun its journey towards a fully underground system for the entire island, which could then be achieved in an affordable manner over the next 30 years. GPA’s island-wide power system consists of 90 per cent concrete poles today, making it resilient and providing for quick recoveries following devastation caused by storms. I envision GPA will begin the journey forward to fully underground the electrical power system within the next few decades, so that Guam becomes an even more sustainable island, less vulnerable to economic and natural disasters.”

John is understandably very proud of the transformation that GPA has gone through. “Over the past 50 years, GPA, through its founding employees and today’s team of professionals and staff, has striven for sustainability and an ever-improving quality of life for our extremely remote island. Today, we see light at the end of the tunnel and this truly is exciting and commendable,” he concluded.