Gulf Keystone Petroleum Ltd. is an independent oil and gas exploration and production company with operations in the Kurdistan Region of Iraq, and offices in the capital city, Erbil and London, UK.

The company established itself in the region in 2007 and has since made significant progress with five discoveries across four blocks, including the world-class discovery of the Shaikan field in 2009, from which commercial production and crude oil exports commenced in 2013.

Having progressed so rapidly in a relatively short time, Gulf Keystone’s finance director Ewen Ainsworth provides an update on the company’s near-term objectives and ongoing interests in an interview with European Oil and Gas Magazine: “Our immediate focus is to ramp-up production at Shaikan, develop a flexible marketing strategy for our crude and continue exploration, appraisal operations and also commence early production on the Sheikh Adi, Ber Bahr and Akri-Bijeel blocks, all with discoveries. To date, nearly 20 wells have been drilled or are being drilled across Gulf Keystone’s acreage in order to realise multi-billion barrel resource potential.

The Shaikan Field Development Plan (FDP) was approved in June 2013, granting Gulf Keystone full permission to commence commercial production from the field and representing a key milestone for the company, with the production beginning just one month later. Gulf Keystone announced the commencement of crude oil exports from the Shaikan field in January 2014. “The first Shaikan production facility, PF-1, is in operation with two wells currently tied to the facility and work on the second Shaikan production facility, PF-2, is nearing completion. We commenced commercial production and crude oil exports from the Shaikan field with the aim of ramping up production to meet our near-term target of 40,000 barrels of oil per day in 2014 and then the overall Phase 1 target of 100,000 barrels per day.”

Production from the Shaikan block is set to play a crucial role in helping the Kurdistan region to achieve its overall oil export targets, which will be of huge significance to the development of the region as a whole. Alongside progress in the Shaikan field Gulf Keystone has also developed its corporate social responsibility (CSR) strategy, which has advanced dramatically over the last 12 months with the aim of supporting the communities living in the areas in which the company operates. “CSR is an important part of our business, we need the support of surrounding communities in order to run our operations effectively and we aim to reflect the support we receive via our CSR strategy. Our initiatives include projects such as the building of event halls, water pumps and access roads, and supplying schools and youth centres with equipment that they require. We are also passionate about training and recruitment in the region and have very successful competency-based programmes in place. At least 75 per cent of our workforce is local personnel and wherever possible, outsourced contracts are awarded to regional operators,” says Ewen.

Health, safety and environmental considerations remain core values for Gulf Keystone and it recognises its obligation to identify and reduce risks, safeguard people and protect the environment, assets and the communities surrounding its operations. Through its commitment to ensuring positive leadership, hazard assessment, risk management and excellent 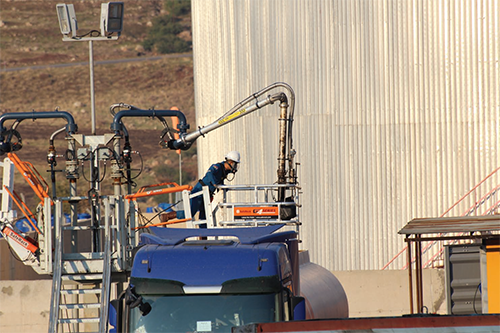 communication channels on the ground, the business has been able to achieve this target.

Moving into 2014, Gulf Keystone is continually growing and evolving, as Ewen comments: “We have made significant operational progress over recent years; we are in a key position with working interests in four adjacent on-trend blocks and five discoveries in the Kurdistan Region of Iraq. Shaikan was declared commercial in August 2012 and in November 2013 so too was the Akri-Bijeel block, based on the Bijell-1 and Bakrman-1 discoveries.” At the end of 2012, Gulf Keystone made a new discovery following a successful well testing programme of the second exploration well on the Sheikh Adi block, and in May 2013 Gulf Keystone’s partner Genel Energy made a commercial discovery on the Ber Bahr Block.

In October 2012, Gulf Keystone was successful in its first bid to raise funds via a placement of senior unsecured convertible bonds, due October 2017 for an amount of $275 million. In November 2013, a further $50 million was raised through a tap issue of these convertible bonds, confirming investor interest and providing funding to reach the Shaikan field development plan early production targets. The company’s increasing production will provide a recurring revenue stream allowing for future funding options.

“In 2014 we will continue implementation of the FDP, increase Shaikan field early production and sales, and obtain and evaluate results of the Shaikan-7 deep exploration well. We will be evaluating the Sheikh Adi discovery, targeting additional exploration potential, and commence early production from the Bijell-1 extended well test on Akri-Bijeel, while continuing to appraise the Bijell and Bakrman discoveries on the block and assess the Ber Bahr discovery.

The process is underway on the company’s proposed move from AIM to the Standard Segment of the Official List, the current expectation is for the admission to be achieved as soon as practicable in 2014.

Targeting future outlook, the Phase 1 development drilling campaign on the Shaikan block is on the company’s radar. “As set out in the FDP, we will be undertaking an active development drilling campaign as well as installing additional production facilities. A review of the FDP will include Phase 2 Cretaceous, Triassic and, potentially, Permian development. A key element of the FDP is the commencement of a sour gas injection project. Shaikan-8 was completed as the first sour gas reinjection well and bids have been tendered for gas compressing equipment required to increase plant production capacity, which is subject to well performance and emissions constraints, from the near-term production targets. We expect to finalise the sour gas injection project in 2015,” explains Ewen. “In due course we anticipate being in a position to use free-cash-flows achieved from production and export to continue to grow our business.”

Success in the region has been supported by longstanding relationships with the Kurdistan Regional Government’s Ministry of Natural Resources, as well as transparency with surrounding communities and businesses in the areas of operation. “We value these relationships as they have been, and continue to be, essential to our success. We are working hand-in-hand with the Ministry to help the region achieve its overall oil-export target. We still have active exploration upside in the Kurdistan Region of Iraq and we are committed to realising the full potential of all four of our blocks,” concludes Ewen.