Back to Profile Gallery > Gulmar Offshore

Since it was first established in 1998, the Gulmar Offshore Group has grown to become a major subsea contractor and ship-owner, with its own large fleet of subsea support and construction vessels. With a long experience in the subsea industry, Gulmar’s operational capabilities range from the shallowest to the deepest waters.

The business is divided into three principal areas of operation – the installation and commission of subsea infrastructure, umbilical, riser and flow line systems (SURF) as well as general subsea construction, a comprehensive range of subsea inspection, repair and maintenance (IRM) services, including diver and remotely operated vehicle (ROV) intervention, and a complete package for field mapping, pipeline route surveys and investigations (FPI) of the root causes of field and pipeline anomalies.

In 2010, Oaktree Capital became the major shareholder of Gulmar, bringing with it significant industry experience to the benefit of the company. By way of an introduction to the business, Ingemar Curtsell, senior vice-president of strategic development says: “Using our own fully owned IMR and construction vessels, supported by our engineering and project management resources, we are able to provide flexible, constructive and effective solutions to our clients. We have been operating globally for the past decade and have built up a long track record with major oil and gas companies such as Statoil, Total, BP, Shell, Aramco, Qatar Petroleum, Maersk Oil Qatar, Punj Lloyd, Pemex, British Gas and Aker Marine, amongst others.”

Currently Gulmar owns and operates four DP vessels – ‘Gulmar Falcon’, ‘Gulmar Eagle’, ‘Gulmar Condor’, and ‘Gulmar Badaro’, which are all available on long or short-term charter. Since Gulmar purchased it, each vessel has undergone a substantial refurbishment project including the installation of new facilities. As a result each vessel incorporates different features and capabilities, enabling Gulmar to take on a wide scope of projects. 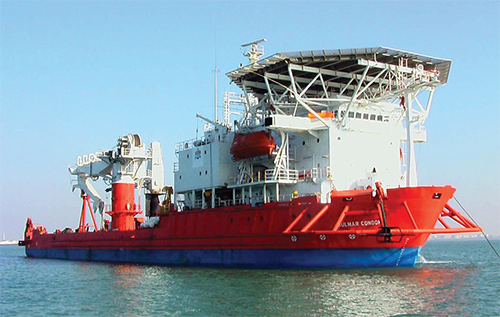 With a built-in nine-man saturation system and surface diving facility, the Gulmar Falcon is well suited for IMR work, completing projects in the Persian Gulf and Gulf of Mexico. The Gulmar Eagle is also ideal for IMR work including ROV deployment due to its built-in twin DDC, twin launch and recovery system (LARS) through moon-pool and control room allowing for efficient surface diving management. The vessel has performed traditional surface diving operations in Venezuela, as well as installation of small pipelines and risers due to a creative modification of the vessels operation mode. Following its purchase in 2007, the Gulmar Badaro was converted to a DP2 accommodation support vessel with 244 beds and a 68 tonne crane.

The Gulmar Condor is able to undertake all kinds of hook-up projects, including ROV support and is currently in the process of being upgraded further with a new 12-man saturation system, three-man bell and 12-man self-propelled hyperbaric lifeboat planned for installation in early 2011.

At present Gulmar is in the process of expanding its fleet through the addition of two-new build vessels. The first of these, the Gulmar Atlantis, is due for delivery in February 2011, followed by its sister vessel, the Gulmar Da Vinci, a few months later. These latest generation diving and ROV support vessels have state of the art capabilities including an 18 man 300m-rated diving system, twin three-man diving bells, twin 18-man self-propelled hyperbaric lifeboats, 18,000 cubic metres of under deck gas storage, and a 140 tonne AHC crane with 2500 metre hook depth capacity and 70 tonne hook load.

In addition both vessels have a large free deck space of a total 1350 square metres between the main deck and ROV deck allowing a load-out of 3300 tonnes of client equipment. “These new vessels will ensure the group is ideally positioned in the subsea construction market and will complement our existing fleet of four DSV and accommodation support vessels. We already have significant interest in these new vessels, although at present they remain uncommitted,” explains Ingemar.

In terms of applying its capabilities in the field, in 2007 Gulmar entered into a major project for PDVSA in Venezuela, which ended in 2009. “This project was a very challenging endeavour, yet the operational performance was well above our expectations,” says Ingemar. “The overall task including performing baseline mapping over a large area due to the lack of any charts or references of structures and pipelines. This survey covered a 20,000 km area, including the positioning of about 5200 platforms. We also undertook the repair and refurbishment of 665 oil and gas lines and associated risers, including 800 repair clamps installed over identified leaks. Finally we installed approximately 100 new small size pipelines with risers on both ends. The project was subsequently terminated in 2009, when the Venezuelan government took it over as part of its nationalisation of the oil and gas sector.”

With this in mind, Ingemar elaborates on the current conditions of the market: “Despite the current market difficulties, the global subsea oil and gas market is predicted to grow over the coming decade. Whilst the present uncertain economic climate is slowing down the decision process for new investments and exploration, it is definitely recovering. To meet the rising global energy demand, the trend today is in the development of deeper water exploration and production, which is made possible through technological innovations. Our new vessels are being delivered in front of this new market upturn, and will position Gulmar strongly for deep diving and ROV intervention in this market.”

Certainly the last two years have been a difficult period for Gulmar following both the financial crisis and the nationalisation of its Venezuelan project. Despite this the company’s forward-thinking and long-term strategy for the future means that it retains a strong position in the industry. “Following the introduction of our major new shareholder, Oaktree Capital, a restructuring of the company has taken place including the introduction of sound financial governance which provides us with a solid platform for future operations and expansion. With this foundation and the delivery of the two new-build DP2 DSV’s, we are looking forward to an exciting near and long-term future in the expanding subsea industry. At the moment we are continuing with our expansion strategy by developing our services, building new alliances and reaching new regions globally to better serve our clients in the oil and gas industry, as well as the possibility of both organic growth and through acquisition,” concludes Ingemar.